Paul Bostaph (Slayer) has revealed that he is working on a new project with a “friend” who is “very familiar.” He didn’t provide too many details, but a comment from Jason Bittner (Overkill, etc.) seemed to suggest that Bostaph and two other members of Slayer’s final lineup, Kerry King and Gary Holt (Exodus), are working on something with Phil Anselmo (Pantera, etc.). However, this is just an unconfirmed rumor and Holt previously said that he was planning to focus on Exodus after Slayer’s final tour, so his inclusion seems a bit unlikely. 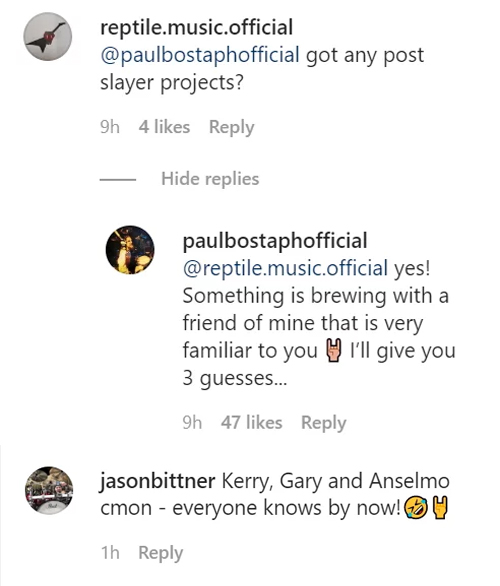 I figured this was a good time to do some home improvements. I’m hoping that we knock this spike down! Remember, we are all in this together. It’s affecting us all. Please stay home no matter how hard it is to be cooped up all day. Let’s do it for each other and our elders as well. I have a surprise coming next week to hopefully help with the boredom. Wishing you all… All The Best! #stayhome #stayhealthy #staysafe #staypositive

“As it pertains to En Minor, I’m happy to announce we are partnering with Season Of Mist in Europe and Ward in Japan. This is excellent, and on behalf of En Minor, I’d like to thank them both.”

Season of Mist are proud to announce the signing of @officialenminor , the new 'Depression Core' project of Philip Anselmo. The band will release their debut full-length via Season of Mist (in Europe) later this year. EN MINOR comment on the signing: "As it pertains to En Minor, I’m happy to announce we are partnering with Season of Mist in Europe and Ward in Japan. This is excellent, and on behalf of En Minor, I’d like to thank them both." For a glimpse of what's to come, check out EN MINOR's music video, which was filmed at Anselmo's home and barn-studio, on YouTube Stay Tuned! . . . . . #enminor #philipanselmo #depressioncore #depressiverock #seasonofmist #newmetal #newsigning

It looks like Rex Brown is open to doing a Pantera tribute tour with frontman Phil Anselmo and guest guitarist Zakk Wylde. The bassist said “I’m in!!” while responding to a Loudwire story in which Rita Haney, the longtime girlfriend of the late Dimebag Darrell, said that she would be okay with a hypothetical tour.

“As far as trying to put Pantera back together? No, that’s distasteful without those other guys. But I think as a tribute, it would be a really great thing because I know, from a fan’s point, if I hadn’t been able to see them play or hear those songs – I can imagine other people as well, I think it’s great that they could at least see it performed, and by people that truly love ’em. So, yeah, I think it would be a really cool thing.”

Phil Anselmo recently played Pantera’s “We’ll Grind That Axe For A Long Time” live for the first time. The performance took place during The Illegals’ January 30 show at the Umeda Club Quattro in Osaka, Japan. Anselmo told the audience the following:

“These songs always, always, always are a tribute and love to Vinnie Paul and Dime. Pantera never played this song that we’re about to play — we never played it live. This is the first time we’re performing it live ever. Hey, this is special. This is one for the hardcore Pantera fans.”

On December 20, Phil Anselmo’s En Minor project played their third live show at One Eyed Jacks in New Orleans, LA. You can see footage from the concert below:

Phil Anselmo’s En Minor project will be taking the stage at One Eyed Jacks in New Orleans, LA tomorrow night (December 20). This will be the band’s third live show.

Prior to Vinnie Paul’s tragic death, there was some talk about the possibility of doing a Pantera tribute tour with Zakk Wylde (Ozzy Osbourne, Black Label Society, etc.) filling in for the late Dimebag Darrell. Now, during a recent interview on The Cassius Morris Show, Wylde said he is still open to the possibility of doing something with surviving Pantera members Phil Anselmo and Rex Brown.

“When Saint Vinnie was still around, they were talking about it then. I mean, the way I always looked at it is it’s a Pantera celebration and an honor. I mean, every night I’m playing with Ozz, we honor Saint Rhoads. I’m playing the Randy stuff every night, and I’m blessed and it’s an honor to do it. Basically, we’re paying tribute to Randy every night — keeping his music alive.

If we got together and we ended up doing it, it would be like… I just look at it like if Eric Clapton went out and was with Mitch and Noel and singing and playing Jimi’s songs, and he’s honoring Jimi, ’cause that was his buddy.

If Zeppelin was going out, and if Jason’s playing drums, no one’s replacing his father. What they’re doing is celebrating his father’s greatness and what he achieved and all the mountains he conquered with Zeppelin.

It’s more of a tribute and a celebration than it is… You can’t replace any of these people I’m talking about — they’re all legendary guys. But, yeah, you’re just celebrating all their achievements — that’s all.”