Accept have shared a visualizer for their new song “Zombie Apocalypse.” This track is from the band’s new album “Too Mean To Die,” which will be released on January 29. Mark Tornillo commented:

“They’re everywhere, they can’t put them (mobile phones) down. They can’t keep them charged; they can’t take their eyes off the screen! It’s a zombie apocalypse!”

Accept will be releasing a music video for their new song “Zombie Apocalypse” on January 15. You can find a teaser for that below. The track is from the band’s new album “Too Mean To Die,” which has since been delayed until January 29.

“Unfortunately, with a heavy heart we have to postpone the release of our new album, ‘Too Mean To Die’, from January 15th to January 29th, 2021.

Due to a COVID-19-related pressing plant closure, the finished product has been massively delayed so that the planned release on January 15th, 2021 cannot be kept. We are very sorry about this and we hope that all ACCEPT fans are understanding of this very unfortunate situation and continue to support the band. It has been over three years since the last ACCEPT album, so we hope you can wait another two weeks for the new record.

In order to shorten the waiting time for you, we have decided to release a new video for the track ‘Zombie Apocalypse’ together with a digital single on January 15th, 2021.”

Accept have premiered a lyric video for their new single “Too Mean To Die.” This song is the title track of the band’s new album, which will be released on January 15. Guitarist Wolf Hoffmann commented:

“We decided to not let ourselves be overly influenced by current events. Fans will get a hard, direct and uncompromising metal album, but, of course, accompanied with a wink: we are too mean to die! Weeds do not go away! Accept do not let themselves get down!”

“Too Mean To Die” Track Listing:

Accept have premiered a new video for their new song “The Undertaker.” That track is now available in digital outlets and on 7 inch vinyl, along with a live version of “Life’s A Bitch” from a 2019 show in Oulu, Finland. It will also appear on the band’s new album “Too Mean To Die,” which is set to be released on January 15. The cover art for the record will be revealed when “The Undertaker” hits 500,000 streams.

Accept will be releasing a new single titled “The Undertaker” on October 2. The two-track single will be available digitally and on 7 inch vinyl and it will also include a live version of “Life’s A Bitch” from a 2019 show in Oulu, Finland. “The Undertaker” will appear on the band’s upcoming album. 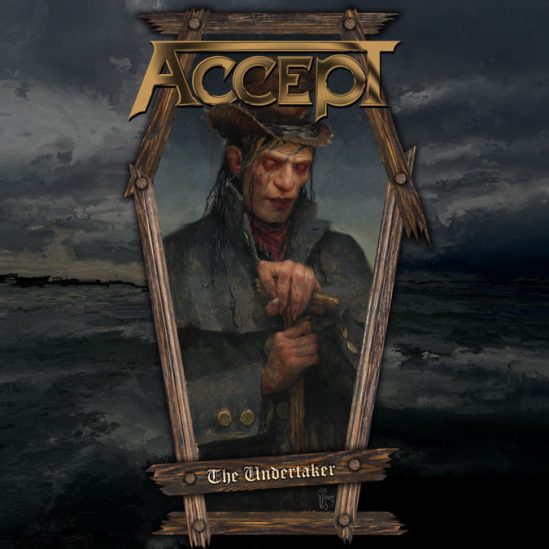 Former Accept members Udo Dirkschneider, Peter Baltes, and Stefan Kaufmann have shared a video for their song “Where The Angels Fly.” The track, which also features Sven Dirkschneider and Manuela Markewitz, was recorded in support of frontline workers.

Michael Tyler Tornillo, the son of Accept singer Mark Tornillo, has sadly passed away at the age of 26. The band issued the following statement:

“In Loving Memory of Michael Tyler Tornillo. It is with great sadness that we join Cheri and Mark Tornillo as they mourn the loss of their beloved son, Michael Tyler Tornillo, who passed away on Sunday, August 9th. Their grief is unimaginable and we ask everyone to kindly respect the family’s privacy during this difficult time. We appreciate your love and support for Cheri, Mark, their daughter Nicole and her husband Matt and baby Nate. May they find peace and comfort in the days to come! The ACCEPT Family”

During a recent appearance on the “Rock On The Rise” podcast, Mark Tornillo offered an update on the new Accept album. The singer said the band are about “nine songs in” and that the new material is “heavy and dark.”

“When this [coronavirus pandemic] first started, I had been back and forth to Nashville a few times — or a couple of times, anyway — working with [guitarist] Wolf [Hoffmann]. And when they found out that the JUDAS PRIEST tour was getting canceled also, [longtime ACCEPT producer] Andy [Sneap, who plays guitar for JUDAS PRIEST] had some free time, so Andy went to Nashville. So I went back, and we damn near recorded the whole new album.”

“We’re nine songs in. They’re not all complete… We’ve written, I would say, somewhere around 15 or 16 songs, so that’s what we actually got to record. There are some rhythm tracks done on some of the other ones, but I didn’t get to sing them. And some things, I think, might actually be complete, which Andy may be mixing at this moment. But there’s talks of us dropping a single this summer and hopefully getting this thing out by Christmas, if possible. We’ll see how that plays out.”

He also added the following about the departure of bassist Peter Baltes:

“We kind of knew it was coming. He was unhappy for, I’m gonna say, a couple of years — from ‘Blind Rage’ [2014] on. And, really, nobody could get a grip on why or what was going on. We were touring, and he’d be staying away from everybody. It was kind of weird. So we had a kind of feeling that something was gonna happen. I think he and Wolf and Gaby [Hoffmann, ACCEPT’s longtime manager and Wolf’s wife] might have actually been talking about it at the time, but nobody saw it coming like that. We got blindsided.

“This is the first [album] without him playing bass, and it’s also the first album without him as a writer. So the weight of the whole thing pretty much falls upon Wolf and I, relying on the other guys for help. And Gaby” — also known throughout the ’80s by the mysterious alias “Deaffy” — “still has her two cents in there sometimes, which she does. I write all the lyrics at this point, but I still rely on her for some lyrical ideas, and she never disappoints.”

Accept have welcomed Philip Shouse to the band as their third guitarist. Shouse was originally recruited to fill in for Uwe Lulis, who is recovering from surgery, but the group have now decided to keep him on as a permanent member.

“BIG NEWS!!!!!! – ACCEPT are getting ready for two upcoming North American dates next week on November 8th at the Arcada Theater in St. Charles, IL and November 10th at the Foamhenge Festival in Houston,TX.

Unfortunately, Uwe Lulis will not be able to join us for these two shows as he recuperates from recent reconstructive surgery on his leg from injuries he received to it in a near fatal motorcycle accident a decade ago. Uwe has dealt with the injury for a long time and has had many surgeries as a result.

In the process of finding coverage for Uwe for these shows, everybody remarked how they loved working with Philip Shouse during this year‘s Symphonic Terror Tour so we asked if he could help us out for these two shows. To our and Uwe’s great relief – he said yes!

During the next few days as lots of e-mails and discussions about the Ins and Outs for the 2 gigs and rehearsals in Nashville lead the band to an unexpected question: Why doesn‘t Phil join us and stay as a permanent member of ACCEPT? The answer? It was unanimous! Everyone agreed and Phil did too!

After his recovery, Uwe will continue to tour with ACCEPT and rejoin the guys for the upcoming South American shows in December. Wolf in support of his bandmate says, “Uwe became a great friend for all of us and after his recovery he might need to adjust his stage moves a bit – which is no problem with all the support he has from us! We are here for you, brother!”

ACCEPT would like to welcome Phil into the band and wish Uwe a speedy recovery and invite the fans to see this brand new ACCEPT version with PHIL, UWE & WOLF on Guitar, CHRISTOPHER on drums, MARTIN on bass – and THE Voice: Mighty MARK TORNILLO!”

Accept have released a new 7″ single titled “Life’s A Bitch.” The effort comes with the new title track on the a-side and a live version of “Restless And Wild” from Wacken 2017 on the b-side. You can stream “Life’s A Bitch” below. Wolf Hoffmann commented:

“We love the title of the single… Who does not agree to that ‘life’s a bitch’? It is universal, even if the stories are different. Everybody knows what that means!”