Green Jellÿ will be releasing a new album titled “Garbage Band Kids” on June 11. The effort will feature various guests including “Weird Al” Yankovic and members of Suicidal Tendencies, Kittie, Fishbone, The Dwarves, Piledriver, Hacksaw Jim Duggin, and more. The band also got some help from their fans as well. Notably, the album cover features visual representations of each song that were designed by one of the creators of Garbage Pail Kids trading cards. It will also be able to “come to life” through the augmented reality app Artvive. The effort’s first single, “Punk Rock Pope,” can be found below:

Fear Factory have shared an age-restricted video for their new song “Disruptor.“ This track is from the band’s new album “Aggression Continuum,” which will be released on June 18.

“Aggression Continuum” will be the band’s last album to feature ex-frontman Burton C. Bell. Guitarist Dino Cazares said the following about the effort:

“This record is one of my proudest achievements and I’m really excited for it to finally be released. There were a lot of personal struggles, sacrifices, and legal issues involved with this record which almost didn’t see the light of day, but through passion determination, lots of hard work and not giving up the fight, it’s finally ready for the world to hear. I felt that I needed to prove myself once again as I always try and make each record better than the last. Listen, and understand! This album is pissed! It can’t be bargained with. It can’t be reasoned with. It doesn’t feel pity, or remorse, or fear and it absolutely will not stop, ever, until you are hooked. You must fight to survive in the Aggression Continuum.”

Fear Factory have announced that their new album “Aggression Continuum” will be released on June 18. The record will be the band’s last to feature ex-frontman Burton C. Bell and its first single, “Disruptor,” will be released tomorrow (April 16).

Darko, the project featuring Tom Barber (Chelsea Grin) and Josh Miller (Emmure), have confirmed that their new self-titled album will be released on May 7. Pre-orders are available HERE.

Light The Torch have announce that their new album “You Will Be The Death Of Me” will be released on June 25. A video for the effort’s first single, “Wilting In The Light,” can be found below:

“You Will Be The Death Of Me” Track Listing:

Frontman Howard Jones said the following about the record:

“‘You Will Be The Death Of Me’ has been a journey — even without the pandemic. This album has been emotional and rewarding in every way, and we couldn’t be more excited to finally release it. Maybe there was a bit of desperation writing and recording these songs.”

“Going through personal turmoil and watching [guitarist] Francesco [Artusato] deal with injuries, we knew this could change things drastically for us. The album was a welcome distraction, and we dumped every emotion we had into ‘You Will Be The Death Of Me’. To watch Fran heal and become an even more complete artist in front of my eyes has been amazing to watch. Everything we went through individually and together with this album drew Fran, Ryan, and I together. I couldn’t be more proud of this album knowing I made it with my family.”

“This record is special to me in a different way. From writing the music during one of the toughest times of my life while dealing with a bad injury due to a car accident to being obsessively involved with every aspect of its production, recording, and creating the artwork. It’s hard to describe how I feel, and to finally see this record getting ready to be released.”

“We are all very satisfied with how this record showcases the evolution of our band and our evolution as individuals. Without our brotherhood, this music could not have happened. Music is what kept us strong together during our toughest times. There’s nothing like art that expresses pure and deep emotions, and that’s what I feel when I listen to Howard’s performance on this record.”

“I think this album shows the growth the band has experienced after years on the road together, and a friendship that has continued to thrive doing what we love together.”

Notably, the group recorded the album at Sparrow Sound in Glendale, California with Whitechapel’s Alex Rudinger on drums. Artusato said the following about that:

“He’s incredible. He was exactly what we needed.”

Black Veil Brides have premiered a new video for their new song “Fields Of Bone.“ This track is from the band’s new concept album “The Phantom Tomorrow,“ which will be released on June 4. 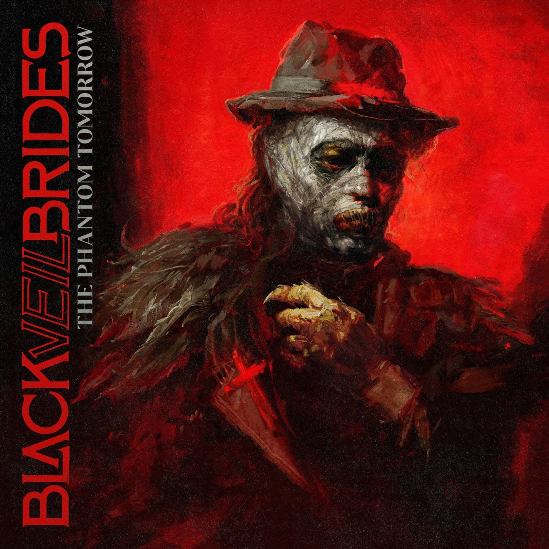 Crypta (ex-Nervosa, ex-Burning Witches, etc.) have premiered a new video for their new song “From The Ashes.” This track is from the band’s new album “Echoes Of The Soul,” which will be released on June 11.

“The song is basically about the well-known tale of the phoenix, but in a more philosophical sense. It talks about the ever-changing cycles of life, about the many endings and beginnings we have to go through, about how many old versions of ourselves need to figuratively die in order for us to keep growing and evolving as human beings, and finally, about building resilience to endure all these rebirths.”

“I believe the song perfectly matches the current moment we’re living, during which all humanity needs to reinvent itself and be reborn ‘From The Ashes’. The video clip preparation itself can also be translated through it: building up such a big production during this terrible moment we’re living was a big challenge to all of us. I believe, for all of that, from the creative and cinematographic perspective, we had a great final outcome for the videom” 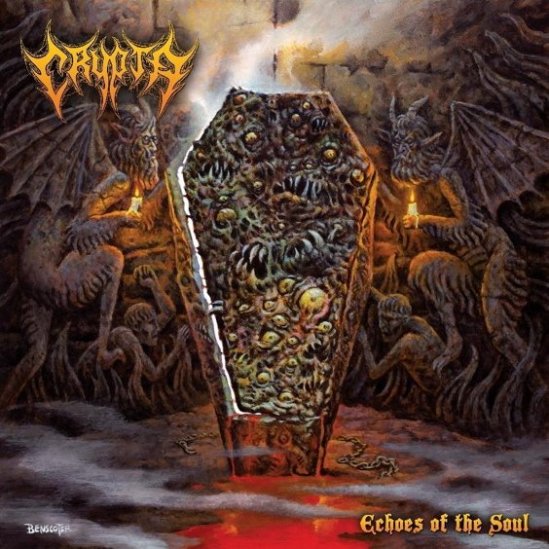 “Echoes Of The Soul” Track Listing:

Withered have announced that they will be releasing a new album titled “Verloren” on June 25. The cover art and track listing for that effort can be found below:

“Rafay [Nabeel, bassist] wanted to use the theme of ‘missing’, which was broad and abstract, so I dialed it down to be more about this outlook I’ve developed over the years about how each of us have a ‘Love Well.’ Every bit of love you get from your parents, your upbringing and your learning how to receive and experience love in relationships and through experiences contributes to the well. Your traumas counterbalance that and take away from it, especially when foundational core elements take a hit, like the untimely loss of a parent. That’s one of life’s unique puzzle pieces and when that piece is removed it’s never going to be replaced.

We’re equipped with a certain capacity – our wells are filled to a certain level – and when you start getting smacked with traumas, whatever you have in that well – your defense mechanisms – can get worn down pretty quickly, especially for someone who has never really known love because of a broken home, difficult relationships or whatever. Each one of us in Withered carry unique traumas that we’ve focused this new record on. For me, most of my significant losses are from older wounds that I’ve dealt with through Withered from the very beginning, but with this being the first album with Dan and Rafay, it’s like a new exercise for them to really focus on the things they’ve been carrying around.”

“About two years before I started Withered I went through a series of traumas where I was forced to take stock of and define my foundational ‘puzzle pieces’ that could be taken away and what the trauma and grief is going to look like when I lose close family and/or friends I truly care about. Ironically, one I didn’t face until recently was Withered. No one ever thought that not being able to play shows or tour because of a pandemic was even feasible.

I processed the idea of losing Withered and playing music and touring and everything else around the time of ‘Grief Relic‘ when two guys quit the band and I lost a lot of steam and inspiration. Luckily, Beau was there to kick my ass and shake me out of it. When it comes to this album, there was an initial suffering of anxiety because of the uncertainty in the world and the fear of losing this album because we put a lot into it, are super proud of it and it is the best Withered album yet. It’s important for my inspiration and motivation to go forward. It takes so much effort for us to create a record, the thought of it for it to all be for naught or potentially be wasted just destroys me.”

“We’re constantly looking for something new to do. We love genre bending and putting D-beats next to funereal riffs next to black metal blasts and heavy doom riffs and figuring out how to make it all work and make sense with whatever vibe we’re trying to nail down. For this one, I wanted to lean back into the funereal doom world. I got burnt out when doom – especially southern doom, being a southern band – was the word of the day around the time of our first two records.

We basically ran in the other direction and got away from doing any full-on doom parts for a while. I wanted to come back around to that, so we went back to bigger stuff like My Dying Bride for the couple of eight minute epics on the album [album opener ‘By Tooth In Tongue‘ and closer ‘From Ashen Shores‘]. Also, for the first time in my life and against my better judgment, I decided to write clean vocals and I’m singing on two songs.

They’re kind of buried in the mix a little bit because I’m still self-conscious about them, but they were the only things that made sense for the parts we wrote. I tried to fight it, but nothing extreme was accomplishing the goal. On top of that, we go the other way where three of the songs have some super crusty and grind elements.

Part of why I asked Dan to join the band was because I knew he would get the sludgy, crusty side of things and help me cultivate that better in WITHERED. On the album, ‘The Predation‘, ‘Dissolve‘ and ‘Casting in Wait‘ are his. Those would be the twists on this album because we’re always trying to write what we think is missing and what we want to hear in heavy music after sitting down and looking at the landscape of what’s out there.”

A video for the record’s first single, “By Tooth In Tongue,” can be found below:

Inhuman Condition, the band featuring Terry Butler (Obituary), Jeramie Kling (The Absence), and Taylor Nordberg (The Absence), have shared a teaser for their new song “Tyrantula.” The full track will appear on the band’s new album “Rat God,” which is set to be released on June 4 (vinyl out August 6). 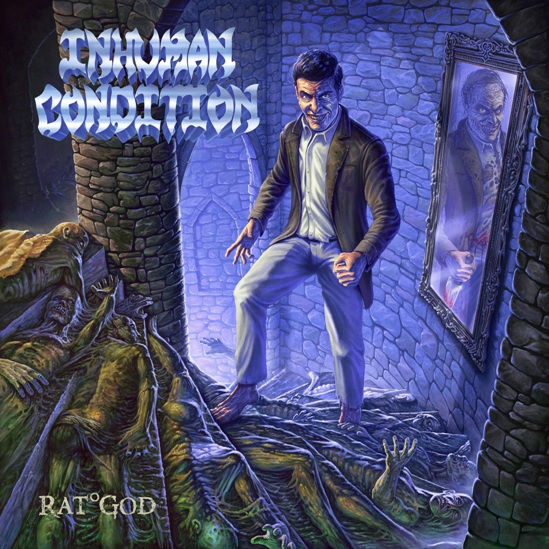 Trade Wind (Stick To Your Guns, Stray From The Path) have premiered a new video for their new song “DIE! DIE! DIE!.” This track is from the band’s new album “The Day We Got What We Deserved,” which will be released on May 21.

“…Put simply, ‘DIE! DIE! DIE!’ is about the choices being faced by every person who’s living through this current hellscape that we call ‘civilized society’. With the video we wanted to try and visualize how the capitalist system can’t be stopped without people coming together.

“The Day We Got What We Deserved” Track Listing: