On March 26, Machine Head’s Robb Flynn and Jared MacEachern performed “The Blackening” in full during a virtual “Electric Happy Hour” set. You can see footage of that below:

On March 19, Machine Head’s Robb Flynn and Jared MacEachern performed “The More Things Change…” in full during a virtual “Electric Happy Hour” set. You can see footage of that below:

“Me and Stix has been wanting to jam on something for awhile and finally had the opportunity on one of my favorite tunes from this era. Steel Panther took over the MH practice gear in Germany after our sets at the Rock Am Park Festival in 2012 and were slaying a bunch of Dokken covers. This had to be one we did. I had realized that Dave hadn’t guested on a CaJ yet so he was a no-brainer. Dave and I have the same mind-set as things go and he’s one of my favorites in the business. Always quick with the tracks and loves to get things done. Russell was the final piece and came through big. Such a huge talent and gave the song all the sprinkles. Paul Fig has been such a rad connection through all of this and beefed up our mix while Wayne Marsala is always on point with the vid edits. Thanks to George, Don, Mick and Jeff for creating such a ROKKEN tune and to all who had a part in bringing this cover to life.”

“I hope you enjoy watching this as much as we enjoyed making it. I would like to thank the homeys: @jayruston For taking time out of his busy schedule to do this sweet mix, @rarebirdlit for the studio, @dirtyern12 for making this rad video, and @ra_diaz for the company and my brothers in arms: @phildemmel @shavoodadjian @brandonpertzborn I love you guys so much and thank you for absolutely crushing this!! I hope we did @stpband justice ❤️👊🏻❤️”

Machine Head will be reissuing their 2007 album “The Blackening“ on limited edition picture disc vinyl and cassette. The effort, which was remastered for vinyl by Ted Jensen and Justin Shturtz, will include two bonus tracks that were recorded live during the band’s 2019 tour. Pre-orders are available HERE and they are expected to ship in April.

It looks like Machine Head have been working on new material. The band shared the below photo from the studio:

On January 15, Machine Head’s Robb Flynn and Jared MacEachern played a virtual “Electric Happy Hour” set. The performance included various Machine Head tracks as well as covers of Iron Maiden’s “Hallowed Be Thy Name,” Metallica’s “Master Of Puppets,” System Of A Down’s “Aerials,” and a snippet of Bryan Adams’ “Summer Of ’69.” You can watch the full show below:

Machine Head’s Robb Flynn has shared a new poem tilted “Vomitous Creatures And Cretins.” The piece was written following the treasonous pro-Trump insurrection at the United States Capitol, which occurred earlier this week. 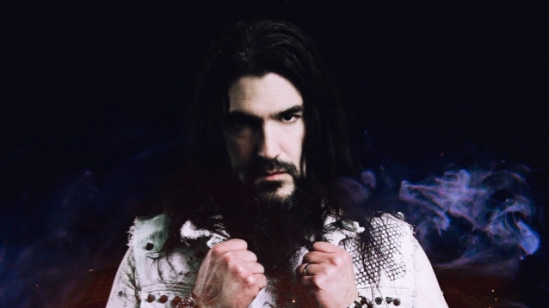 “Charlatans with no morals, have brought us these sorrows, and we have no one to blame⁠⠀
But ourselves we’ve allowed, what can only be now, called a moment of national shame⁠⠀
With confederate piousness, standing tall on the Dias, armed gunman plunder our Congress⁠⠀
When American flags, are replaced with Donald Trump flags, only now do they⁠⠀
see how we’ve regressed⁠⠀
⁠⠀
Fiery speeches, puked by lecherous leeches, the vomitous creatures and cretins⁠⠀
Conspiracies shouted, her truth has been routed, as liberty lays raped and beaten⁠⠀
And we would be fool, not to call this a coup, months in the making this game⁠⠀
Too little too late, did the tech giants wait, as the country went up into flame⁠⠀
⁠⠀
The police remained calm, as white men looted on, the Qanon’s who feigned so much disgust⁠⠀
At when Kaepernick kneeled, because black boys were killed, in silent protest⁠ to the unjust
They attacked freedom‘s property, then claimed that it ought to be, OK to kill black kids for the same⁠⠀
God forbid it was Target, that might make them a target, police trigger-fingers itching to tame⠀
⁠⠀
Black folks died for fake $20’s, for toy guns they lost plenty, 2020 our national reckoning⁠⠀
Now in 2021, the Maga’s have come, to the tune of Trump’s pied piper beckoning⁠⠀
And with nary a scratch, a few cans of teargas, to the terrorist attempting a coup⁠⠀
They looted with amnesty, to democracy’s travesty, oh to be white, in the red, WHITE, and blue”

Despite receiving some praise for the poem, it appears others have sadly decided to threaten Flynn over his frequent political posts. He said the following about that:

“Good times in my DM‘s today. Just a little taste. Listen to me… I have literally dealt with this for 30 years. Before it was in mail and hand written letters, then it was emails and message boards, now it’s DM’s and the comment section.
.
Just so we’re all crystal clear… I am not going anywhere.
.
I will not shut up.
.
If you don’t like the things that I have to say on my personal Instagram account, Unfollow. I’m not here to please you, or give you some watered down version of what you think somebody in metal band should be.
.
Don’t agree with my politics? Go ahead and Unfollow. Zero Fucks given. No one is forcing you to be here. You are free to speak your opinions here, as long as you are respectful and not spamming, and I keep a pretty long leash on what is “respectful”
.
“Shut up and stick to music”? I’ll do just that… By singing songs like a “nation on fire”, “Davidian”, “clenching the Fists of Dissent”, “ in comes the flood“ and “halo”.
.
And for those of you who did write this to me, consider this a warning. I purposefully left your names off of this post. This is the last time I will do that. Let there be no mistake, I will not hesitate to Dox you the fuck out.
.
I’ve been a public figure for most of my adult life, I’m used to people threatening me, I had over 1000 death threats after the “racism in metal“ video. I still get death threats at least twice a week. I accept it for what it is.
.
But the second people start threatening my wife and my kids, you’ve crossed the line, a line I will not ever accept.
.
Don’t believe me? FUCKING BRING IT!!”

As you are probably well aware of by now, pro-Trump rioters stormed the Capitol in Washington, D.C. earlier today (January 6) as lawmakers were counting the Electoral College votes to officially certify President-elect Joe Biden’s win. A number of rock/metal musicians have since taken to social media to comment on the insurrection, which was spurred by Trump himself. You can find some of the various reactions below:

These are TERRORISTS. This is armed insurrection. The flames were fanned today & over time by the president & specific senators who CANNOT be allowed now to distance from or denounce what they have directly caused. Know their names. THIS is the result of their deception. Shame. pic.twitter.com/nDJhvV3b1c

Tom Morello (Rage Against The Machine):

When BLM protestors were marching on the confederate monuments here in Richmond, they were getting beaten with batons & tear gassed.
These dudes are literally being allowed to CLIMB the Capitol building lol

Hey Siri….what’s the definition of “treason”?

hey Fuckhead @realDonaldTrump tell you covidiots to go home…its a wrap, ya'll lost, GTFOH!! and while you're at it YOU get the fuck outta here too before people get seriously hurt!

When fear & hate are encouraged to assimilate steadily into the cultural zeitgeist the is ultimate result. Absolutely heart breaking & embarrassing. I see nothing patriotic or decent in the support of this idiotic, dangerous & asinine behavior. We must find a way to unite & heal

Imagine if these people were black and doing this? Mike Pence had to be evacuated. Domestic terrorist just stormed the capital. Where is the teargas? where the rubber bullets? https://t.co/Sgti5eawW3

Rubber bullets? Tear gas? Or is that only for #BLM activists? https://t.co/DQdxQ33fPR

Where are the goddamn police or state troopers? If these were BLM or AntiFa, there’d be bodies blown to hell. And they wonder why we say FUCK 12!

Ok, the US Capital is in lockdown. Angry, Anarchist mob worse than what they say Antifa is. Lafayette Square was ruthlessly swept by authorities in an instant for a Bible photo op yet these people are able to swarm here?? Where is the military? The National Guard? #capital #coup pic.twitter.com/7DbEgVqhHT

In NYC during the summer, we saw footage of police bashing bicycles over peaceful protesters heads, ramming through a bunch with their cars, shoving @zayer_dounya for simply walking in their pathway. And this is being allowed to go on inside the Capital right now: https://t.co/eFOQjwa1MX

They’re putting one man above the country. That’s how “patriotic” these people actually are. They are traitors & should be held accountable for their actions. The fact that they are cultists & idiots is no excuse. https://t.co/XM4aNiTkah

Pow 💥 I told ya’ll shit was gonna get wild before this BS is over. https://t.co/ehxeq1LyG5

Just imagine for a second if BLM tried this BS.. Just sayin.

Shit is Wild…. I wonder if ANYBODY is even gonna go to jail.. smh.. https://t.co/1cAfpAPdRV

A US President started this rally and asked the attendees to March with him to Capitol Building and overturn the election he lost. #Treason https://t.co/SiZIkTXZTe

spare me that right of the people bullshit we all know that if it was a Black or Hispanic storming the capital breaking windows and destroying property it would be a bloody mess. Because these are Trump supporters and not of color police are doing nothing. https://t.co/qVbzMhNIFw

I do not encourage any violence or riots but because these people are not Black, Hispanic ,BLM or Antifa they are allowed to destroy the capital without any push back from law enforcement. If u don’t see the racism in that then u are complacent. https://t.co/NNBUJWuTOi

You know he’s watching and loving all this.He has so much control over his supporters, so much control that he can get them to believe his lies and storm & vandalize the capital building based on a conspiracy theory he tweets, and to take millions of your dollars in donations.

These “protestors” should break into a CVS and then maybe the national guard will show up.

Been looking forward to the people storming the Capitol, but I thought it would be to stop the lies and corruption, not support it.