Hollywood Undead have released a new version of “Heart Of A Champion” featuring Jacoby Shaddix (Papa Roach) and Spencer Charnas (Ice Nine Kills). You can find an official video for that below. This version of the track is from the band’s new album “New Empire, Vol. 2,” which will be released on December 4.

“‘Heart Of A Champion‘ is about digging in deep when things appear at their worst. Finding the strength to overcome any and all odds against you.”

“As soon as Johnny and Charlie and the boys floated the idea, we were in. The video shoot was like a reunion too – Last time we all saw each other we were blowing the doors off a show in Germany 7 months ago.”

“I’ve always been a fan of Hollywood Undead and when we toured together this past winter we hit it off immediately. It’s an honor to be part of such a strong song and having Jacoby on it as well is just the icing on the god damn cake.”

“Coming Home is about getting carried away in the tides of life, but knowing even through that solitude that the ones who love us are always waiting for us on the shore.”

Zero 9:36 has premiered an official video for the new remix of his song “The End.” This version of the track, which is titled “The End / Undead,” features Hollywood Undead.

Zero 9:36 has teamed up with Hollywood Undead for a new remix of his song “The End.” This version of the track is titled “The End / Undead” and a lyric video for it can be found below:

Hollywood Undead have premiered a new video for their latest single “Idol.” This track features Tech N9ne and it will appear on the band’s upcoming album “New Empire, Vol. 2.” Johnny 3 Tears commented:

“I think the video best represents the chaos and turmoil of the song itself. Organized and introspective. But something insidious always right below the surface.”

Hollywood Undead have premiered a new song titled “Idol.” This track features Tech N9ne and it will appear on the upcoming second volume of the band’s “New Empire” double album.

“Sadly, we had the last leg of our European co-headlining tour with Papa Roach cut short due to the COVID-19 pandemic, but this video encompasses the raw, infectious energy the fans brought every night. So we thought releasing a live video, especially right now, would be a cool way to highlight the experience to put an exclamation point on a great tour.”

The remaining dates on Papa Roach, Hollywood Undead, and Ice Nine Kills’ European tour have officially been cancelled due to the coronavirus pandemic. The bands were previously planning to reschedule the shows, but they were unable to do so.

Hollywood Undead have premiered a new video for their song “Nightmare.” This track is from the band’s latest album “New Empire, Vol. 1.” The group commented:

“Shot in quarantine. Nightmares are defined as dreams that bring out strong feelings of fear, terror, distress or anxiety. They feel more vivid or intense than a bad dream, and nightmares are often differentiated from dreams when they cause the sleeper to actually wake up and experience intense feelings upon waking.”

Hollywood Undead have cancelled their spring tour with Bad Wolves, From Ashes To New, and Fire From The Gods due to the coronavirus pandemic. The band commented:

“The shows on our Spring 2020 U.S. co-headline tour w/ Bad Wolves, with exception to Council Bluffs, IA being postponed to 9/19/20, must be cancelled out of an abundance of caution and in line with official guidelines. Refunds are available at the point of purchase. Be Safe, Stay Healthy, and thanks for your understanding. Hey Bad Wolves From Ashes to New and Fire From the Gods – Lets try it again some time?” 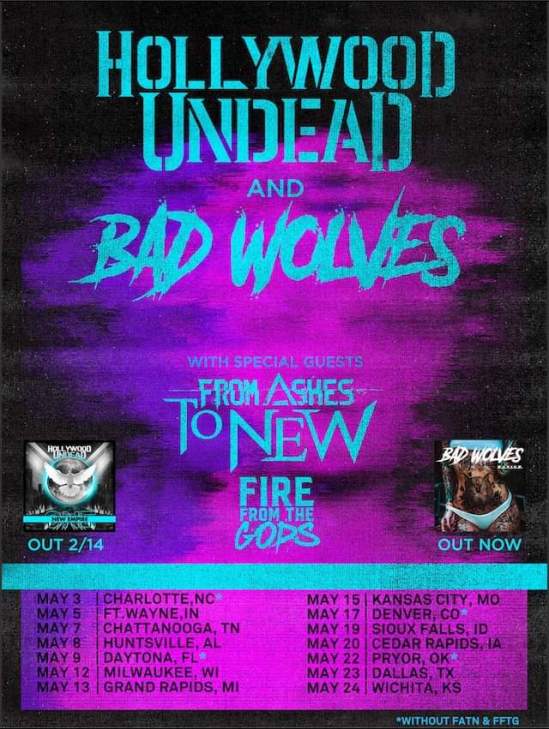