Killswitch Engage’s single “My Curse“ off their gold-certified 2006 album “As Daylight Dies“ has officially been certified gold and platinum by the RIAA. On top of that, the band’s cover of Dio‘s “Holy Diver“ and the title track of their 2004 album “The End Of Heartache” have both gone gold as well.

Killswitch Engage will be releasing a 20th anniversary vinyl pressing of their self-titled debut album on October 9. This version of the effort will feature expanded artwork and four bonus demo tracks. Pre-orders can be found HERE. 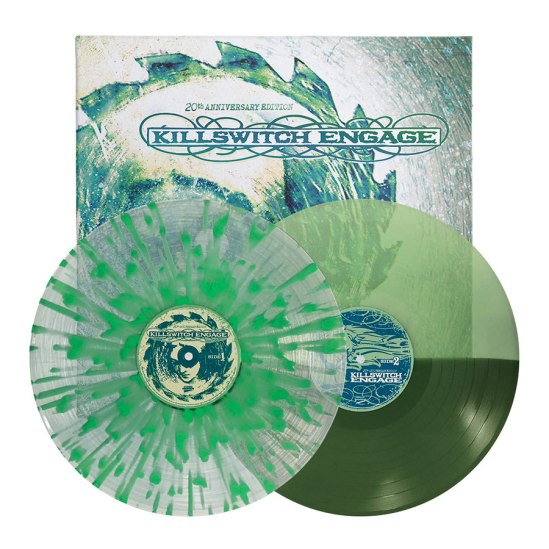 “I had a lot of fun taking this artwork apart and putting it back together. I especially had a good time searching through all the old photos and reminiscing. It was a simpler time in 2000 and the ‘hunger’ in the music still shines through to this day.”

“I wrote lyrics and did vocals for this album in a handful of days. From what I can I recall, it was raw, emotive, and filled with a certain cathartic power. This was us at our most primal and most stripped down stage. This was the beginning and still holds the core of what I believe to be the heart of what this band still is deep inside.

I am honored and privileged to be a part of this album. Before any big labels, world tours, and even the term ‘metalcore,’ it was just us four guys playing metal steeped in hardcore roots. We had no regard for a career, ambition, or any thought of longevity or legacy.”

Killswitch Engage will be releasing a new vinyl pressing of “As Daylight Dies” on December 18. This is the first time the album will be available on vinyl in the U.S. Pre-orders can be found HERE.

“It’s funny how, in 2006, there wasn’t even a thought about releasing this record on vinyl. And now, 14 years later, while we’re all stuck at home, it’s finally happening. ‘The End of Heartache‘ knocked down a lot of doors for us and set us up nicely for the release of ‘Daylight‘. While we were making this record, we never envisioned that people would still care about it so many years later. This re-release is for all the fans that have carried this band to places we never dared dream were possible. Thank you, KsE fans.”

“I’m wicked excited to have Daylight FINALLY come out on vinyl. This was such an important album in our career, and brings back a lot of great memories. I can’t believe it’s been 14 years since this album first came out… man, how time flies.”

Killswitch Engage are celebrating their 20th anniversary with a comprehensive timeline of significant moments from their career. You can find that HERE. With this news, the band have also released a new line of retro merch.

“I’ll never forget when we first started touring and I had to quit my day job to give it a go. I remember thinking, ‘Just try it for a year, that way you’ll have no regrets when it doesn’t work out, and you can go find a new job.’ 20-plus years later, here we are, and it’s been an amazing ride. I’m so grateful to our fans for letting us continue to do this…THANK YOU, KsE FANS EVERYWHERE!!!”

“It’s hard to believe KsE has been going for so long. We’re gettin’ old! We hope you all enjoy the photos, as they have definitely brought back a lot of memories for us! It seems like only yesterday we were playing VFW halls in Western Mass and rehearsing in my parents’ basement!”

“Looking back at what KsE has seen and done in 20 years is nothing short of mind-blowing to me. How a little band from Massachusetts could tour the world for this long is beyond me. A lifetime of exciting moments and amazing memories… I would not trade it for the world.”

As previously reported, Killswitch Engage, August Burns Red, and Light The Torch were forced to postpone their spring tour due to the coronavirus pandemic. Now, Killswitch Engage have offered an update on the trek saying that they are hoping to reschedule the dates for November/December.

We have an update on the North America Atonement tour. We’re currently targeting November & December for all of the rescheduled dates with the hopes that shows can happen in that time period. Both August Burns Red and Light The Torch would be available during this time as well, so it would be the same lineup.

That said, we want to be clear that nothing is set in stone yet. Once we are sure about the time period and we have all of the shows confirmed, we will be sure to make another announcement.

Your tickets will be honored for the postponed shows. For those who need a refund, they are now available at the point of purchase and will continue to be available through June 10. Also, when we eventually announce the rescheduled dates, you will be able to get a refund then as well.

Thanks so much for your continued patience and support. We can’t wait to see you all again.

Until then, please stay safe and take good care of yourselves.

Killswitch Engage have shared an acoustic quarantine performance of “We Carry On.” You can check that out below:

“This song is a deep one for me. When I wrote the lyrics, it was originally based off of struggles in a tumultuous, abusive relationship. Little did I know how significant it would eventually be as it has relevance during this strange time of quarantine and uncertainty. For me, it has turned into an anthem, of sorts, about perseverance.

While working on this version, it really struck me how much I felt the lyrics in a different light. As dark and difficult as things can get, we all have this inner power to persevere and pull through. I feel that the desperation and the melancholy of this song are balanced by a ray of hope that runs through it all.”

Killswitch Engage have surprise released a new EP titled “Atonement II B-Sides For Charity.“ The effort comes with six tracks including: “To The Great Beyond,” “Hollow Convictions,” “Killing Of Leviathan,” “No Devotion,” “I Feel Alive Again,” and “Prophets Of Treason.” Fans can purchase the effort on Bandcamp with 100% of the proceeds set to go towards the CDP COVID-19 Response Fund.

“These songs didn’t make the final cut for ‘Atonement‘. Choosing which songs make an album remains a tough process for me. While the songs that made the most sense appear on the album, I’m still attached to every song I write. So, when the idea came up to put these B-Sides out and donate funds to a charity, I was relieved at the idea and the band unanimously agreed to the cause. I am proud these songs get to see a release, and to help others in the process is a huge bonus.

These songs were written during a very difficult and uncertain time of my life. They are written with two perspectives: that of a struggling, angry, frustrated man having a crisis of faith, life, and love and a man finding the will and the strength to change perspective, try again, and to fight through it all.

Although these songs may not have made the cut for the album, they are deeply meaningful songs that I believe in whole heartedly. Lyrically, they are some of my favorites that I have written. From the very personal ‘Hollow Convictions,’ ‘No Devotion,’ and ‘I Feel Alive Again,’ to the battle cry songs of ‘Killing of Leviathan,’ ‘Prophets of Treason,’ and ‘The Great Beyond,’ it tells the story of my journey and my view of the world around me.

Big thanks to Metal Blade for partnering up with us on this! Also thank you to Center for Disaster Philanthropy for their amazing work! Lastly, thanks to all of you for purchasing the songs and contributing to helping those who are in desperate need during these uncertain times.”

Devils Head Productions have announced that they will be releasing a new soft vinyl toy based on Killswitch Engage’s Adam Dutkiewicz. The figure, which the company is calling “酔 獣” (aka “drunk beast”), will be released later this year.

As previously reported, Killswitch Engage postponed their tour with August Burns Red and Light The Torch due to the coronavirus pandemic, but they did manage to play a couple of shows before they were forced to stop. During those dates, ex-Killswitch Engage and current Light The Torch frontman Howard Jones joined his former band onstage for performances of “The End Of Heartache” and “The Signal Fire.” You can see footage of that from their March 10 show in Cleveland, Ohio below:

Killswitch Engage have postponed their North American tour with August Burns Red and Light The Torch due to the coronavirus pandemic. The shows will be rescheduled at a later date.

We have an unfortunate announcement to make, though we suspect most of you won’t be surprised. The rest of the dates on our current Atonement US headline tour with August Burns Red and Light The Torch have now officially been postponed. With all the bans being imposed on gatherings and all the health concerns involved, there was simply no way around it.

There’s nothing we enjoy more than playing for our fans, and if the first two shows of this tour were any indication, this was going to be one of the most fun tours we’ve ever had.

That said, these shows are not canceled, they are postponed. We definitely plan on coming back soon to play for all of you. For now, please hold onto your tickets. As soon as we have all of the rescheduled dates we will let you all know.

As always, thanks so much for your continued support. We couldn’t do this without you. We are grateful.

Please take care of yourselves.