During a recent interview with Meltdown of Detroit’s WRIF, Motionless In White’s Chris Motionless confirmed that the band have been writing music for their next album. The frontman also mentioned that they are hoping to release a new song late this year or early next year.

“A lot of the [other] guys are working on stuff by themselves. Like, I know Justin [Morrow, bass] and Ricky [Olson, rhythm guitar] are working on tracks for the band separately. I work separately, but then I also have friends that I like to work with that really do special stuff, unique things towards their own production that I like to work with.

For me, it’s always more fun and enjoyable to work with people that you get along with and connect with rather than just kind of sitting by yourself all the time. So I travel all over the country and just work with friends. I think music is a great way to bring people together, and especially right now where people need that. For my friends that do feel comfortable with not keeping me at a six-feet-apart distance and wanna work, then I’m gonna travel to them.

So we’ve got one song done so far since I’ve been [in Cleveland working with my friend John]. We have a bunch of songs in the bank from previous days, working with other people and each one of us separately. And we’re just gonna keep working until we have a ton of songs to pick from for the new record.”

He went on to say that the band like to write a lot of material before entering the studio:

“We wanna have the time to — as a band or individually — go over the music that we’re working on and bring that to a studio and feel like we’re not just sitting there wasting our time or having days just burn away in the studio of trial and error on just writing songs. I mean, it’s not cheap to travel out of your hometown. It costs a lot to live somewhere else where the studio is, never mind the studio cost itself. So it’s a financial decision as well as just a mental decision — to not just be burning yourself out day by day in the studio, trying to get stuff done within your deadline. We like to just work at our own pace, go into the studio and then kind of continue it from there.”

He also added the following after being asked if the coronavirus pandemic has inspired the new music:

“I realized how internally angry I am at missing the shows and the tours that we’re missing [because of the crisis], because everything I’m working on kind of has this really aggressive edge. I know our fans really enjoy our songs like ‘Another Life’ and the more laid-back or emotional tracks, which there will be those as well, but everything I’m doing myself lately has kind of been heavier. And I’m just, like, ‘Where is all this coming from?’ I know I’m a quietly, or somewhat quietly, angry person, but it’s really coming out in the stuff I’ve been working on. So we’ll see what happens. I know there’s gonna be a mix, like there always is.”

He continued after being asked about release plans:

“I think we’ll be trying to get at least a new song out by the end of the year, but I just hope nobody holds me to that. We’re just gonna keep writing, and what happens happens. It might be early next year. I don’t know.”

Motionless In White have released a Caleb Shomo (Beartooth) remix of their song “Another Life.” You can stream that below:

Motionless In White have officially cancelled their U.S. tour with Knocked Loose, Stick To Your Guns, and Ovtlier due to the coronavirus pandemic. The band are still planning to rebook the trek at some point, but they decided to cancel it for the time being so fans can get refunds.

Motionless In White said the following:

After processing the information our band and team have been receiving regarding the uncertain future of live events in the near future, as well as factoring in refund policies from various ticketing companies, we have decided to mark the Black & Blue Tour as “canceled” for the time being.

We fully plan to rebook the tour as early as we can once we start to see live events returning around the world. Though this is a tough decision, considering it “canceled” now allows you to collect refunds and that is what we feel is the best course of action.

We hope that everyone is staying healthy and sane right now. We are looking forward to finally getting back on the road to see you.”

Motionless In White have cancelled their European tour due to the coronavirus pandemic. The band are working with promoters to get back to Europe when it’s safe to do so.

As you may already know, many of the European festivals are being postponed or canceled due to COVID-19.

The health and safety of the fans will always come first, and in the meantime, we are working as fast as possible with all promoters to get you updates about our getting back to Europe.

Motionless In White have postponed their U.S. tour with Knocked Loose, Stick To Your Guns, and Ovtlier due to the coronavirus pandemic. The trek will be rescheduled later this year.

We regret to inform you that due to the escalation of the COVID-19 pandemic, we are forced to postpone our upcoming Black And Blue Tour to a different timeframe this year. New dates will be announced as soon as we receive the go-ahead from promoters.

We have been waiting as long as we could to see what our options were before making this call, but unfortunately, after talking with venues and promoters, we have no choice. As always, the forefront of our attention in this situation is based on the safety of both the bands and attending fans. As much as we are saddened by the news, we support the actions that are being taken around the world to try and prevent the spread of the virus.

As for the fans asking about our European and Australian tours in June and July, we unfortunately also found out today that Download has been canceled. We are now awaiting more information on the rest of the festivals and shows. If we can be there, we’ll be there. We will let you know as soon as we know in the coming weeks.

Lastly, we would just like to send a massive thank you to anyone out there that works under the essential business umbrella who are still out there working hard and have been dealing with the close contact risks associated with your job. We appreciate you!

Thank you. We’ll see you in the summer.

Motionless In White have announced a U.S. tour with Knocked Loose, Stick To Your Guns, and Ovtlier. You can find the dates for that run below. 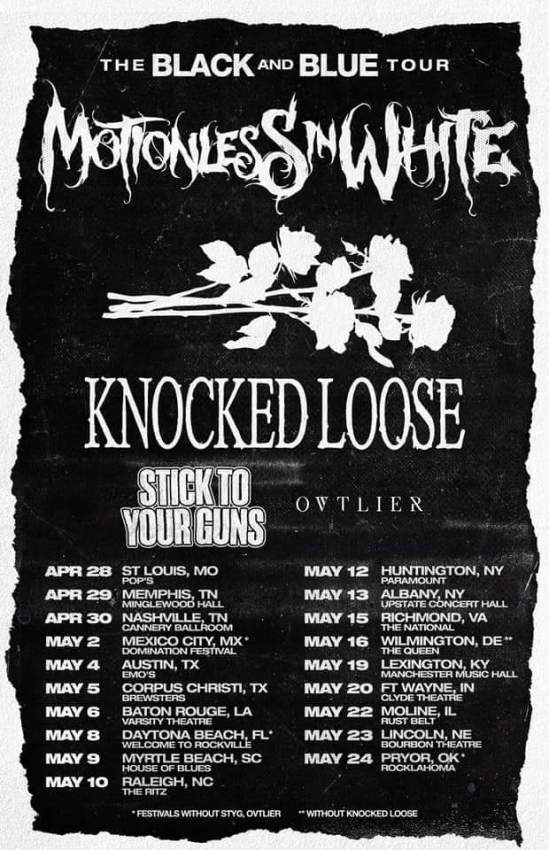 Motionless In White have announced a June European/UK tour. You can find the dates for that run below. 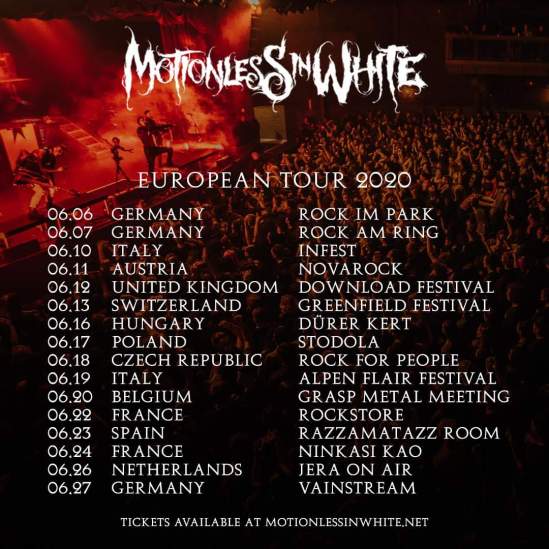