“I hope you enjoy watching this as much as we enjoyed making it. I would like to thank the homeys: @jayruston For taking time out of his busy schedule to do this sweet mix, @rarebirdlit for the studio, @dirtyern12 for making this rad video, and @ra_diaz for the company and my brothers in arms: @phildemmel @shavoodadjian @brandonpertzborn I love you guys so much and thank you for absolutely crushing this!! I hope we did @stpband justice ❤️👊🏻❤️”

Child Bite and Black Tusk have joined forces for a collaborative cover of Prong‘s “Snap Your Fingers, Snap Your Neck.” You can find a video for that track below:

“I can’t speak for Black Tusk but us Child Bite guys have been laying low for the past several months, focusing on other aspects of our lives as opposed to forcing band productivity when we honestly just weren’t feeling it, or even worse, cluttering up the social landscape when the world has had much more pressing matters to focus on than demented rock music…

Not that shit isn’t still flinging off of the proverbial fan here in the US, but when the ‘Tusk fellas hit us up about a lighthearted, low-stakes, long-distance collab, it sounded like just the right project to help us dip our toes back into being a band. And it was! Hopefully our take on this undeniable ’90s banger brings a smile to a few faces today.”

“I’ve been thinking of a way to entertain and help at the same time those that are isolated because of the quarantine while staying at home, and maybe suffering the loss of a friend or family member.

So I decided to call some friends. I explained them what this was all about, and they jumped in inmediately.

Even though I’ve never been in touch with some of them, like Andreas or Monte, they are players that I really admire and follow and I’m really happy that they decided to join anyway. The idea is to give people some entertainment during this global pandemic period, and the ‘synchronicity’ concept of the song, translated as unity between us (musicians), all based around the globe, could send out a message of hope to other people during these difficult times, and also encouraging them as well to help others.”

The 2020 Dimebash was held at The Observatory in Santa Ana, CA on January 16 and it included an all-star jam featuring members of Foo Fighters, Anthrax, Lamb Of God, Crowbar, Stone Sour, Testament, Act Of Defiance, Prong, Static-X, Vio-lence, Sepultura, and tons more. You can see some footage from the concert below: 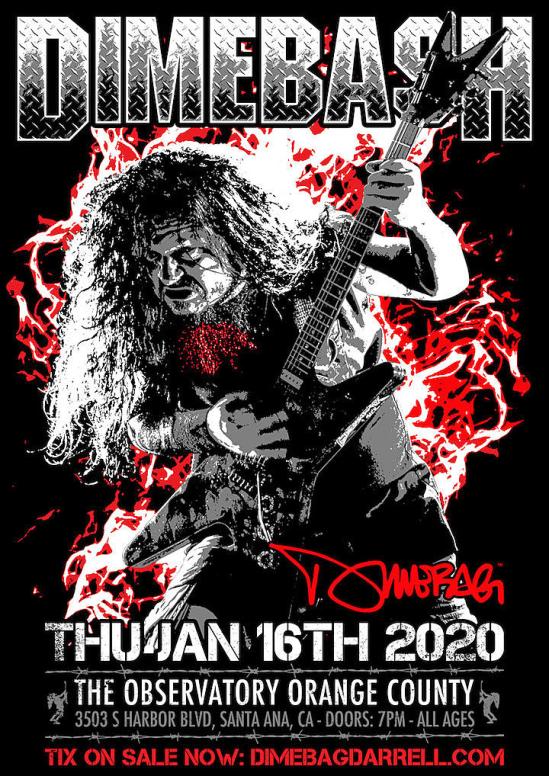 Unearth have announced a European/UK tour with Prong and Dust Bolt. You can find the dates for that run below. 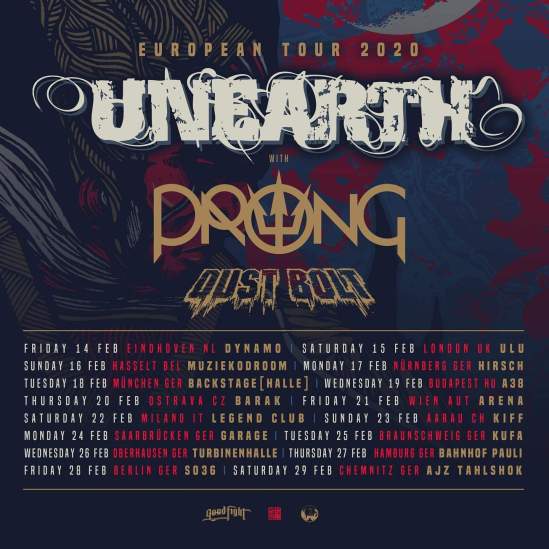 Prong have premiered a new song titled “End Of Sanity.” This track is from the band’s new EP “Age Of Defiance,” which will be released on November 29. Frontman Tommy Victor commented:

“‘End Of Sanity’ is a thrash/hardcore/crossover number in typical Prong style which I wrote especially for our American tour with Agnostic Front. If you’re into Prong, you’ll love this track.”

Prong have officially revealed the details for their new EP “Age Of Defiance.” That effort will be released on November 29 and it will feature two new songs and three live tracks that were recorded during an April 2015 show at Huxley’s Neue Welt in Berlin, Germany. 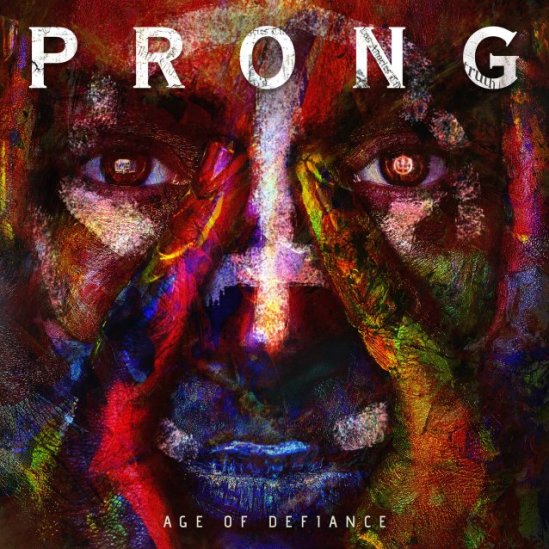 Tommy Victor had the following to say about the new songs:

“[It’s] a thrash/hardcore/crossover number in typical Prong style which I wrote especially for our American tour with Agnostic Front. If you’re into Prong, you’ll love this track.”

Pre-orders can be found HERE and the first single “End Of Sanity” is expected to be released on October 25.

Prong have premiered a new video for their song “Blood Out Of Stone.” This track appears on the band’s latest album “Zero Days.” As previously reported, the group are also planning to release a new EP titled “Age Of Defiance” on November 29.

Prong will be releasing a new EP titled “Age Of Defiance” on November 29. The effort will feature five tracks, including two new songs, the title track and “The End Of Sanity,“ as well as live versions of “Rude Awakening,“ “Cu-Rate,” and “Another Wordly Device.” The first single, “The End Of Sanity,” is expected to surface on October 26. 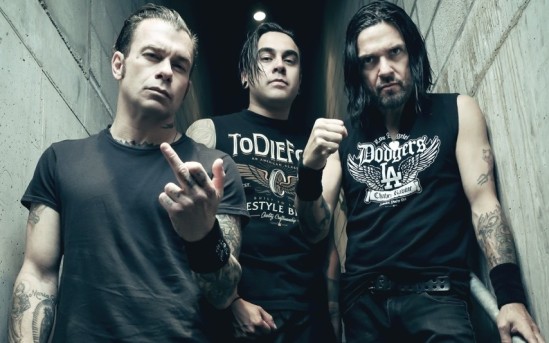 Victor told Loud TV the following about his decision to only release two new songs:

“I don’t wanna sound negative too much, but for the most part, no one gave a fuck. You make all these records, these new records, and essentially people wanna hear ‘Snap Your Fingers, Snap Your Neck’. And I liked doing those records, but I got burnt out of these long albums. So I wrote a bunch of songs, but I’m just gonna pick two out of that and put those out. Why put out a whole another album full of material and people don’t even listen to the shit — they don’t listen to the whole record. So this thing may do really well. It’s, like, ‘Two PRONG songs. Cool. I don’t wanna listen to any more than that anyhow.’ And then we have a live ‘Rude Awakening’, ‘Cut-Rate’ and ‘Another Worldly Device’ on it. So we’ll see how it works out. But it’s been fun so far for me, because I haven’t been overworked with it.”

“Making ‘Zero Days’ was — that was a major project, that album. There wasn’t a lot of time to make it, and it was a lot of work. I was working seven days a week, sleeping four hours, trying to come up with lyrics. I think the lyrics are great on the record, because I was figuring out what the hell was going on with the song and trying to do the lyrics and making everything so perfect. And I get a little disillusioned because nobody cares. Of all the lyrics I wrote, maybe a couple of people were, like, ‘What was the topic of that? What were you saying with that? That’s an interesting lyric.’ I’ve had very few conversations about it. And it wasn’t released right — the record label didn’t do a great job with it — so I was very disappointed with the whole outcome of that. So now it’s two songs, [three] live [tracks], and then a full-length album later.”

He also added the following about the lyrical themes of the new songs:

“‘Age Of Defiance’ is [about how] people feel like they’ve gotta be rebels, and that’s nothing new to that. You have to find a way to find your own peace and to be calm and not violent. It’s really an anti-violence song. People say, ‘Oh, ‘Age Of Defiance’, it sounds like it’s a rebel, a revolution song,’ but it’s just the opposite — it’s sort of, like, ‘I don’t even care. I wanna be happy myself.’ And ‘The End Of Sanity’ is the other one. It’s kind of self-explanatory. I just feel like the world is going crazy. The shit that people say and the whole thing doesn’t make any sense anymore to me.”

“I watch the news and everything. You have better news in Europe. But you don’t get a big, broad picture of America neither. You get CNN, and that’s one view of everything. But in America, there’s one view and then there’s another view and the other thing, and they’re all just advertisements for each side. It’s bullshit. It’s not news. So you don’t really get any news anymore. They’re TV shows.”