Incubus have cancelled their May/June dates in the U.S., UK, and Europe due to the coronavirus pandemic. The band were hoping to reschedule, but they were unable to do so.

“To our friends in the US, UK and Europe, we regret to announce that our May and June dates are officially being cancelled. As much as we were holding out hope that we could get these dates rescheduled and see you guys in the near future, this is unfortunately the best course of action at this time.

Refunds will be available at the point of purchase from your authorized retailer and we apologize for any disappointment this brings. We look forward to bringing our show to you as soon as it’s safe to do so and in the meantime, make sure to take care of yourself and others. Much love ❤️ INCUBUS“

This news comes after the band’s summer tour with 311 and Badflower was recently cancelled.

Incubus’ Brandon Boyd has shared a couple of new covers including his takes on Jemaine Clement‘s “Goodbye Moonmen” from “Rick And Morty” and Beach House‘s “Myth.“ You can check those out below:

Incubus have cancelled their North American tour with 311 and Badflower due to the coronavirus pandemic. The band issued the following statement:

“We regret to announce that our 2020 US Summer Tour w/ 311 and Badflower is officially being cancelled. As much as we want to see everyone this Summer, we need to put the safety of our fans, crew and venue staff, first. Ticket holders will be emailed directly with their refund options and if you’d like more info, make sure to visit www.livenation.com/refund or contact your original point of purchase. We love you all, stay safe out there and we’ll see you as soon as we can get back on the road! ❤️” 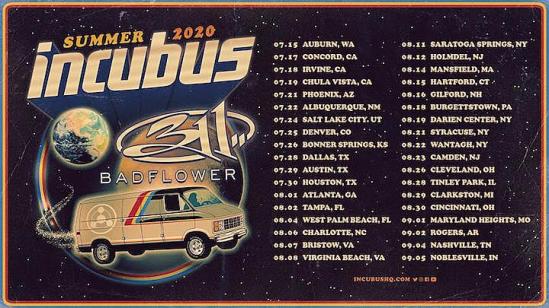 During a recent interview with Spin, Incubus were asked if they have any plans to celebrate the 20th anniversary of “Morning View” in 2021. Brandon Boyd responded by saying it “would be so much fun” to commemorate the milestone with an anniversary tour.

“That would be so much fun to do a ‘Morning View‘ reunion tour. I think we did it once, didn’t we? At that La Brea arts space? Didn’t we do ‘Morning View‘ all the way through that one time? [The group murmurs “yes.”]

What was awesome for me about ‘Make Yourself‘ and playing it through 40-something times … There were so many things that were cool about it, but not the least of which is that it was fun every single night to play that album from front to back. And we have other albums we’ve written that aren’t as much fun to play from front to back.

There are certain songs, like, “Ugh, God, here we go with this one.” It’s pretty great that we made something 20-plus years ago that’s still enjoyable to perform. And then obviously I think it goes without saying that it’s pretty amazing to take that experience to so many different places and have the audience be just as happy about hearing a record that’s 20-plus years old and being really stoked to have that experience with us. It can’t be overstated enough. It was a really, really special thing…”

On another note, Mike Einziger also commented on the uncertainty of the band’s summer tour with 311 and Badflower:

“We haven’t announced anything or formally changed anything yet at this point. Because there are many factors and just elements to the situation that are very far beyond our control.

Our most important North Star is really safety, so if there’s any issue of safety — which there seems to be — that that’s going to take priority for us. But yeah, there are many moving parts. We’re kind of in a holding pattern to see what’s gonna happen, but we’ll make the decision that best suits us and our fans and the world. We definitely don’t want to pose any type of danger to people.”

Incubus have postponed their European/UK tour due to the coronavirus pandemic The band are hoping to reschedule next year.

“Prioritizing everyone’s health & safety and following government advice with the ongoing situation regarding Covid-19, our European tour is officially postponed. We are working on new dates for 2021 and as soon as we have more info we’ll let you know.

Please hold onto your tickets as they will remain valid for the rescheduled dates and we look forward to bringing our show to you next year. Stay safe and healthy, everyone.

Incubus have shared footage of themselves performing “Our Love” while in quarantine. That track is from the band’s latest EP “Trust Fall (Side B).“

Incubus have postponed their May tour due to the coronavirus pandemic. The band commented: