Night Verses have announced a West Coast tour with Dead American and Auras. Here’s the dates:

Night Verses have premiered a new video for their song “Vice Wave,“ via Loudwire. This track is from the band’s latest album, “From The Gallery Of Sleep.“

“This was one of the last songs written for the record. It started with Nick’s intro lead and ended up in a direction none of us expected. I think the big turning point in the writing process was when Nick added those massive fuzz/noise ring outs in the bridge. Once those were in place, the rest of the song quickly started to gravitate in that direction. Side note: The digital percussion sounds were influenced by all the Ministry, Arca and Post-era Bjork I was listening to at the time.”

“As far as the video, we are all pretty big on making our own artwork and teaming up with our friends to get exactly what we have in mind. We worked with Chris Abouabdo on this and built around some of the imagery we put together for the vinyl booklet. He’s amazing at bringing life to our initial visual ideas and developing scenes that feel very immersive while simultaneously complimenting the initial score, to the point where it almost starts to feel like the music and visuals were inspired by the video instead of the other way around. We love what he did on this and aim to continue working with him in the future.”

Night Verses are streaming their new album “From The Gallery Of Sleep“ in full, via Noisey. That effort will officially be released on June 29.

Night Verses have premiered a new song titled “Infinity Beach,“ via MetalSucks. This track is from the band’s new album, “From The Gallery Of Sleep,“ which will be released on June 29.

“This song was initially a huge stretch beyond what we are normally comfortable writing. We’ve had some influences lingering from the past few records that had slight effects on our music, but never really surfaced as clearly as they do on this track.

From Portishead to Pink Floyd to Massive Attack to Opeth, we did our best to pay homage to our less predictable influences without losing sight of who we are.”

Night Verses have premiered a new song titled “Phoenix IV: Levitation,“ via Revolver. This track is from the band’s new album, “From The Gallery Of Sleep,“ which will be released on June 29. Drummer Aric Improta (also of The Fever 333) commented:

“Even though it’s a pretty on-the-nose analogy, we always use the ‘Phoenix‘ songs on each album as an attempt to raise the bar for ourselves musically. We usually try and include all of our favorite ideas and most challenging passages in that one song. It also acts a personal time capsule, reminding us of what our peak level of musicality was during that cycle.” 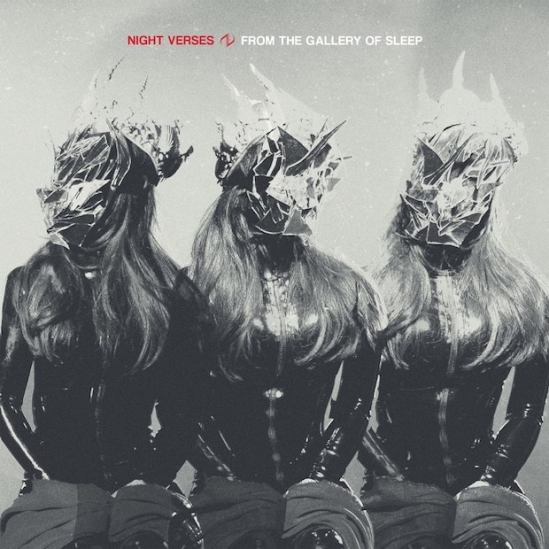 “From The Gallery Of Sleep” Track Listing:

Night Verses have surprise released a new EP titled “Copper Wasp.” The effort, which was produced by Will Putney, can be streamed below, and purchased at bandcamp.com.

Night Verses have posted some footage from the their new album sessions. This will be the band’s first effort as an instrumental trio, following the departure of vocalist Douglas Robinson.

Night Verses have parted ways with vocalist Douglas Robinson. With him gone, the band will now continue as an instrumental three-piece.

“As of today, we (Aric, Nick, Reilly) will be continuing Night Verses as an instrumental trio. We came to this decision mutually with Douglas and believe it is the best thing for us all moving forward. We’d like to take this time to not only thank Douglas for his commitment and contributions to the band for the past 5+ years, but to also acknowledge how important he was to the foundation of the band. We’ve played hundreds of shows around the world together, and made art that we’ll be proud of forever.

Thank you to our team and everyone at Equal Vision / Graphic Nature records for the continued support, and most of all, thank you for staying interested and taking the time to read this.

We’ll be entering the studio this month with Will Putney to record our 3rd full length album.

Here’s some of the new material we’ve been working on. We’ll be posting a few more of these writing clips before the release.
–Night Verses“