Former Stormtroopers Of Death bandmates Charlie Benante (Anthrax), Scott Ian (Anthrax), and Dan Lilker (Nuclear Assault, ex-Anthrax) have teamed up with Mike Patton (Faith No More, etc.) for a quarantine performance of “Speak English Or Die,” which has been retitled “Speak Spanish Or Die.” You can check that out below:

NECA were previously planning to release an 8″ clothed action figure based on Stormtroopers Of Death’s “Sgt. D.” in December 2019, but it ended up getting delayed. The toy will now be released on April 27.

S.O.D.'s very own Sgt D 8" Clothed Action Figure will be shipping out to retailers on April 27th. Here are the final packaging photos!

Former Stormtroopers Of Death bandmates Charlie Benante (Anthrax), Scott Ian (Anthrax), and Dan Lilker (Nuclear Assault, ex-Anthrax) recently reunited to perform “March Of The S.O.D.“ while quarantining in separate locations. You can see footage of that below:

Scott Ian is selling handwritten lyrics from Anthrax and Stormtroopers Of Death on his official website. The guitarist said the following about that:

“Choose any Anthrax or S.O.D. song and I will personalize or dedicate them to anyone you want. The lyrics will come with a signed certificate of authenticity and a stage-played guitar pick.” 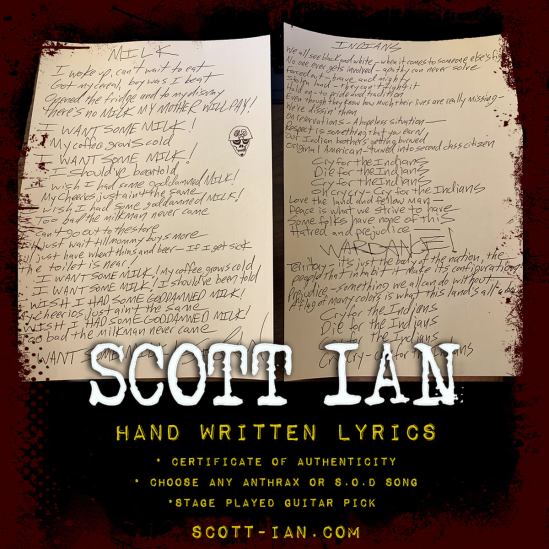 NECA have announced that will be releasing an 8″ clothed action figure based on Stormtroopers Of Death’s “Sgt. D.” The toy will be available in December and some photos of it can be seen below:

During an appearance on the Let There Be Talk podcast, Scott Ian (Anthrax) was asked if he would ever do Stormtroopers Of Death again. He responded with the following:

He added that he has not spoke to Billy Milano in years, but he’s “got no issue with [him] at all.”

Lamb Of God have announced that they will be releasing a new 20th anniversary covers album under their Burn The Priest moniker on May 18. The effort is called “Legion: XX“ and it will feature tracks from artists that inspired them. You can find a video for their cover of The Accused’s “Inherit The Earth”, along with the cover art and track listing below. You can also pre-order the release HERE.

A bonus cover of Helmet’s “In The Meantime” will also be available on a 7” vinyl version of “Inherit the Earth.”

Mark Morton commented on the release:

“To truly understand the essence of the band Burn The Priest, one must first consider the landscape in which it began: the mid-’90s. Grunge and alternative music ruled the airwaves. Social media and the internet had yet to assume their role as our collective sources for entertainment and cultural exchange. It was a time when DIY ‘zines turned us on to new bands and regional scenes, and ‘copy and paste’ still implied a print shop and a glue stick.”

“As our sound and songs developed, so did our goals… we began playing basement parties and warehouse shows and in doing so, we realized that the energy we were creating was transferable. The shows we played in those squats and warehouses [in Philadelphia] and the people we met there are forever embedded in our collective consciousness and the DNA of our band.”

“Our inauspicious beginnings somehow grew into something none of us had ever even imagined possible, let alone aspired to, however, this is the story of Burn The Priest. The songs we chose to cover on this album reflect that story. They are touchstones from that point in time. The inspiration we gleaned from these bands and these songs carries through our work and our creative pursuits, even to this day. Many thanks to these bands for lighting our fire and endless gratitude to our fans around the world for keeping it lit.”

Randy Blythe also had the following to say about the “Inherit The Earth Cover”:

“I’ve been an Accused fan since I was 14 when they were on the ‘Thrasher Skate Rock Volume 3’ compilation with C.O.C. and all these amazing crossover bands. Their singer Blaine Cook was a huge influence on me, vocally.”

“‘Inherit The Earth’ hit me in the face soon after I managed to get my grubby mitts on the album sometime around ’88. I got The Accused record at a Yellow Banana record store on Route 1 south of DC while in route back from my ‘counselor’ to my home in Woodbridge, Virginia. I got home and grabbed my board and I rocked it on my Discman. At about 2:12 into the tune the clouds parted above me and on a loudspeaker, God bellowed down to me, ‘RECEIVE YOUR PURPOSE.’ That was the moment I knew that if I tried hard enough, I could convey myself and how I felt — with music. It will never be ‘ours,’ and we know that about all the tunes we’ve covered, but hopefully one of them hit you in the face as I had been, and God will part the clouds for you, too.”

“I have a radio show on Gimmie Radio, and [the station] is all metal shows except for mine. I do the punk rock show because I want to show the direct correlation between my band, and the punk scene going back to The MC5 and The Stooges. There is a direct link — look at old pictures of Metallica, Slayer and Anthrax, and they’re wearing Misfits, D.R.I., and C.O.C. t-shirts. They fused the technicality of metal with the intensity of punk rock. Before them, metal was like in slow motion. Speed metal bands were listening to Discharge. I beat that drum all the time when I talk to kids.”

During their January 19 show in Atlanta, GA, Lamb Of God performed Stormtroopers Of Death’s “United Forces,” along with Anthrax’s Scott Ian, and Charlie Benante (who were both in S.O.D.), and members of Deafheaven, and Power Trip. Check out some footage of that below:

The full list of special releases for this year’s Black Friday Record Store Day (November 27) has been posted. You can see the list of rock/metal releases below, and can view the full list at recordstoreday.com.