Lacuna Coil, Sunn O))), Third Eye Blind, and more will be taking part in this year’s “Ten Bands One Cause” initiative. All the participating artists will be releasing limited edition pink vinyl to benefit Gilda’s Club NYC.

Light The Torch, The Interrupters, Ded, Dead Girls Academy and Tetrarch have all been added to the 2019 Epicenter Festival. The event, which is replacing Carolina Rebellion, will take place at the Rockingham Festival Grounds in Richmond County, North Carolina on May 10-12 and the updated daily lineups can be found below.

In other news, organizers have also announced that Eddie Trunk, Don Jamieson, and Jim Florentine of “That Metal Show” will be reuniting at the festival. They said the following:

“The rants, the debates, the rock star interviews and yes…Stump The Trunk are back! May 10 and 11, the 3 amigos of That Metal Show will be live onstage at the country’s biggest rock festival–EPICENTER–and we couldn’t be more stoked. The Boys Are Back In Town!”

The lineup has been revealed for the 2019 Epicenter Festival. The event, which is replacing Carolina Rebellion, will take place at the Rockingham Festival Grounds in Richmond County, North Carolina on May 10-12 and tickets will go on sale December 14 at 12:00 PM EST / 09:00 AM PST. Here’s the daily lineups:

The lineup has been revealed for the 2019 Welcome To Rockville festival. The event will take place at Metropolitan Park in Jacksonville, FL on May 3-5 and the daily lineups can be seen below:

May 5: Tool, Incubus, Bring Me The Horizon, Papa Roach, The Struts, Meshuggah, Architects, Fever 333, Reignwolf, The Glorious Sons, Dorothy, While She Sleeps, Yungblud, Grandson, Shvpes, The Dirty Nil, and Hyde.

The lineup has been revealed for the inaugural Sonic Temple Art + Music Festival. The event, which is replacing the annual Rock On The Range festival, will be held on May 17-19 at the MAPFRE Stadium in Columbus, OH and Foo Fighters, System Of A Down, and Disturbed will headline.

“I am so proud of what we accomplished with ‘Rock On The Range‘, and with the debut of ‘Sonic Temple Art + Music Festival‘, we’re excited to bring our devoted rock fans and the city of Columbus a one-of-a-kind, world-class event that expands on the festival experience. The idea behind ‘Sonic Temple‘ is walking into something bigger than yourself, where YOU belong, or where you were always meant to be. The crowd is unparalleled, and the energy is electrifying, like going to a place of worship. We want this festival to be a temple of rock n’ roll. We want this to be the ultimate rock experience for the true fans who love the genre as much as we do.”

Tickets will go on sale at noon EST on November 30. 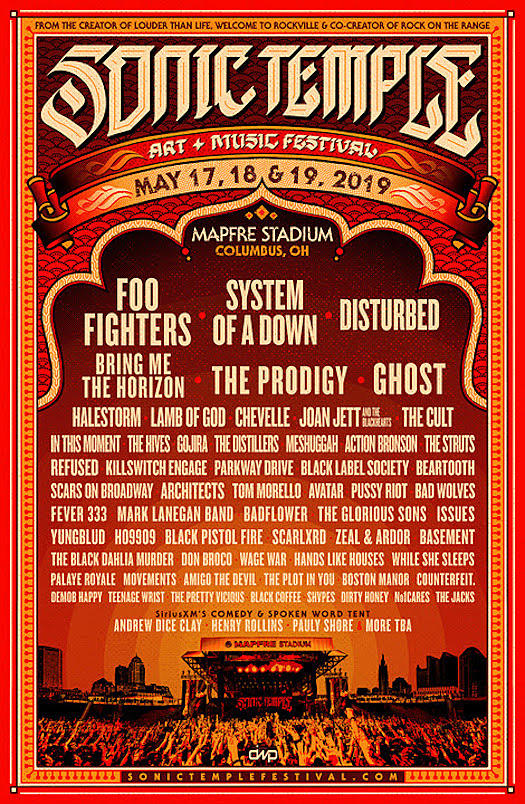