The 2020 Bonnaroo Music & Arts Festival in Manchester, TN has officially been cancelled due to the coronavirus pandemic. That event was supposed to feature Tool, Primus, Tenacious D, Oysterhead, King Gizzard And The Lizard Wizard, Uncle Acid And The Deadbeats, Flogging Molly, The Struts, etc.

“Bonnaroo Music & Arts Festival will not take place this September 24-27, 2020 as originally rescheduled. Our annual time together on the Farm is nothing short of magical, but out of an abundance of caution and for the health and safety of all Bonnaroovians, artists, staff, partners and our community, this is a necessary reality.

Bonnaroo will return to the Farm on June 17-20, 2021 to celebrate our 20th Anniversary. More information on lineup, camping and accommodations will be available at a later date. All current ticket holders will receive an email shortly with information on how to roll your ticket over to the 2021 festival, or receive a refund.

While we can’t be together on the Farm this year, we’re going to bring the Farm to you! Keep September 24-27, 2020 on your calendars for a very special virtual Bonnaroo weekend including some of our favorite moments from past and present, along with some special surprises. Details will be coming soon.

Radiate positivity and take care of each other,

The 2020 Bonnaroo Music & Arts Festival has been postponed due to the coronavirus pandemic. The event, which was set to feature Tool, Primus, Tenacious D, Oysterhead, King Gizzard And The Lizard Wizard, Uncle Acid And The Deadbeats, Flogging Molly, The Struts, etc., will now take place in Manchester, TN on September 24-27.

“Bonnaroo Music & Arts Festival will be rescheduled to take place September 24-27, 2020 out of an abundance of caution and for the health and safety of all Bonnaroovians, artists, staff and our community.

All current tickets and onsite accommodations (camping, tent rentals, RV, etc.) will be honored for the new weekend. Fans with off-site accommodations and shuttles purchased through the festival will be contacted directly with updates.

Rest assured, we will share updates as quickly as possible via email, our website, and on our social accounts.

Please continue to radiate positivity through this uncharted time in our world. Thank you for your continued support and we look forward to seeing you on The Farm this fall.

Tenacious D will be hitting the road on a fall U.S. tour. The duo have partnered with 46 for 46 for the trek, which will find them performing and encouraging voter registration in swing states.

“[Trump is] the most divisive, corrupt and dangerous President in the modern history of this country, and we simply cannot stand for another four years of his administration! Now is the time to elect a REAL leader!

As previously reported, Rush’s Neil Peart has sadly passed away following a battle with brain cancer. A number of rock/metal musicians have since taken to social media to pay tribute to the legendary drummer and some of the various posts can be found below:

Rest in peace, my brother. 💔

Thank you Neil. Thank you for inspiring me and for all your help and advice along the way, especially in the early days when you took the time to talk to a young green Danish drummer about recording, gear and the possibilities that lay ahead… Thank you for what you did for drummers all over the world with your passion, your approach, your principles and your unwavering commitment to the instrument! Rest In Peace.

Absolutely Horrible News. Neal Peart has died after fighting brain cancer for years. His later life was filled with so much family tragedy. So, so sad. I’m just shocked. pic.twitter.com/EM4Ea1quaY

My prayers and condolences to the Peart Family, Fans and Friends. Neil was a kind soul. R.I.P……. Rush Drummer Neil Peart Dead at 67 – Rolling Stone https://t.co/icYz6fnXfE

Just read that Neil Peart has passed away. RIP, we have lost a legend never to be replaced , not just as a drummer but one of the greatest lyricist ever. Time to put on 2112 and listen to the mastery that he gave us all. 💔

This is so incredibly sad. Neil, Geddy & Alex changed my life as a young, aspiring bassist. Neil was the top of the list for rock drummers to me and so many in my generation. Condolences to the family and @rush organization. #rush #neilpeart https://www.rollingstone.com/music/music-news/neil-peart-rush-obituary-936221/

The greatest of all time. RIP Neil Peart. I’m going to go raise a glass and then air-drum the shit out of Tom Sawyer.

I am completely heartbroken and crying about this #neilpeart my true Hero, I can’t believe this . My heart goes out to geddy and Alex and to all the @rush fans everywhere! 😢

RIP Neil Peart.. this is too sad for words…. Thank you for your greatness Neil…#NeilPeart #Rush #rip

It is unbelievably sad to hear that my favorite drummer of all time, Neil Peart, has left us. Very hard to find words to properly express the level of inspiration & influence he had on so so many musicians. He will forever remain at the top of my list. Farewell to a true king. pic.twitter.com/A9QkSWg2f9

Tom Morello (Rage Against The Machine):

John Dolmayan (System Of A Down):

It is with a heavy heart we say goodbye to an innovator both percussively and lyrically. The world will be a sadder place without him, may he be at peace and rejoin his wife and daughter in the next adventure . Neil , you’ll live forever in our hearts and through the music so dear to so many of us your fans.

Thank you Neil for all of the amazing music you gave us. You were truly a inspiration for not only EVERY drummer, but for every musician… I will be listening to Rush all day today in your honor. RIP Neil Peart… #rush #drumlegend #heartbreaking

It absolutely breaks my heart to pieces to get the news of the passing of one of my greatest heroes of all time. #RIPNeilPeart My deepest condolences to the band, crew & family. Rest In Peace my friend. You will always be my hero 😓
For further thoughts: https://t.co/kg0StEx0EB pic.twitter.com/KnmalW5PLD

I’m deeply shocked and saddened by the news of one of my favorite drummers of all time has passed away today. Thank you for everything Neil Peart. You Will be sorely missed and never forgotten. My deepest condolences to family and friends all over the world. RIP ❤️#rush #neilpeart #theprofessor

‪The Sin and the Sentence would have been an entirely different album without his inspiration and influence on my drumming. Rest In Peace Neil Peart. ‬A true legend.

Such a loss, one of my favorite musicians of all time. His influence and music will live on through anyone who picks up an instrument #neilpeart

A Farewell To Kings…. #RIPNeilPeart A true Canadian and rock n roll hero!! Thanks Neil for your stories and your dedication to your craft. You taught me a lot about life and history and hopefully someday I will still own a Red Barchetta, which was my dream when I was 13….because of you. 😢 “Why are we here? Because we’re here. ROLL THE BONES.”

So sad to hear of the passing of the great Neil Peart of Rush. A revolutionary drummer and lyricist. I had the honor to work with him on The Burnin For Buddy sessions in NYC in the 90s , He was so inspiring and supportive of me , I was so nervous being in the room with him, but he was so comfortable to be around and was all about self-expression, no two drummers are alike he said to me and that made me feel at ease to be myself. A lesson I carried on with me to this day. A sweet caring man with depth of character besides his obvious talent as one of the greatest drummers of all time. #ripneilpeart

Devastated to learn of the passing of one of Canada‘s biggest musical icons, Neil Peart. You were the best of the best, top of your field. You made Canadians proud 🇨🇦. Thank you for musical contribution 🙏🏻 #crushed #fuckcancer #NeilPeart #Rush @5fdpcanada

Neil Peart Is single-handedly the reason I became a musician back in 1978 after hearing “all the worlds a stage” @rushtheband has been my favorite band since, so to hear that Neil passed away today is absolutely devastating to me. I’m sad beyond words……………… pic.twitter.com/PPcjzJNyXB

So much love and respect for Neil Peart. From his incredible playing, to his wonderful lyrics, for all the personal loss he had overcome, for being embarrassed by the trappings of fame, for his wit and humility and being a part of one of the greatest bands ever. Thank you so much. ✌🏼❤️🙏🏼

I owe a lot to this man, and I’ll always be grateful for his massive inspiration. A legendary drummer, and legends never die.

….”no his mind is not for rent … to any god or government…..” 1 of 2 most influential drummers of all time left the earth today ….. And all of Rock n Roll sighed …. RIP Neil ….. My steering wheel doesn’t stand a chance tonight

At the end of a crazy @rockhall night in 2013 where @rushtheband & @PublicEnemyFTP were inducted. It was just myself & Neil PEart alone talkin & laughing low in relief the long night was over-a small table backstage sharing a unique moment without much word. Rest in Beats my man

Dan Briggs (Between The Buried And Me):

😔😔😔
Thank you for the dedication to your craft. You pushed boundaries and made myself and music in general better because of it. #neilpeart https://t.co/auUJkojR4O

Rest In Peace Neil Peart. So sad to hear.

The master will be missed – Neil Peart RIP #RushForever pic.twitter.com/o4Y6chFiB3

The lineup has been revealed for the 2020 Bonnaroo Music & Arts Festival. The event will take place at Great Stage Park in Manchester, TN on June 11-14 and it will feature: Tool, Primus, Tenacious D, Oysterhead, King Gizzard And The Lizard Wizard, Uncle Acid And The Deadbeats, Flogging Molly, The Struts, The Marcus King Band, The Regrettes, Vampire Weekend, Run The Jewels, and more.

The full list of special releases for this year’s Black Friday Record Store Day event (November 29) has been posted. You can find a list of various rock/metal releases below. The full list can also be viewed HERE.

The lineup has been revealed for the 2019 Lollapalooza festival. The event will be held on August 1-4 at Grant Park in Chicago, IL and a number of rock acts have been booked including: Bring Me The Horizon, Slash Feat. Myles Kennedy And The Conspirators, Chevelle, Tenacious D, The Strokes, and Perry Farrell’s Kind Heaven Orchestra. The full lineup, which also features acts like Ariana Grande, Twenty One Pilots, Childish Gambino, etc., can be found in the below poster: 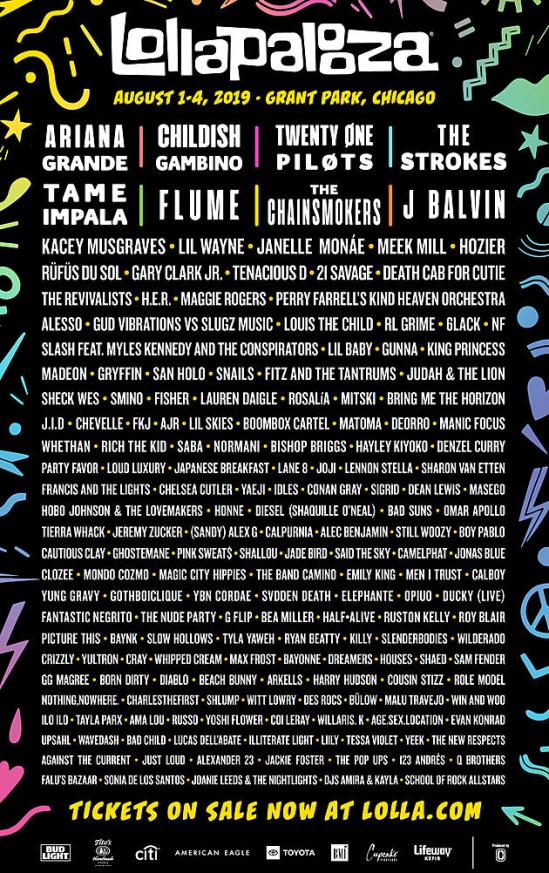 Tenacious D have announced some summer shows with Wynchester. The band will be touring in support of their latest album “Post-Apocalypto.” Here’s the dates: