In the wake of the tragic school shooting at the Marjory Stoneman Douglas High School in Parkland, FL, Monster Energy Fort Rock festival producers Danny Wimmer Presents (DWP) and AEG Presents, along with Corey Taylor (Slipknot, Stone Sour), Halestorm, and other artists performing at Fort Rock are speaking out and trying to bring attention to the “Students Fighting Guns Since Adults Won’t” campaign. People that sign the “Students Fighting Guns Since Adults Won’t” petition will get 50 percent off general admission weekend tickets. That petition was made by high school student Julia Kemple from Kalamazoo, MI, and it has already been signed by over 200,000 people.

“I’m absolutely behind this movement. Not only the name itself, but the reason and the cause. As a father, my one concern is my children. The fact that no one is doing anything worthwhile to change the horrendous laws and circumstances around these shootings is unacceptable. So if the adults can’t extricate themselves from the politics that are keeping them from ACTUALLY making a difference, I support the generation who will.”

“To all the students that have been affected by gun violence, and to students everywhere, YOU are the ones we’ve been waiting for. Our future is what YOU make it and the path is yours to blaze. YOU are the fire! We are proud to stand by you as we push to make this planet a better place. Love, Lzzy, Arejay, Joe and Josh of Halestorm.”

DWP CEO Danny Hayes was inspired by the kids taking a stand and said that “We should all be ashamed that our nation’s youth feels unprotected by those in charge.” He continued:

“As a Broward County, Florida native, the Stoneman Douglas tragedy really hit home for me. We are so deeply touched and moved by the courage and fortitude of the students at Stoneman Douglas High School. They have turned trauma into strength. As a society we must act quickly to give them the protection they deserve. Like the Woodstock generation that used music festivals to amplify their voice, these kids should be an inspiration to us all. It is incumbent on those with access to the microphone to ensure that their message is heard and acted upon.”

Michael Lang, co-producer/co-creator of Woodstock and a longtime DWP friend commented as well:

“I am so inspired by the students of Parkland and others around the country for speaking up and not allowing the same old NRA political rhetoric and lack of action to dampen their commitment. It is this kind of long-term determination and engagement that leads to real movement. It gives me great hope for the future of our country,​ to know that there is this generation of young people ready to take up the fight for positive change,​ much as my generation did in the ‘60s. ​I can only hope that with our support this movement will continue to grow and take up the reins not only on sensible gun control, but on the many issues that will affect their lives and the lives of everyone on the planet.​”

If you want to support the campaign you can sign the petition HERE. To get the discounted tickets, take a screenshot of your signed petition and forward your confirmation email to dh@dwpresents.com. The offer will be available through April 1, while supplies last.

The lineup has been announced for the 2018 Monster Energy Fort Rock festival. The event will take place at Markham Park in Sunrise, FL and you can see the daily lineups below:

The dates have been revealed for the “World’s Loudest Month” festivals. Stay tuned for the lineup announcements.

Rock On The Range: May 18-20 in Columbus, OH at MAPFRE Stadium (Lineup announcement coming November 27).

The lineup for the 2017 Monster Energy Fort Rock Festival has been revealed. That event will be held at JetBlue Park in Fort Myers, FL, on April 29-30, and will feature: Def Leppard, Chevelle, Papa Roach, Alter Bridge, Seether, Three Days Grace, In This Moment, Motionless In White, Nothing More, Beartooth, Cover Your Tracks, Soundgarden, A Perfect Circle, The Offspring, Mastodon, Highly Suspect, The Pretty Reckless, In Flames, Eagles Of Death Metal, All That Remains, Starset, I Prevail, Dinosaur Pile-Up, and Goodbye June. 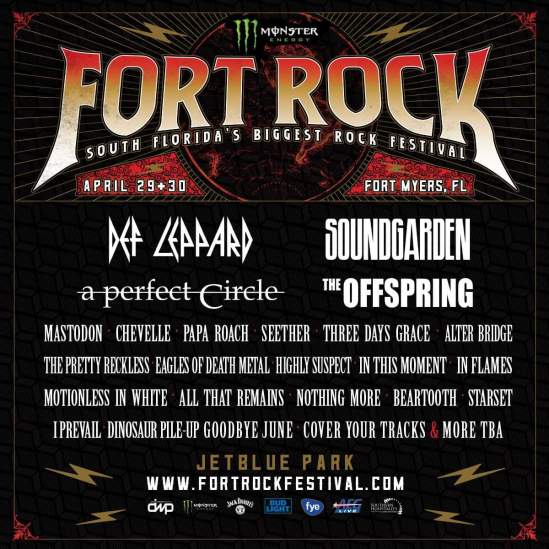 The lineup for the 2016 Monster Energy Fort Rock Festival has been revealed. That event will be held at JetBlue Park in Fort Myers, FL, on April 30-May 1, and will feature: Rob Zombie, Five Finger Death Punch, A Day To Remember, Megadeth, Lamb Of God, Anthrax, Sevendust, Ghost, Issues, Saint Asonia, Avatar, The Glorious Sons, Disturbed, Shinedown, Bring Me The Horizon, 3 Doors Down, Sixx:A.M., Pennywise, Bullet For My Valentine, Pop Evil, Asking Alexandria, Trivium, and Red Sun Rising.

The lineup for the 2015 Fort Rock Festival has been revealed. The festival will take place at JetBlue Park in Fort Myers, Florida on April 25, and will feature Slipknot, Godsmack, Breaking Benjamin, In This Moment, Motionless In White, The Pretty Reckless, Papa Roach, Starset, We Are Harlot, Young Guns and Islander.