AC/DC’s Brian Johnson has announced that his autobiography “The Lives Of Brian” will be released on October 26. Pre-orders can be found HERE.

Here’s description of the book:

“Brian Johnson’s memoir from growing up in a small town to starting his own band to ultimately replacing Bon Scott, the lead singer of one of the world biggest rock acts, AC/DC. They would record their first album together, the iconic Back in Black, which would become the biggest selling rock album of all time.

Brian Johnson was born to a steelworker and WWII veteran father and an Italian mother, growing up in New Castle Upon Tyne, England, a working-class town. He was musically inclined and sang with the church choir. By the early ’70s he performed with the glam rock band Geordie, and they had a couple hits, but it was tough going. So tough that by 1976, they disbanded and Brian turned to a blue-collar life.

Then 1980 changed everything. Bon Scott, the lead singer and lyricist of the Australian rock band AC/DC died at 33. The band auditioned singers, among them Johnson, whom Scott himself had seen perform and raved about. Within days, Johnson was in a studio with the band, working with founding members Angus and Malcolm Young, Cliff Williams, and Phil Rudd, along with producer Mutt Lange.

When the album, Back in Black, was released in July—a mere three months after Johnson had joined the band—it exploded, going on to sell 50 million copies worldwide, and triggering a years-long worldwide tour. It has been declared “the biggest selling hard rock album ever made” and “the best-selling heavy-metal album in history.”

The band toured the world for a full year to support the album, changing the face of rock music—and Brian Johnson’s life—forever.”

I’ve had some long nights and some great nights, bad days and a lot of good ones. I’ve gone from choirboy to rock 'n' roll singer, and now I’ve gone and written a bloody book about it… The Lives of Brian is coming October 26th: https://t.co/39bW2wkR1h pic.twitter.com/aOlxfQYTa6

Footage of Brian Johnson performing with his pre-AC/DC band Geordie has been shared on the Brian Johnson TV YouTube channel. The clips feature performances of “Goodbye Love,” “All Because Of You,” and “Blue Suede Shoes” / “Long Tall Sally” (feat. Fogg).

Back in 2016, Brian Johnson was forced to leave AC/DC due to hearing issues. However, thanks to a specialist, the frontman has since been able to return to the band.

“It was pretty serious. I couldn’t hear the tone of the guitars at all. It was a horrible kind of deafness. I was literally getting by on muscle memory and mouth shapes. I was starting to really feel bad about the performances in front of the boys, in front of the audience. It was crippling. There’s nothing worse than standing there and not being sure… The docs said, ‘Deaf is deaf, son.’ Cliff [Williams] and Angus [Young] didn’t want to be responsible for me damaging my ears any further. … Shit happens. At least it wasn’t terminal.”

He also added the following about the specialist who helped him:

“The first time he came down he brought this thing that looked like a car battery. I went, ‘What in the hell is that?’ He said, ‘We’re going to miniaturize it.’ It took two and a half years. He came down once a month. We’d sit there and it was boring as shit with all these wires and computer screens and noises. But it was well worth it. The only thing I can tell you is that it uses the bone structure in the skull as a receiver. That’s as much as I can tell you.”

AC/DC have officially confirmed their reunited lineup. As the rumors suggested, the group currently features frontman Brian Johnson, guitarist Angus Young, drummer Phil Rudd, bassist Cliff Williams, and guitarist Stevie Young. This news comes as the band have been sharing teasers for what is believed to be a new album titled “Power Up.” 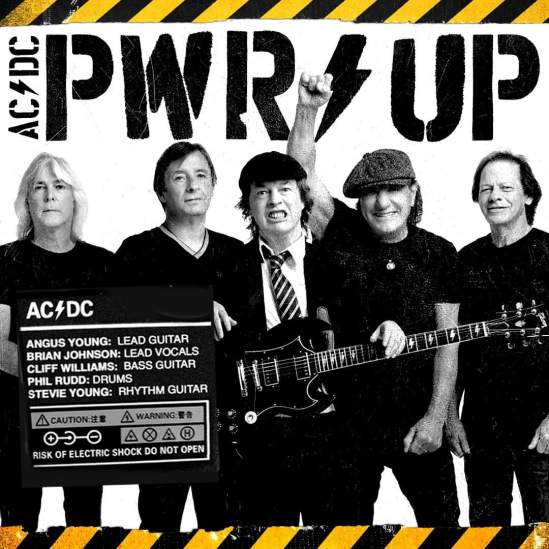 Dave Grohl (Foo Fighters) and Brian Johnson (AC/DC) will be discussing their careers together in a new documentary titled “Brian Johnson Meets Dave Grohl.” U.K’s Sky Arts will be airing the film on September 17. Here’s a synopsis:

For over a year, rumors of AC/DC releasing a new album featuring late guitarist Malcolm Young have been circulating online. Now, Behemoth’s Nergal and Twisted Sister’s Dee Snider have both added fuel to the fire by claiming that the band’s surviving members are planning to release new music containing material that Young recorded before his death.

“I know there’s a new AC/DC album in the making with Malcolm Young. It’s coming. It’s going to be an outtake from Rock or Bust. What do I expect? I expect nothing more and nothing less, just give me fucking rhythm and Angus and Malcom’s guitar. Don’t give me anything extra. [Brian Johnson] is back in the band.”

Snider also commented on Twitter, while responding to a fan who asked if a member of AC/DC is sick:

“He died. RIP Malcolm Young. But all four surviving members have reunited WITH tracks recorded by Malcolm while he was still alive. Malcolm’s nephew Stevie Young is replacing him (he’s done this a couple of times before). It’s as close as you can get to the original band.”

Rumors of a new AC/DC album have been heating up ever since photos leaked of Brian Johnson, Phil Rudd, Angus Young, and Stevie Young at Vancouver’s Warehouse Studio last year. Johnson also added fuel to the fire after reportedly telling Terrorizer that the rumors were true. After that, another photo surfaced suggesting that Cliff Williams may be involved in the album, despite his retirement. More recently, the band’s longtime engineer Mike Fraser confirmed that the band have “been in the studio doing something.”

AC/DC frontman Brian Johnson’s “A Life On The Road” series will be making its U.S. debut on AXS TV. The network has acquired two seasons of the show, which will debut on September 15 at 8 p.m. ET / 5 p.m. PT.

Joe Walsh (Eagles) recently said that he was working on new music with Brian Johnson (AC/DC), but the musician has now clarified his statement saying the two are not making an album together. He went on to say that they were just “having a bit of fun.”

To set the record straight – "THERE IS NO RECORD IN THE WORKS BETWEEN BRIAN AND I" We were simply having a bit of fun together, we are musicians afterall! pic.twitter.com/pHk8b6xqvS

It looks like Brian Johnson (AC/DC) and Joe Walsh (Eagles) have been working on some new music together. Walsh confirmed the news in the below Instagram post. It is unknown what the sessions were for, but many are assuming that the two were recording a studio version of the impromptu song they made during an episode of Johnson’s “A Life On The Road” series.

Great day making music with my old pal Brian today in london.  We nailed it!  Love ya man!

In Episode 5 Season 2 of Brian Johnson’s A Life On The Road @BrianJohnson meets @JoeWalsh in the back of a limo.
Joe brings his guitar along so Brian writes a song. 🙌🏻
A bit of tweaking and this could be a potential @acdc song. pic.twitter.com/GFOksvlkg7

Rumors of a new AC/DC album have been heating up ever since photos leaked of various members of the group at Vancouver’s Warehouse Studio. Some reports have even said the effort will feature the late Malcolm Young on every song. Now, Terrorizer are claiming that Brian Johnson has told them that a new album is coming and that he “sick of denying it.”

“Last night we played the final show of the TERRORIZER – “Caustic Attack Over Europe” Tour 2019. The last week we have had some great shows. Leiden (NL) was a killer sold out show and Saturday night was a cool fest in Drachten (NL) with our buds in Memorium from the UK. Want to say thanks to the bands Skeletal Remains and De Profundis. All great guys… Can’t say enough good things about both bands!!!

Of course thanks to the crew Darek, Kuba, Max, Jacek and of course the sound man Oscar!!!! Many thanks to Massive Music for another great tour!! Thanks to our management Gunter Ford and Alex Ford at World Entertainment for all their efforts!!

We ran into Brian Johnson from ACDC at the airport today after the flight home and we asked him about the rumors of him being on the new ACDC album and he said “Yes” and that he is ” Sick of denying it”. So that was a cool surprise ending to the tour.

South America is next!!!”