“Due to logistical issues impacting the production of the festival, Posty Fest is rescheduling to 2022. Refunds available at point of purchase. We can’t wait to make 2022 our biggest year yet. Stay safe everyone, we’ll see you soon.” 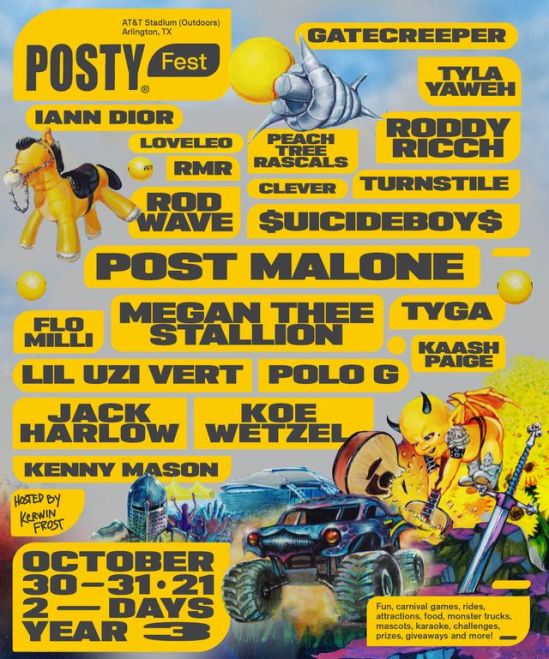 Turnstile and Gatecreeper are among the artists set to join Post Malone at the upcoming “Posty Fest.” That event will be held on October 30-31 at the AT&T Stadium in Arlington, TX and it will also feature: Megan Thee Stallion, $uicideboy$, Lil Uzi Vert, Tyga, and more.

Post Malone has premiered a new video for his new song “Motley Crew.“ The clip, which features NASCAR drivers Denny Hamlin and Bubba Wallace along with Tommy Lee (Mötley Crüe), Big Sean, French Montana, Ty Dolla $ign, Tyga and more, can be found below. The track was recorded as part of a companion project for an upcoming documentary.

The lineup has been revealed for the 2021 Lollapalooza festival. The event will take place on July 29 – August 1 at Grant Park in Chicago, IL and it will feature a number of rock acts like Foo Fighters, Journey, Limp Bizkit, All Time Low, Angels & Airwaves, and Jimmy Eat World, as well as rap and pop artists like Post Malone, Tyler, The Creator, and Miley Cyrus. The full lineup can be found in the below poster: 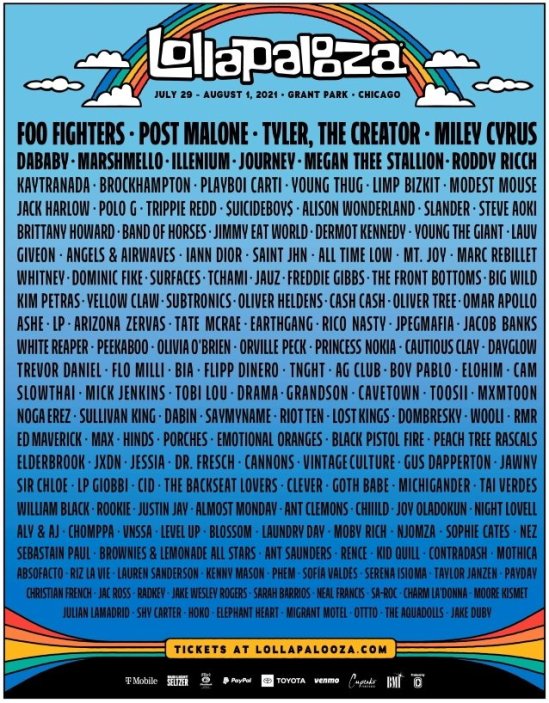 Ozzy Osbourne has premiered an animated video for his song “It’s A Raid.” The track, which features Post Malone, appears on Osbourne’s latest album “Ordinary Man.”

During his performance for the “Bud Light Seltzer Sessions Presents: New Years Eve 2021” livestream event, Post Malone performed covers of Alice in Chains’ “Rooster” and Black Sabbath’s “War Pigs” with drummer Chad Smith (Red Hot Chili Peppers), producer/guitarist Andrew Watt, and bassist Chris Chaney (Jane’s Addiction). The group were also joined onstage by guitarist Slash (Guns N’ Roses) during “War Pigs.” You can see footage of all that at the 2:11:11 mark in the below video:

The following statement was posted on tompetty.com:

“For the first time ever, the Petty estate is working alongside fans and engaging with the music community to celebrate and pay tribute to Tom Petty. In 2017, the first annual Tom Petty Birthday Bash debuted in Tom’s hometown of Gainesville, FL. Fans gathered for the free, six-hour show of all Petty tunes, performed in the legendary musician’s honor. The celebration has grown into a fully-fledged music festival featuring local as well as national acts, with fans traveling across the country to celebrate the life and legacy of Tom Petty.

Due to the ongoing pandemic, this year’s special Tom Petty Birthday Bash, honoring what would have been his 70th birthday (today), will be held virtually on Friday, October 23 with 5 hours of performances, testimonials and tributes to Tom from friends and fans including Stevie Nicks, Chris Stapleton, Post Malone, Foo Fighters, The Killers, Norah Jones, The Raconteurs, Jason Isbell, a very special performance by Mike Campbell and Benmont Tench and many more.” 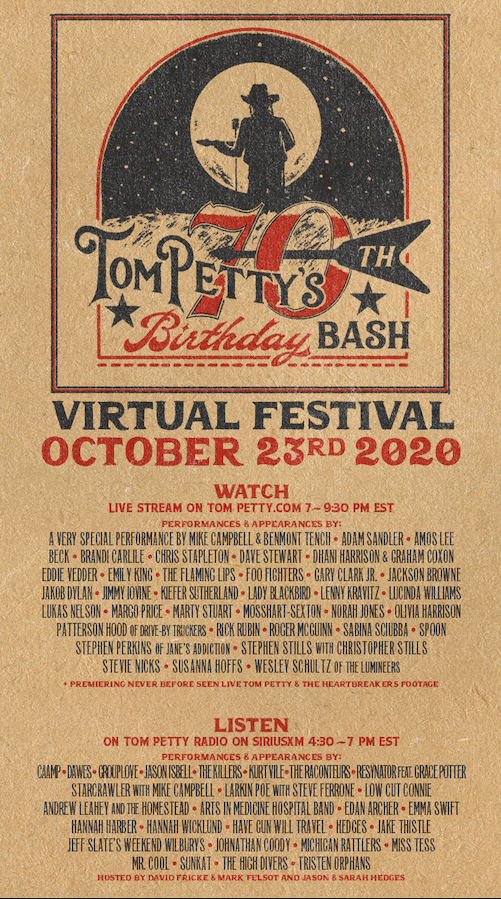 Rapper and noted metalhead Post Malone recently joined YouTuber Jared Dines, Dragged Under’s Tony Cappocchi, and rapper Tyla Yaweh for a metal jam session. You can see footage of that below. In addition to playing several metal tracks, the group also performed a cover of Wild Cherry’s “Play That Funky Music” and more.

Jamming with @postmalone and @tylayaweh

“Play that funky music” with @postmalone and @prettygoodtony

During a recent appearance on “The Joe Rogan Experience,” Post Malone, who is a noted metalhead, gave Nekrogoblikon a shout out. You can see footage of that below. However, it’s worth noting that the rapper mistakenly said that John Goblikon is the singer for the band.

Thanks for the shoutout @PostMalone @joerogan! pic.twitter.com/xpwmDPWlW3