Slipknot have announced that they will be livestreaming their November 5 “Knotfest” set at Bank Of California Stadium in Los Angeles, CA. The broadcast will also include select songs from Killswitch Engage, Fever 333, Code Orange, and Vended, along with a special performance from Cherry Bombs. Tickets for the stream are available HERE. 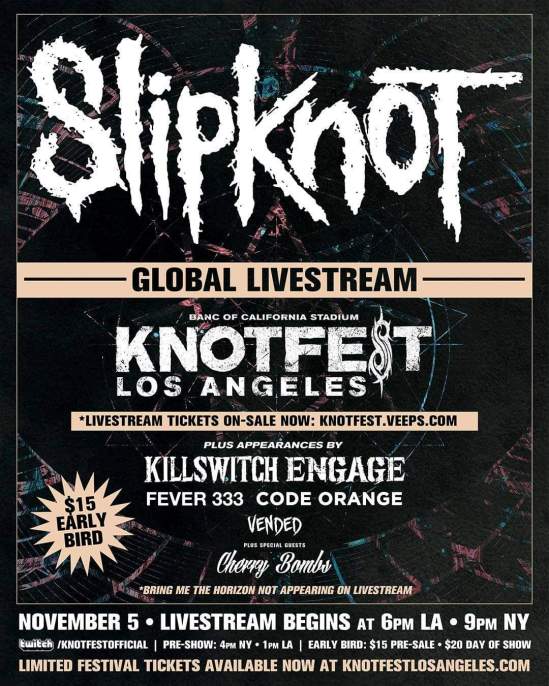 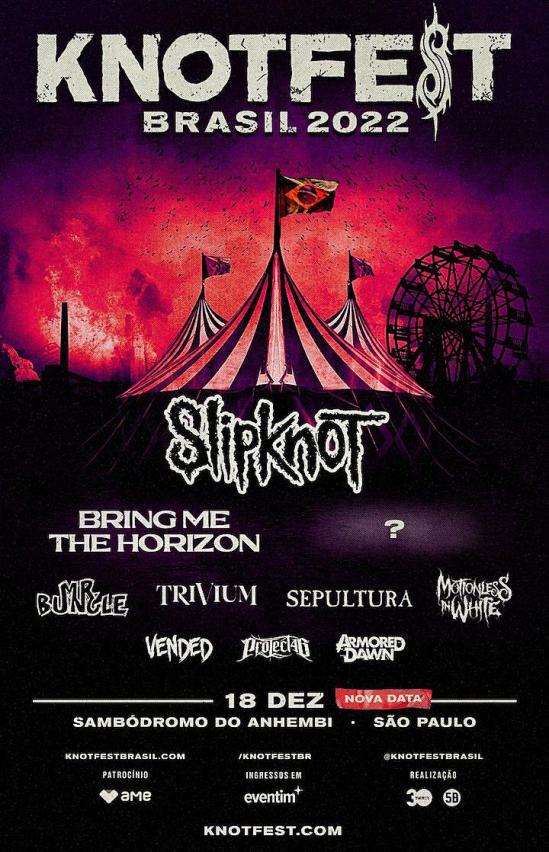 Slipknot have revealed the details for “Knotfest Los Angeles.” The event will take place at Banc Of California Stadium in Los Angeles, CA on November 5 and it will feature the following: Slipknot, Bring Me The Horizon, Killswitch Engage, Fever 333, Code Orange, Vended, and Cherry Bombs. Notably, “Knotfest Los Angeles,” “Knotfest Iowa,” and the “Knotfest Roadshow” will find Slipknot celebrating the 20th anniversary of “Iowa.” 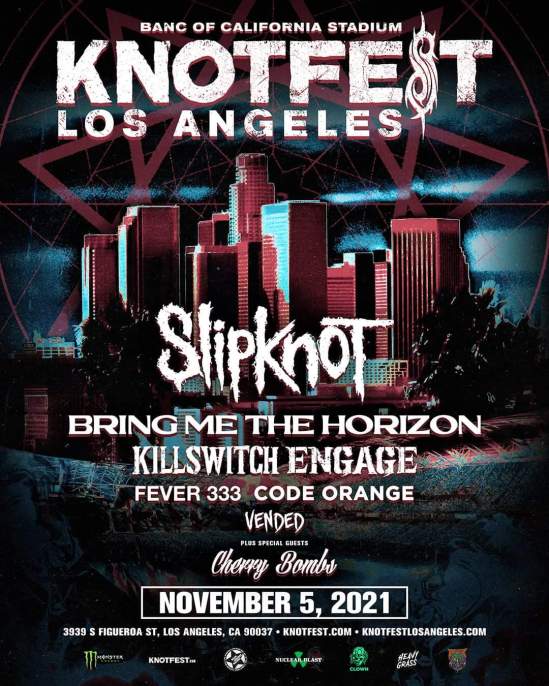 Slipknot have revealed the details for “Knotfest Iowa.” The festival will take place on September 25 at the National Balloon Classic Field in Indianola, IA and it will feature: Slipknot, Faith No More, Megadeth, Lamb of God, $uicideboy$, Gojira, Trivium, Tech N9ne, Fever 333, Knocked Loose, Turnstile, Gatecreeper, and Vended. With this news, Slipknot have also confirmed that they returned to the studio last month to work on new music. M. Shawn “Clown” Crahan said the following about the upcoming festival:

“A home show is always insane, but a home Knotfest show will be on a whole other level. Prepare. See you soon for the newreality. Stay (sic).”

Slipknot have announced that Knotfest.com has been converted into a new rock/metal hub. The website will now feature a variety of things including “news, exclusive interviews, performances, merchandise and more.”

The following was said in a press release:

“Slipknot and the team behind their Knotfest brand have today revealed that Knotfest.com has been re-imagined to create a global multi-media hub for news, exclusive interviews, performances, merchandise and more dedicated to covering the very best of art, music, culture and media for fans of heavy culture.

To celebrate the launch in explosive fashion and marking what would have been the kick-off weekend of the highly anticipated Knotfest Roadshow US tour, Knotfest.com will be hosting an exclusive Knotfest Roadshow streaming event this Friday, May 29th at 3pm PDT.

This special online event will be hosted by Beez and feature exclusive concert streams and interviews with Slipknot, Underoath and Code Orange. In addition, a limited Slipknot Knotfest Roadshow merch drop will be available here for 72 hours only (starting Friday morning), featuring the tour merch collection that would have been sold this summer, while strictly limited Knotfest merch is available now here.

Slipknot will be streaming their 2019 headline set from Graspop Festival in Belgium, filmed shortly before the band’s chart topping album, We Are Not Your Kind was released. It will preview with an exclusive interview with Clown conducted by Ryan J Downey.

Underoath will be streaming their performance from The Brooklyn Bowl in Las Vegas from 2016 where they performed their seminal album, They’re Only Chasing Safety in full and will feature a portion of Ryan J. Downey‘s Deep Dive interview with Underoath frontman, Spencer Chamberlain conducted by Ryan J Downey.

Code Orange will be streaming their ‘Last Ones Left: In Fear of the End’ performance that originally aired on Twitch back in March to launch their critically acclaimed album, Underneath and will feature a portion of Clown’s Electric Theater chat with frontman Jami Morgan.

The newly re-imagined Knotfest.com will be a fan-centered platform, created by artists for their fans. Dedicated to expanding the rock and metal genres and providing a one-stop destination showcasing the very best the culture has to offer from emerging bands you need to hear, right through to the biggest and most established artists.

Knotfest.com will capture all facets of the culture across visual, audio and written media. Bringing fans an elevated, unfiltered media experience directly from their favorite artists through exclusive think-pieces, curated playlists, playthroughs and more.

The highlight of this artist created content will be the brand new audio interview series, The Electric Theater hosted by Clown – a weekly, laid back conversation featuring discourse with the world’s most interesting people. The first episode is live now and features Jami Morgan of Code Orange, check it out here.

Building on the success of the weekly concert streaming series (which has already reached 18 million fans so far), Knotfest.com will be launching several exclusive web-series from top content creators from within the genre. These include

The Deep Dive hosted by Ryan J Downey
Longtime journalist Ryan J Downey presents the Deep Dive, featuring in-depth conversations focused on unique aspects of careers, culture, and collectibles. Downey has worked as writer, editor, correspondent, and producer for MTV News, Marvel, Billboard, and the Hollywood Reporter, among other outlets. He is the host of the MI Conversation Series and founder of the PopCurse podcast network, as well as a longtime artist manager in the rock, metal, and punk genres.

The Deep Dive will air every Thursday. The series kicks off this week with Spencer Chamberlain from Underoath.

The Downbeat With Craig Reynolds
The popular podcast hosted by Craig Reynolds, drummer of Stray From The Path, now has a new home. The show features long-form interview hangs with a variety of Craig’s fellow musicians and friends.

You can catch the first Knotfest episode of The Downbeat with Alessandro “VMan” Venturella here.

Knotfest.com launches today with articles and interviews from August Burns Red, Body Count, Black Dahlia Murder and more with essential albums and playlists curated by Jesse Leach of Killswitch Engage and Mark Holcomb of Periphery. Knotfest.com has also launched 5 new original playlists to showcase the very best from the extensively diverse world of rock and metal –

Tribe Leaders – The biggest tracks from the biggest bands right now.
New Flesh – Keeping you up to speed with the best new releases.
All Out Workout – Your ultimate workout companion.
Heavy Quarantine – A soundtrack for these unprecedented times featuring tracks from your favorite artists
Pulse of the Maggots – Showcasing the best emerging talent and where you’ll find your new favorite band.

With plenty more exciting additions still to be unveiled, Knotfest.com looks forward to awakening your senses through this amazing culture we’ve all built together.”

More bands have been added to Knotfest Meets Forcefest. The event will take place at Parque Deportivo Oceanía in Mexico City on November 30 – December 1 and the updated daily lineups can be found below:

More bands have been added to Knotfest Meets Forcefest. The event will take place at Parque Deportivo Oceanía in Mexico City on November 30 – December 1 and the updated daily lineups can be found below: 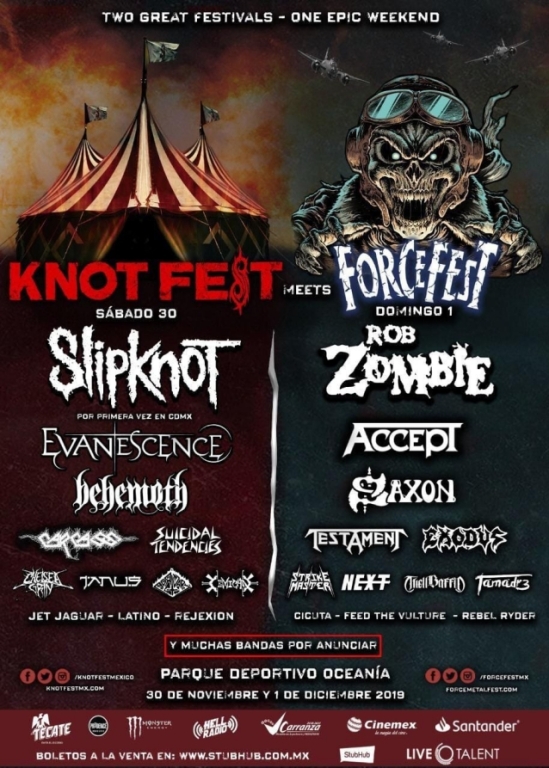 Slipknot’s Knotfest will be teaming up with Hellfest for a “Knotfest Meets Hellfest” mini-festival in Clisson, France. The event will take place on June 20, one day before Hellfest Open Air officially kicks off. The following bands will perform: Slipknot, Rob Zombie, Papa Roach, Ministry, Sick Of It All, Sabaton, Amon Amarth, Powerwolf, Behemoth, and Amaranthe. Slipknot commented:

“As you know, owners of three-day passes are more likely to come on Thursday in Clisson. Delighted by these 10 exceptional names, Hellfest has agreed to lend its main stages to allow fans to enjoy another mini-festival. Best of all, we hope that this bonus initiative will make you happy and that you will keep enough energy to follow the three days of Hellfest. All hope is not gone. See you in Hell!”

During an appearance on Jamey Jasta’s (Hatebreed) The Jasta Show, Corey Taylor (Slipknot, Stone Sour) was asked about the possibility of expanding Knotfest to a 20-30 date tour. He responded by saying “it’s definitely something [they’re] thinking about.”

“It’s definitely something we’re thinking about and it’s one of the reasons why we built it the way we have. For us it was about the foundation of the brand itself. It was making sure that this was something that we could continue to build up. You don’t want to go from zero to a million.

So, it’s something that we’re definitely thinking about—certain spots in America—making ‘Knotfest‘ dates. And, this is important, we’re not afraid to take it away for a year and then bring it back.

That’s what people don’t understand. It’s not completely gone, ’cause we’re doing the one in Colombia. But, it doesn’t have to be a yearly thing.

Do it one country one year, do it in a couple other countries the next year. It doesn’t have to be something like that so you’re constantly, constantly stabilizing your brand and making money and doing something cool… And you’re also creating supply and demand.”

A Knotfest pop-up store will be opening at The Palladium in Los Angeles, CA on October 30. The store will feature merch, discounted tickets, and more, with members of Slipknot expected to make an appearance. This year’s Ozzfest Meets Knotfest will be held in San Bernardino, CA on November 4-5. Slipknot will not be performing.

Come join us for the 1st ever @Slipknot / #KNOTFEST Pop-up Store at Hollywood Palladium on October 30th from 6pm-9pm! A free event with all ages welcome including: . • Rare Slipknot & Knotfest merch • $20 tickets for Knotfest OR Ozzfest (including fees!) • Meet members of Slipknot • Go back through band history with Slipknot Museum pieces spanning their entire career • Come dressed as your favorite Slipknot member & get entered to win a VIP package to hang with Clown from Slipknot at Knotfest on November 5! • Grab a drink from the Palladium’s full bar