Bloodbath have postponed their North American tour. The band were unable to make the trek due to visa issues.

“First of all, this is an announcement we hoped we would never have to make… But now left in anger and frustration, we are unfortunately forced to postpone our North American tour and our appearance at Maryland Deathfest, yet again.

Despite applying for our visas over seven months ago (a process that should take three), they have still not been processed in time due to reasons beyond our control. We’ve done absolutely everything we can to try and salvage this bullshit and make this tour finally become reality, but we have to accept our fate at this point, that it will simply not happen.

Given that this is the third time this tour has had to be postponed, we both feel and share your disappointment, but we assure you that despite the hardships associated with this tour, we have not given up and consequently will reschedule the dates as soon as we’re able to rid the bureaucracy and lift this curse of delusion.

Until then, stay safe and stay strong and we hope to see you all sooner than later.

Refunds for all the club shows will be available from your point of purchase.”

Bloodbath have signed a new worldwide deal with Napalm Records and are currently working on new music. The band said the following about that:

“Just as we’re about to enter our next exciting chapter of Bloodbath, we’re pleased to say that the band is in the good hands of a new label. By joining forces with the mighty Napalm Records, Bloodbath will proudly make sure our old school death metal continues to pummel onwards and upwards. Let the Napalm rain!”

Bloodbath have announced some May 2022 North American shows with Xael. Here’s the dates: 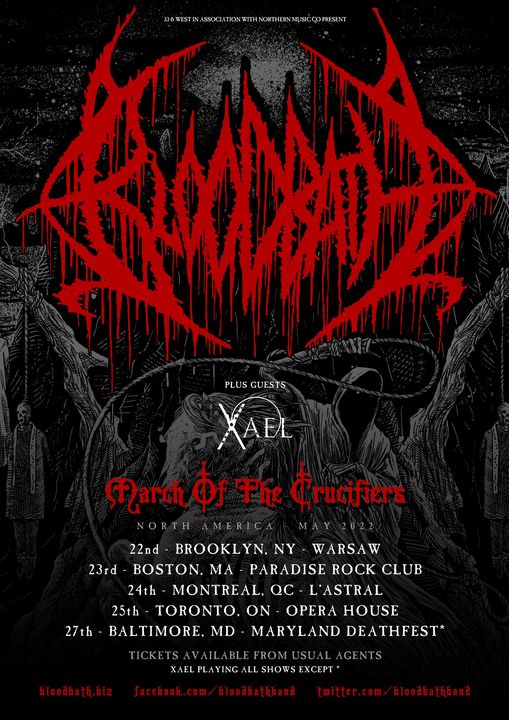 Bloodbath have announced a North American tour with Necrot and Tragedy Of Mine. Here’s the dates:

Joakim Karlsson has announced his departure from Bloodbath. For now, Tomas Åkvik (LIK) will be handling live guitar duties for the band.

“I am putting away my Bloodbath vest for good.

I have had pretty much only good moments with the band, and I’m glad to have been a part of it for the last year and a half, but now I’ll do other things. (I vaguely remember having a main band which hasn’t gotten the attention it deserves during the last year. I think I’ll focus on that for a while.) Alright… Later, Bloodbath fans. I hope I at least managed to trick some of you into listening to Craft.

By the way, some of you were making guesses about what songs I wrote for TAOSID. I wrote ‘Wayward Samaritan‘ (music/lyrics), ‘Only the Dead Survive‘ (music, together with former Craft guitarist John Doe), ‘Ride the Waves of Fire‘ (music/lyrics) and ‘Wide Eyed Abandon‘ (music).”

“We’d like to thank Joakim for his time in Bloodbath, his contributions to TAOSID and we urge you all to submit to his continual work with black metal masters Craft. Live guitar duties will proceed with Tomas from LIK – Sthlm.”

Macquarie University’s music lab has conducted a new study in which 32 death metal fans and 48 non-fans were shown innocuous images in one eye and violent images in the other, while listening to either Bloodbath‘s “Eaten” or Pharrel Williams‘ “Happy.“ After the test, researchers found that the death metal fans were not desensitized to violence and that listening to the music actually brought them feelings of joy and empowerment.

“[Death metal] fans are nice people. They’re not going to go out and hurt someone.

The dominant emotional response to this music is joy and empowerment. And I think that to listen to this music and to transform it into an empowering, beautiful experience – that’s an amazing thing.”

“The majority of death metal fans are intelligent, thoughtful people who just have a passion for the music. “It’s the equivalent of people who are obsessed with horror movies or even battle re-enactments.”

You can read more HERE.

Bloodbath have premiered a new video for their new song “Chainsaw Lullaby.” This track is from the band’s new album, “The Arrow Of Satan Is Drawn,“ which will be released on October 26. Anders “Blakkheim” Nyström commented:

“I wanted to keep it really simple and uncomplicated whilst retaining an evil groovy drive to make the song engage in headbanging action and sing along exercises. Having started a ‘red’ thread, I then locked in the chainsaw concept as a dual tribute to the Boss HM-2 guitar pedal sound as well as my love for the horror slasher genre and had both the music and lyrics going at the same time. I’ve always been a fan of lyrical paradoxes and the song title was just waiting to happen.”

Bloodbath have premiered a lyric video for their new song “Bloodicide.” This track features Jeff Walker (Carcass), Karl Willetts (Memoriam/ex-Bolt Thrower), and John Walker (Cancer) and it will appear on the band’s new album, “The Arrow Of Satan Is Drawn“ (out October 26).

“The lads play a part in representing the backbone of the old school British Death Metal scene, which has also been a big influence on Bloodbath since the beginning.”

“I owed Nick a tenner, so he told me instead of sending the bailiffs round he would kindly let me pay off my debt by contributing vocals to his new album. Imagine my great disappoint when I found out it wasn’t for THAT band but, was in fact for Bloodbath. I have great faith in him that my vocals will be lower than his in the mix.”

“I have known Nick Holmes for over 30 years – so when he asked me to do some vocals for the new Bloodbath album how could I refuse? The opportunity to do things like this in life don’t often come twice so I am really pleased to contribute in a small way to this legendary opus!”

“Bloodbath is an amazing band and I’ve had the chance to do some vocals for their new, killer album along with eff Walker and Karl Willetts. It’s been a bloody honour and a lot of fun!!”

Bloodbath have announced that their new album “The Arrow Of Satan Is Drawn” will be released on October 26. The effort was recorded with Karl Daniel Liden at Ghost Ward, City Of Glass, and Tri-Lamb Studios earlier this year. Notably, one track on the effort, “Bloodicide,“ features a number of special guests including: Jeff Walker (Carcass), Karl Willetts (Bolt Thrower), and John Walker (Cancer). 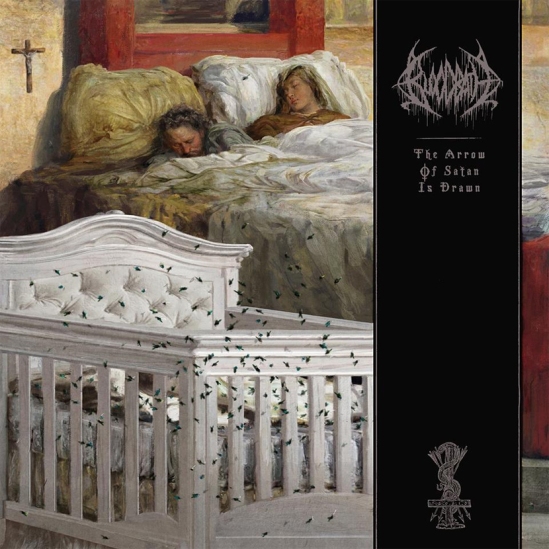 “The Arrow Of Satan Is Drawn” Track Listing:

Guitarist Anders “Blakkheim” Nyström said the following about the album:

“What are we presenting with this album? Humanity’s unfaltering march prone towards downfall. The threat to this world isn’t from far beyond the sun, the enemy is right here, within the walls. Only the god of emptiness will survive us all. The arrow of Satan is drawn!”

“There’s no mitigating circumstances coming your way any time soon… The world is a mad place full of darkness, horror, disease and terror! Hell on Earth is real and not just limited to fiction. The dark ages transcend all frontiers, ever present but yet unseen.”

He also added the following about “Bloodicide“:

“It wasn’t deliberately planned to be just British guests, but as it randomly turned out that way, it became a really cool feat!. Nick [Holmes], Jeff, Karl and John are all legends respectively within the UK death metal scene and we’re proud to bring them all together on our little old school soiree to tribute the days of old.”

It looks like Bloodbath have officially finished their new album. The band said the following on Facebook:

“The new album is officially DONE and the master is now leaving us and heading to Peaceville! Curious about the artwork? The album title? The song titles? The number of songs on the album? The release date? The formats? The line-up? The sound and production? The fuckin’ legendary featured guests? Watch this space….”