“We at Napalm Records are thrilled to propel Andrew W.K. to new heights, having been longtime fans of the work since the beginning. To say partnering (and partying) with the team at Andrew W.K. has been exciting and enlightening is an understatement. We’ve got our seat belts on and secured tightly, and we’re ready to party party party our way into the future of Andrew W.K.!”

Kristine Williams also issued a statement on behalf of the Andrew W.K. company:

“Everyone at Andrew W.K. and The Louise Harland Corporation is very pleased to have this opportunity to work with Napalm Records. We look forward to partying harder than ever before!”

“I’ve worked on Andrew W.K. since the late ’90s, and it’s been a wild ride since day one. Still, after all the twists and turns, I have an uncanny feeling that the most twisted turns are about to take place, and I’m confident the good people at Napalm Records will hold on tight while we navigate the next loop in this never-ending rollercoaster ride.

It’s rare to find a group of music industry veterans that not only grasp the core of what we’ve been doing for the past two decades, but also have a shared vision that will take us forward and over the edges. They’ve seen through the big picture, they’ve accepted what’s going on in the background, and they’ve agreed on what’s to come. Most importantly, they’re not afraid to push this next chapter and reconnect the dots from 1999, 2001, 2005, 2009, and the tears spanning 2011 and 2018. O praise the Party Gods!”

Evile have signed a new worldwide deal with Napalm Records. The band’s new album will be released through the label in 2021.

“We’re extremely excited to announce our signing to Napalm Records! We’d heard a lot of great things about Napalm over the years and it’s an honor to join the ranks of some excellent bands. Evile haven’t released any music since 2013 so we promise to deliver a crushing thrash metal classic which I believe will surprise everyone; even the die-hard “Grave” fans.

As previously announced, Matt is unfortunately no longer a part of the band, so I’ve taken over on vocal duties while remaining on lead guitar too. Also, please welcome our newest member, Adam Smith of RipTide, on rhythm guitar. We begin recording with producer and engineer Chris Clancy on September 17 at Andy Sneap‘s Backstage Studios. We can’t wait for you to hear what we have in store!”

“I am super excited to work with Ol Drake and my favorite British Thrash Metal band Evile. I’ve been a fan since “Enter The Grave”, and the new demos I’ve already listened to sound simply amazing! Expect a monster of an album in 2021! Welcome to the Napalm family!”

Wizardthrone have signed a new deal with Napalm Records. That project features members of Alestorm, Nekrogoblikon, Aether Realm, and more.

The following was said about the band:

“After countless eons shrouded in secrecy, the elder council of Wizardthrone has been summoned forth from the stellar void in the great blight of 2020, replete with astonishing marvels to horrify and enthrall all who might encounter their majesty. Drawing influence from the greatest extreme metal bands of years past, Wizardthrone shall be imminently unleashing their initiatory incantation upon the world.”

The group also added the following about signing with Napalm Records:

“It is with tremendous exultation that we announce our necrosophic pact with the most esteemed patrons of art, Napalm Records! Immortalise this day in song, humans, and kneel before your Supreme Wizard Overlords! Liber Falxifer! Hail the Non-Euclidean Hypercrystal!”

Tetrarch have signed a new deal with Napalm Records. The band’s upcoming album “Unstable” will be released through the label.

“None of us in Tetrarch have ever been shy about the goals that we have for this band. Therefore, it is no secret that since the beginning we have always made our goal to become one of the biggest modern metal bands of this generation. We are extremely excited to have found a partner for this journey with Napalm Records, and it is very apparent that they believe in us to the same degree. They are ready and willing to work with us however necessary to take Tetrarch to the top. We look forward to continuing this ride with them.”

“Welcome Tetrarch – undoubtedly the hottest newcomer and soon to be a household name in the Metal world! They are fresh and exciting, and we are proud and thrilled to work this amazing band!”

“I was really surprised when Napalm got in touch with us interested in signing the band right after we announced Crypta officially! But more than surprised, I felt just really happy, once I’ve always had a nice relationship with them during my previous ventures, so being able to keep working with this label now is just great, it feels like family! Overall, the band is very excited and feeling so lucky for having the chance of such a big kickstart! We can’t wait to get things going and we hope it’s gonna be a fruitful path together!”

“From what we could lay our ears on thus far, their debut album is going to be nothing but crushing and will offer a fresh outlook on old school death metal!”.

BPMD, the band featuring Bobby “Blitz” Ellsworth (Overkill), Phil Demmel (Vio-lence, ex-Machine Head), Mike Portnoy (ex-Dream Theater, etc.), and Mark Menghi (Metal Allegiance), have premiered a new video for their cover of Aerosmith’s “Toys In The Attic.” This track is from the band’s new covers album “American Made,“ which is set to be released on June 12.

“I remember waaaaaaaaaaay back when Overkill formed, we were cutting our teeth on covers as I was finding my way around the mic. The Aerosmith covers were right in my wheelhouse, so when Mike [Portnoy] picked ‘Toys’ to cover, I was like… ‘Hell Yea’!”

“It was tricky because Aerosmith have two guitarists, Joe Perry and Brad Whitford, playing different things. So, as one guitar player, I had to pick a medium place between the two that sounded good. I thrashed it up a little by adding a lot of down picking and some gallops and triplets.” 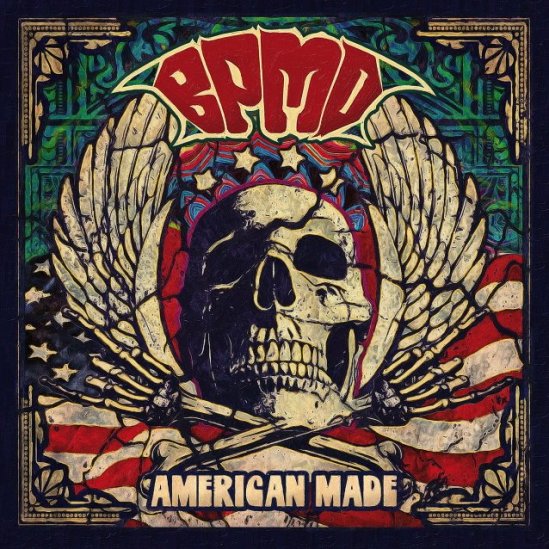 “We’re super excited about our first BPMD record. Last summer, I was inspired and came up with this crazy idea and here we are, not even a year later, and it’ll see the light of day in these very trying times. The planet needs something to feel good about, and I 100% whole-heartedly believe these tunes will do the trick. Buckle up and make way for BPMD…”

“The BPMD sessions were very fun. They took us all back to our roots and even pre-roots. As it developed, we all realized it was something special, as did Napalm Records, with one listen!”

BPMD are currently scheduled to make their live debut at the Old Bridge Elks Lodge in New Jersey on May 30 as part of “Bulldozer Bash 5.” That event will benefit the Old Bridge Militia Foundation.

Ektomorf have signed a new deal with Napalm Records. The band’s new album is expected to be released through the label later this year.

“I am very happy and proud to be a part of the Napalm family now. This is definitely a new chapter in my carrier that reaches the next level with the combination of Napalm Records and Napalm Events. Napalm Records is the best label I can imagine to release the new Ektomorf album and to go new ways together with us.

Napalm Events is very well established by now and I can’t wait to go on a world tour again with the new album and play further countries. I am very thankful to my new manager Tom, he made this work out. We visited together the Napalm team in Berlin last week. We had very good conversations and a lot of fun.

The combination of Napalm Records and Napalm Events is really unique because of the close cooperation. I am super motivated and can’t wait to start with the Napalm team. The new chapter starts now!”

“We have been patiently waiting for the right moment and partners to collaborate with, so we’re so pleased to announce that we have found a great fit with Napalm Records and could not be more excited about what we will accomplish together.”

Explosive Rockers Sumo Cyco Sign Worldwide Contract with Napalm Records Over the course of the past several years, Ontario, Canada’s SUMO CYCO have proven themselves as one of, if not the, hardest working band in the heavy music underground – garnering an undeniable following of fans with their impressive mixture of influences ranging from metal to pop and everything in between. Celebrated for their DIY attitude, viral savvy and their explosive live performances that continue to convert new audiences around the world, SUMO CYCO have somehow maintained their status as the industry’s best kept secret – until now. After witnessing their live performances, it’s immediately clear that SUMO CYCO is lightning in a bottle. Napalm Records has taken notice and is pleased to announce that the band has officially signed a worldwide contract. SUMO CYCO says regarding the signing: “We have been patiently waiting for the right moment and partners to collaborate with, so we’re so pleased to announce that we have found a great fit with Napalm Records and could not be more excited about what we will accomplish together.”

“We are pleased to inform you that we have extended our great collaboration with the Napalm Records team. To have people behind us that help to spread the word of metal with know-how, energy and — above all — passion is great.”

+++ POWERWOLF – re-sign with Napalm Records +++ Friends, we are happy to announce that we have re-signed to Napalm Records. Matthew Greywolf states: "We are pleased to inform you that we have extended our great collaboration with the Napalm Records team. To have people behind us that help to spread the word of metal with know-how, energy and – above all – passion is great." Napalm Records managing director Markus Riedler adds: "We already achieved so much with Powerwolf, it's excellent that we can continue our good and trustful cooperation with the band. They have everything to grow further and eventually be accepted to the Hall of Fame of Metal." . . . #powerwolf #themetalmass #officialpowerwolf #napalm @napalmrecordsofficial