The Melvins have shared an acoustic cover of The Rolling Stones’ “Sway.” This track is from the band’s new double acoustic album “Five Legged Dog,“ which will be released on October 15 (vinyl out January 28).

Ministry have postponed their “Industrial Strength” tour once again due to the coronavirus pandemic. The trek is now scheduled to take place in spring 2022 with The Melvins and Corrosion Of Conformity set to open. 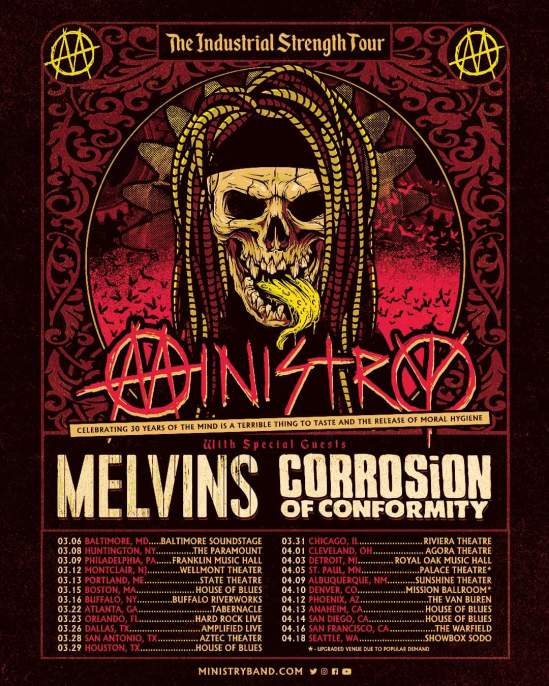 “Out of an abundance of caution for the health and safety of the band, fans and venue staff, Ministry’s upcoming tour – scheduled to kick off in October – has been moved to March and April 2022. (the) Melvins and Corrosion Of Conformity will now appear on all show dates as the tour’s special guests. Each show date will celebrate 30 years of Ministry’s landmark album The Mind Is A Terrible Thing To Taste as well as debut new songs from the forthcoming 15th studio album Moral Hygiene, out October 1 via Nuclear Blast Records. Tickets are on sale now with the exception of the St Paul, Montclair and Huntington dates that will go on sale at 10 am local time on Friday, October 1.

Due to scheduling changes, some of the original show dates have regrettably been canceled as some venues are not available for this updated time period; as well, some new show dates have been added. All tickets will be transferred to the new dates. Refunds available at point of purchase. More show dates will be added to this tour and announced soon.”

The Melvins have shared an acoustic version of their song “Revolve.” This track is from the band’s new double acoustic album “Five Legged Dog,“ which will be released on October 15 (vinyl out January 28). Buzz Osborne commented:

“I wrote Revolve on an unplugged electric guitar in a hotel room in San Francisco and it sounded great! Obviously then it wasn’t hard to make an all acoustic version of ‘Revolve‘ work. It’s a great riff.”

The Melvins have shared an acoustic version of their song “Pitfalls In Serving Warrants.” This track is from the band’s new double acoustic album “Five Legged Dog,“ which will be released on October 15 (vinyl out January 28). Vocalist/guitarist Buzz Osborne commented:

“’Pitfalls’ is one of my favorites. A severely underrated song and one that works very well on acoustic.”

The Melvins will be releasing a double acoustic album titled “Five Legged Dog“ on October 15 (vinyl out January 28). The 36-track set will feature stripped down versions of songs from throughout the band’s career. 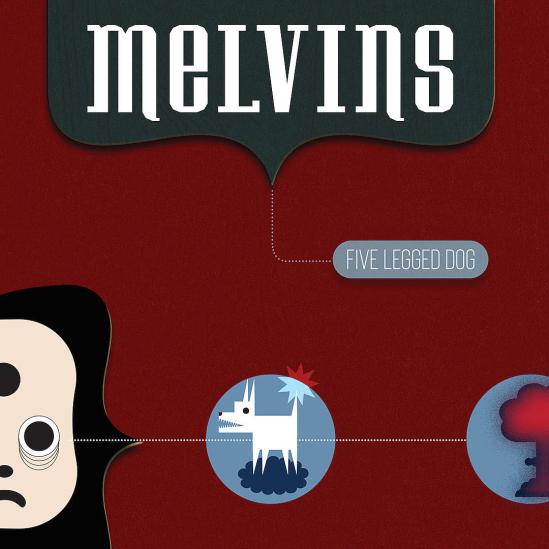 “I knew I wanted to do something ridiculously big. 36 songs reimagined by us acoustically is certainly ridiculous but it works. The magic of the songs is still there regardless of it being acoustic. Since we weren’t touring we had the time to do something of this size. I’m very excited about this record. Dale and Steven did a fantastic job on this. I think it’s a very special record. I can’t think of anyone else who’s done something like this.”

The effort’s first single, an acoustic version of “Night Goat,” can be found below. Dale Crover had the following to say about that track:

“I think people will be surprised that we can do an acoustic version of a song like ‘Night Goat‘ without losing any of the heaviness. We also worked hard on the vocal arrangements. People are going to freak out!”

Melvins will be reissuing “(A) Senile Animal,” “Nude With Boots,” and “The Bride Screamed Murder” on limited edition vinyl on June 25. The records will include 12-page booklets with expanded artwork from Mackie Osborne and they can be pre-ordered HERE. 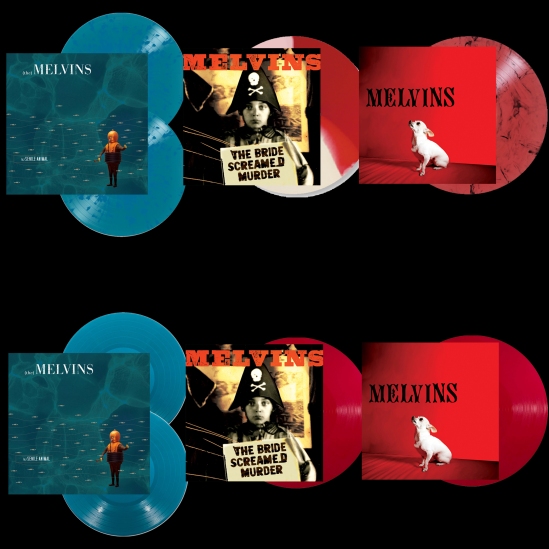 Melvins have announced another virtual show. The event, which the band are calling “Melvins TV, Volume 3: May Day! May Day! May Day!,” will stream on May 1 and it is expected to feature both electric and acoustic sets. Tickets can be found HERE. Buzz Osborne commented:

“Melvins TV #1 and #2 were a blast. So you can expect more blasting with #3. Remember to inhale deep.”

During a recent appearance on the “Chuck Shute Podcast,” Dale Crover (Melvins) recalled the time he was pranked by Adam Jones (Tool). Crover said that Jones had a cop mess with him by planting cocaine and a gun in his bag.

“We got pulled over in Texas, right outside of Houston. And the cop finds some weed on the ground, right outside of our van. It wasn’t ours… Well, I mean, funny enough that I knew it wasn’t ours. Cuz I knew none of us had any weed. None of us are stupid enough to have any weed driving through Texas, at least I thought.

Especially the guy who got blamed for that part, because I knew that he didn’t even smoke weed, which was which was our road manager at the time.

And anyway so yeah we get pulled over by this, you know, big, huge Buford pusser style Southern cop and he finds this weed and he’s ‘Whose weed is this? All right, everybody out of the car.’ And he gets us all out of the car and he’s like, ‘I’m gonna search all your bags’, you know he’s being the total dick cop or whatever.

And I’m kind of talking to him like you know ‘Hey that’s not ours.’ [He replied] ‘Oh yeah, you the spokesman for the group? You smoke weed?’ And so, he goes to search my bag where I can’t see, he’s like behind our van. And then he comes up and he’s like ‘You come here.’ And I go back there and I see my bag on the hood of his car. ‘What the fuck is sticking out of my bag?’

And so he cuffs me. Then he starts pulling stuff out of my bag, he’s like ‘Look what we got here.’ He pulls out a gun pulls and I’m like what? He pulls out a 9mm and he’s like ‘You got firearms, that’s a federal offense in Texas here.’ And then he pulls out scales and I’m like what? ‘You got scales.’ And I’m just going like what the fuck. And then he’s like, ‘Oh Lord, look what we got here.’ And he pulls out the biggest bag of cocaine I’ve ever seen in my life. ‘Oh, man. Looks like you’re going to prison.’

You know, I’m just like ‘lawyer.’ And he’s like ‘Oh really, you want a lawyer after all this? You don’t want to get DEA down here and talk to them.’ and I’m like ‘No, lawyer. Lawyer.’ All right. And then, and then he puts me in the car… I’m totally just thinking like, you know, okay, he’s planted all this stuff in my bag. You know what I don’t get, you know, what’s his… What’s his scam here?… So I tried to figure out what the deal was… I’m like, does he want money? you know, [should I] bribe him? Like ‘If you look at my bag, a little further, you might find something else in there officer.’

So then he puts me in the car. And then, you know, I’m like ‘Hey can I talk to my friends up there?’ And he’s like ‘I don’t know why, he’s going to jail too. He’s the one I found weed on.’ I’m like ‘Please.’ and he says ‘All right.’ And so my, my road manager comes back and looks at the car and sees all this stuff spread out. I’m like, ‘You see what’s going on here? He planted that stuff in my bag. Don’t let him look in your guy’s bag without you watching him.’ And so then he starts explaining to him like, ‘I have reason to believe that this is not his stuff at all.’…

‘Oh really, who is this guy?’ And he’s like oh, his name’s Dale Crover, he plays in this band the Melvins.’ And he’s like ‘I’ve never heard you guys, I guess your show’s canceled tonight, huh?’ And Snoop Dogg had just come through and had been busted and [the cop] was like ‘This is going to be on CNN just like the big Snoop Dogg bust.’ And then he gets me out of car and I’m like ‘Okay. He’s like, Well, you know, I just want to tell you guys, Adam Jones from Tool said you guys are pranked.’ He was friends with Adam. That’s how that happened.”

Crover went on to say that he has yet to get back at Jones.

Melvins have released their cover of Harry Nilsson‘s “You’re Breakin’ My Heart.” The track, which has been retitled “1 Fuck You,” is from the band’s new album “Working With God,” which will be released on February 26. Buzz Osborne commented:

“Why haven’t we recorded this song before now? It says it all. Nilsson was a genius!!”

Melvins have announced a virtual “Divine Monkeyshines: Valentine’s Day Special.” The event will stream on February 14 and tickets can be found HERE. Buzz Osborne commented:

“Round two of Melvins TV! Just in time for Valentine’s Day! Five different songs plus band interviews and other cool stuff. All this fine entertainment for only $5.”