Six Feet Under have announced a European tour with MagnaCult, Mecalimb, and Psykotribe. Here’s the dates:

Six Feet Under have premiered a lyric video for their new song “Gore Hungry Maniac.” This track is from the band’s “Unburied” release, which is now available in digital outlets. The effort, which can be streamed in full below, features nine unreleased songs from the “Undead,” “Unborn,” and “Torment“ recording sessions. Chris Barnes commented:

“I feel ‘Unburied’ is something special and interesting to release that is different, being that this is our first digital-only release and the songs are all in their rawest and earliest form. It was also a shame for the songs to just sit there and go to waste; I knew the fans would dig them, and also everyone involved worked so hard writing and putting them together. I always felt like the tracks were excellent Six Feet Under material, and wanted to finish and release them at the time of each release — but there was just so much material that was put together for the ‘Undead’ and ‘Unborn’ sessions that eight songs were basically left over in the demo stages. Also, one song from the ‘Torment’ session that Jeff Hughell wrote — ‘As The Dying Scream’ — was left over in its demo stage as well. Hopefully you enjoy these tracks and it holds you over ’til the next full-length album!”

Six Feet Under have announced that they will have a new release, titled “Unburied,” available in digital outlets tomorrow (July 6). The effort will come with nine unreleased songs from the “Undead,” “Unborn,” and “Torment“ recording sessions. The band will also debut a new lyric video for “Gore Hungry Maniac” tomorrow as well.

Six Feet Under have announced a spring European tour. Infernal Tenebra, Morose Vitality, and Critical Mess will serve as support. 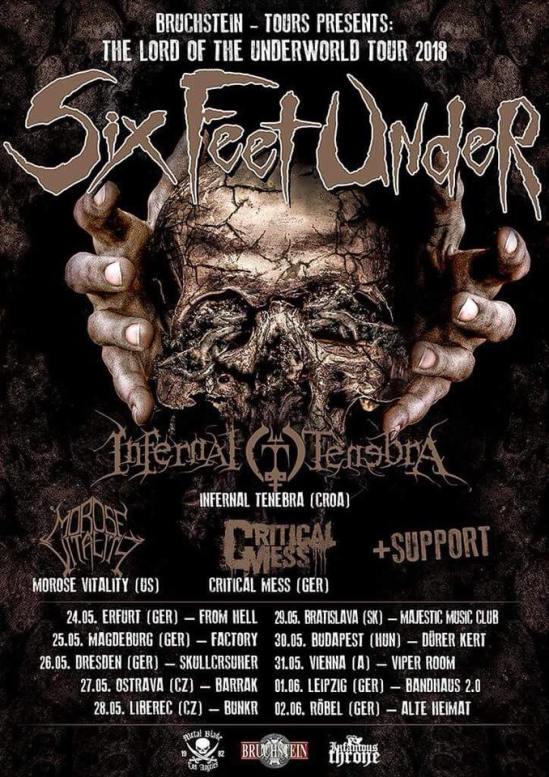 Six Feet Under have announced the addition of ex-Cannibal Corpse/Deicide guitarist Jack Owen to their lineup. Owen previously performed with frontman Chris Barnes when they were in Cannibal Corpse together.

“Hello, hello! First of all, I would like to thank all the fans that pre-ordered and purchased our new album ‘Torment‘, and everyone that is enjoying our new work! Thank you very much! Much appreciated!!

And now, without further ado, it is with great pleasure that I announce and introduce to you our new second guitarist, Jack Owen. As you all know, Jack and I started off together helping form one of the greatest Death Metal bands of all time. Jack and I began talking a few months ago, after his departure from his previous band about joining forces.

From my side of things, it’s going to be amazing to work with Jack again!! We had some intense adventures, to say the least hahaha…and it’s gonna be killer to step on stage with Jack for the first time in over 22 years!!

Jack will be joining SFU for the entire cycle of touring for the new album and beyond!

As you can imagine Six Feet Under is planning a very exciting live set list for you all to freak out over!!!
More info and tour dates coming soon!
Hang on to your skeleton!!

“I’m super excited to work with my metal brother Chris Barnes and the mighty Six Feet Under! We’ve been talking about writing original material for years, and I hope it gets to that point. It would be amazing. For now, I’m looking forward to touring our asses off. I miss Europe, Canada, South America – hell, I just miss touring! It will be an honor jamming with Chris and his current SFU lineup of talented musicians…and performing with Chris will be like reliving our youth. I can’t wait to see all the SFU and old school Cannibal Corpse fans across the globe!”

Six Feet Under are streaming their new album “Torment” in full. The effort was officially released today (February 24).