Suicide Silence have premiered a new video for their latest single “Alter Of Self.” This track is from the band’s new album “Remember… You Must Die,” which will be released on March 10. Mark Heylmun commented:

“‘Alter Of Self‘, musically, is a step in a much more melodic direction than the tracks we’ve released as of late. It’s speaking a much different language, but still has all the bone-shattering groove and breakdowns you’d expect from us. Lyrically, the song isn’t difficult to interpret. It’s about doing such a large dose of mind-altering substance or substances that you begin to worship yourself as god. Tune in and drop out on this one.”

“Remember… You Must Die” Track Listing:

Suicide Silence are streaming a new song titled “Alter Of Self.” This track is from the band’s new album “Remember… You Must Die,” which will be released on March 10.

“It’s been 10 years. Today we want to celebrate Mitch. He was a bigger than life guy. A loving father, brother & husband. Thank you all for keeping Mitch & his legacy alive everyday by listening to the music that he left us. We miss you brother. -Suicide Silence”

Suicide Silence have shared an age-restricted music video for their new song “Capable Of Violence (N.F.W.).” This track will appear on the band’s upcoming album “Remember… You Must Die.” The group commented:

“What would it take to make you retaliate? Even further, what would make you take a life? Is there ever an appropriate time for violence? We live in a world where these questions are unfortunately answered by many all of the time. An eye for an eye leaves the whole world blind, yet humanity continues to crave death and destruction. Are you ‘Capable of Violence?’ This might be the most Suicide Silence video EVER. We hope you enjoy it. Happy Halloween everyone. Heavy as possible.”

Suicide Silence have premiered a new video for their new song “You Must Die.” This track will appear on the band’s upcoming album “Remember… You Must Die.” The group commented:

“‘You Must Die‘ reminds us that time is merciless. Every second the clock ticks we grow closer to death and what happens after our short bout with time is a total mystery. ‘You Must Die’ was written as a reminder to remember death and to not let time be our master.” 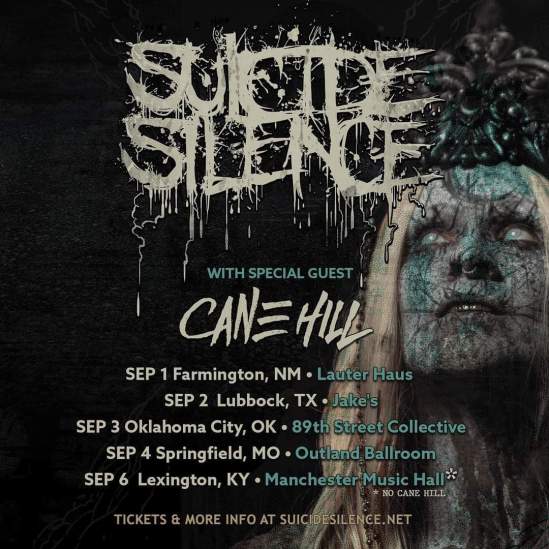 Suicide Silence have revealed that they are planning to release their new album, “Remember… You Must Die,” in early 2023. You can find a teaser for that record below. The band also discussed the effort during a recent episode of guitarist Chris Garza‘s “The Garza Podcast.” You can check that out below as well.

"Remember… You Must Die" 2023 pic.twitter.com/eStrlWpZNU

Suicide Silence have premiered a new video for their new song “Thinking In Tongues.” This track serves as the band’s final recording with drummer Alex Lopez, who recently announced his departure from the group. The band commented:

“This song derives from the chaotic feeling of losing one’s mind. Feeling like you’re choking on every breath you take until you eventually break. Debilitating confusion sets in and your mind begins ‘Thinking in Tongues’; essentially processing thoughts that not even you yourself can understand. In a sense, this song evokes the ultimate sense of helplessness.”

Suicide Silence have parted ways with drummer Alex Lopez. Ernie Iniguez will be filling in for their upcoming shows.

“Suicide Silence & our long-time drummer, Alex Lopez, have mutually agreed to part ways. We wish him nothing but the best moving forward & encourage you all to follow his future endeavors in both music & visual arts. Our good friend, Ernie Iniguez (who recorded drums on ‘Become The Hunter‘) will be drumming with us on the upcoming Chaos & Carnage tour and European festival run.

That all said, we’ll be premiering a new single next week (Alex‘s final studio performance with the band) called ‘Thinking In Tongues‘ that we’re very excited for you all to hear. It will be premiering on SiriusXM Liquid Metal on May 03rd with a full digital release & music video on May 04th.”

“So I’ll make this as short as possible. Suicide Silence and myself have parted ways. I’ll always love them and their families and everything we accomplished together during my time. I wish SS the best. With that said, I’m excited to continue making music and art, and plan to be involved with any projects I find fulfilling.

I’d be truly grateful if you continued to follow and support what I do next, it’s not over for me by a long shot. Love and thank you to all my fans, friends and supporters, the next chapter begins”

Suicide Silence will be celebrating the 15th anniversary of “The Cleansing” by releasing a new “ultimate edition” of the album on June 24. This new expanded version of the effort will include liner notes by the band and tons of bonus material. Pre-orders can be found HERE