Brendon Small has officially released Galaktikon‘s live action “Nightmare” video. Jill Janus (Huntress) is among those featured in the clip, which you can watch below:

Brendon Small has shared a teaser for Galaktikon‘s live action “Nightmare” video, via Nerdist. You can check that out HERE. The full short film will be up on February 22.

It looks like Brendon Small will be releasing a Galaktikon live action short film in one week. He tweeted the following:

“I’m very excited for people to finally hear this record. It’s chock full of exactly what I wanted it to have – unrestrained story, melody, and heaviness. I’m blown away at the positive response to this project already and I can’t wait for your imaginations to go wild.”

Brendon Small (Dethklok/’Metalocalypse‘) has shared a teaser for a new Galaktikon song titled “To Kill A God,” via Alternative Press. This song is from the new album Galaktikon II: Become The Storm“ which will be released on August 25.

Brendon Small (Dethklok/’Metalocalypse‘) has premiered a new Galaktikon song titled “My Name Is Murder.” This song is from the new album Galaktikon II: Become The Storm“ which will be released on August 25.

“I wrote all the riffs for ‘My Name Is Murder‘ in one sitting, and it quickly became a favorite while we were making the record. Story-wise, this song is about a bad dude doing very bad things, and writing from the POV of a bad guy is very, very fun for me.”

In other news, it has also been revealed that the first issue of the Galaktikon comic book, which was written by Small and Eric Powell, will be released on August 2. Fans who attend the San Diego Comic Con will be able to get an exclusive metallic variant early on July 21, during Samall and Powell’s signing at 2:00 PM.

Brendon Small (Dethklok, “Metalocalypse”) has revealed the track listing for his new Galaktikon album “Galaktikon II: Become The Storm.” That effort will be released on August 25. 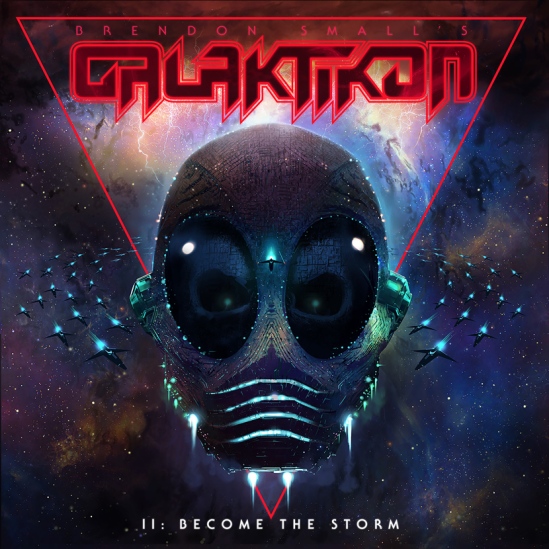 Brendon Small (Dethklok, “Metalocalypse”) has announced that he will release a new Galaktikon album titled “Galaktikon II: Become The Storm” on August 25. Small recorded the effort with Bryan Beller and Gene Hoglan, and a teaser for it can be found below. Small told Nerdist the following:

“This record is a combination of all the sounds I’ve been making throughout my creative life. It’s as heavy as I want it to be and melodic as I want it to be – it’s the bigger, darker record I wanted to hear. And what a way to celebrate my 10 year anniversary of making metal with Gene, Bryan and Ulrich, some of the best in the industry. I’m excited to have it live inside listeners’ heads and let their imaginations take over!”

Brendon Small‘s (Dethklok, ‘Metalocalypse‘) Galaktikon is set to become a six part comic book series via Albtaross Funnybooks. The first issue is expected to be released in August, and the following teaser video was posted: