Will Haven have premiered a new video for their new song “Wings Of Mariposa.” Guitarist Jeff Irwin commented:

“We’re excited to get some new music out! ‘Wings Of Mariposa‘ is a nice little glimpse of what this new record is about. I love this new record and am looking forward to playing most of these songs live! The video was done by our good friend Dave Blackley. He has done a few of our last videos, I love his vision and his edits are awesome. It’s been awesome working with him.”

“I’m excited to finally share this documentary. I love it because it has the same feel as our original release but with a much more mature version of us as well as reliving the history of the band. I have watched it about twenty times, and I still find things in there I didn’t notice the first time.

Dave did an amazing job capturing us and our fans and making an art piece out of it similar to what Brad Oates did with the original Foreign Films. I think it’s a great documentary for new fans to learn about the band and our crazy journey for the past twenty-five years. My advice is to sit back and turn up for volume and enjoy the ride.”

On another note, Irwin also discussed the band’s upcoming album, which they are working on with Joe Johnston at Pus Cavern in Sacramento, CA:

“Making this new album and being in the studio has been a blessing over the past two years. we started writing right before Covid came and then everything shut down, We decided to take the down time to go in and just record the record, so while the world had stopped we were in the studio working and feeling blessed to have an outlet during those two years of Covid, the world was crazy and I think it came out in our music, I don’t like saying this or that about the record all I can say is that the emotion is there and we are happy with the result, look forward to sharing it with new and old fans.”

Will Haven will be performing “Carpe Diem” in full during a special show at The Underworld in London, UK on June 9. The Grey will open. Will Haven commented:

“London! join us in finally celebrating the anniversary of carpe diem, we will be playing the record front to back, we have never done that before so looking forward to it, get tickets HERE. We will also be releasing the doc Foreign Films 2 soon to catch up on the last few years of the band… more to come…WHVN” 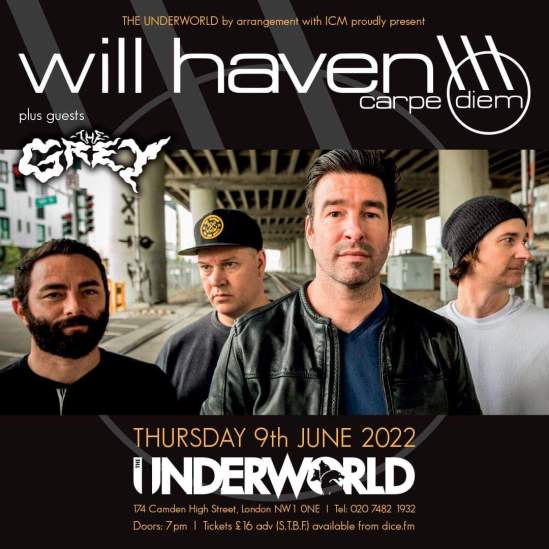 Will Haven have premiered a new video for their song “Winds Of Change.” This track is from the band’s latest album “Muerte.“

It looks like Will Haven are working on new music. The band shared a post to reflect on their recent shows and they had the following to say regarding new material:

“…As for us we are looking to 2020, we have some stuff in the works, until then we are going to be working on new music, it will be our best yet…so thank you everyone for the support on the Muerte touring cycle, it was one of the best years of our lives, cant wait to see whats coming up…til then WHVN singing off…”

Will Haven have announced some European/UK shows. Here’s the dates:

Prior to that run, the group will be playing two U.S. shows:

Will Haven have announced that they will be performing at Saint Vitus in Brooklyn, NY on April 28. Architect, Locked In A Vacancy, and Nerveshatter will serve as support.

It’s been a long time coming but we are finally headed to New York, this is our only East Coast date so don’t miss it! WHVN

Will Haven have premiered a new video for their song “Hewed With The Brand.” This track is from the band’s latest album “Muerte.“ Guitarist Jeff Irwin commented:

“We love this new video. [Director] Brian Cox did an amazing job of capturing the band live as well as tying in the new record really well. It was a fun video to shoot. And a little side note – it was filmed on my birthday…”

In other news, the band have also announced a European/UK tour with Palm Reader. Here’s their updated schedule:

Will Haven are streaming their new album “Muerte” in its entirety. That effort will officially be released on March 23.

Will Haven have premiered a new song titled “Winds Of Change,“ via Metal Injection. This track is from the band’s new album “Muerte,“ which will be released on March 23.

“This is probably my favorite song on the record. It was written somewhat early on and went through a lot of changes before we were ultimately happy with it. I envisioned something chaotic – that stress you might feel when you are about to die, and then I wanted the ending to be epic like you were floating away. So, capturing that emotion took some time but I think we did it. It was a lot of fun to make… this was a breakthrough song for us, as far as what we can possibly do with our music.”