Vampire have premiered a lyric video for their new song “Serafim.” This track is from the band’s new album “Rex,” which will be released on June 19.

”This was the first song title we had for the album, and its style lead the way for all the others and for the album title as well. However, these were the last lyrics to actually be penned. Inspiration struck unexpectedly one dreary October morning as I pondered the famous monologue at the end of the film Blade Runner: “I’ve seen things you people wouldn’t believe”. What follows is probably the best simile of all time. Hugely inspirational and obviously impossible to outdo.”

“‘Serafim’ is one of my faves on the Rex album. I’m especially honored that my old childhood friend David Forsberg (of Skogen Brinner fame) helped us out with the video for the song. He basically took his own Vampire footage from seven years ago and made a really disturbing ‘Serafim’ video out of it.”

Vampire have premiered a new video for their new song “Rex.” This is the title track of the band’s new album, which will be released on June 19.

Black String said the following about the new song:

“In my opinion the song sums up the sound we’ve been digging further into the last five years or so.”

Hand Of Doom also added the following about the video:

“The video stresses the dark nature romanticism that has been part of Vampire ever since the first album. A major difference to the music videos Daniel Garptoft has made for Vampire previously is that there are no humans visible on screen. The closest you’ll get are biblical etchings, decapitated statues and a ghastly entity oozing up from the tombs. Together with the heroic and celebratory quality of the music it offers a new dimension to the Vampire experience, full of contrasts.”

Vampire have premiered a lyric video for their new song “Melek-Taus.” This track is from their new album “Rex,” which will be released on June 19. The group commented:

“’Melek-Taus’ is the first ‘real’ single released from Rex and it happens to be the final song on the album. It’s probably one of the most well-crafted Vampire songs we’ve made in every aspect. The lyrics for this one have a death defying, heroically reckless attitude. Listen and judge by yourselves!”

Vampire have shared a raw mix of their new song “Wiru Akka.” You can check that out below. The final version of the track will appear on the band’s upcoming album.

“The main ideas for ‘Wiru Akka’ came up after a glorious trip to Bergen, Norway two years ago when Hand of Doom and I went to see Master’s Hammer, Mayhem and a few other bands of historical importance. We decided to release ‘Wiru Akka’ as a preview from our upcoming third album as it carries the usual Vampire trademarks: skull-crushing rhythm guitars and relentless drumming topped by sinister harmonies and vocals. We want to make clear that this is a quite hasty mix of the song. We intend to make the final mix of the album more majestic and underworldly – to be released next year.”

“Again, the album was recorded at Nacksving Studios in central Gothenburg. And just like on ‘With Primeval Force’, the recording was split into two separate sessions with several months apart. We work like this in order to allow ourselves to see what direction the material is moving in, and to open up for a certain creative flexibility in the writing process. The lyrics for ‘Wiru Akka’ take the listener on a journey way up north to pay visit to a certain heathen idol of the Sami culture. Experienced Vampire listeners will perhaps recall the name being invoked in one of the songs on the first album. All in all, there are lots of new and exciting things under the Baevi sun, but a substantial part of what we do seems to remain unchanged.”

Vampire have premiered a new live video for their song “Knights Of The Burning Crypt.” This track is from the band’s latest album “With Primeval Force.” The group commented:

“The ‘Knights Of The Burning Crypt’ live video is a perfect ending of the With Primeval Force album cycle. The video was shot in Malmö last autumn on the mini-tour we did with At the Gates and Nifelheim. We’re honoured to have been part of such a legendary team of bands. After the final gigs in 2018, we’ve gotten around to record semi-professional demo takes of a couple of songs that have been in the works for about a year. We’re aiming for a first studio visit this spring to begin the “real” recording sessions for our third album. The new Vampire songs are partly a continuation of the more epic sides of With Primeval Force but there will be a lot of fast stuff, as well.”

Vampire have premiered a new video for their new song “He Who Speaks” This song is from their new album “With Primeval Force,” which will be released on April 21.

Vampire have premiered a new song titled “Ghoul Wind.” This song is from their new album “With Primeval Force,” which will be released on April 21.

Vampire have announced that they will be releasing their new album “With Primeval Force” on April 21. Check out the cover art below: 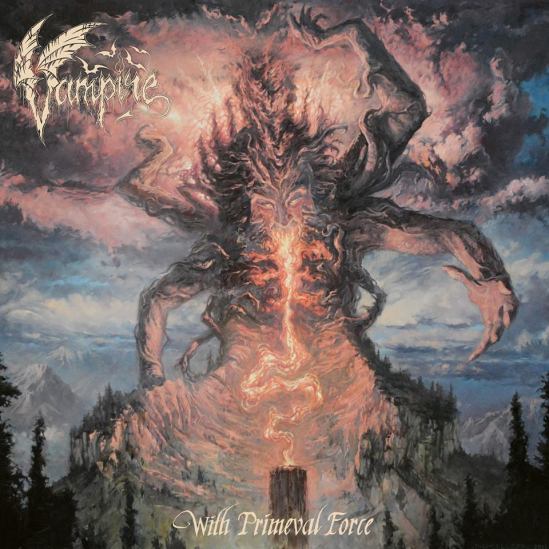 Vampire are streaming a rough mix of their new song “Skull Prayer.” The final version of the track will appear on the band’s upcoming new album.

1. “Pyre Of The Harvest Queen”
2. “Sleeper In The Deep” (instrumental)