The Acacia Strain have officially finished spelling out “Decay” with the release of their “Y” EP. The effort features two new songs, “One Thousand Painful Stings“ (feat. Spiritbox’s Courtney LaPlante) and “EARTH WILL BECOME DEATH,“ and it can be streamed below:

In other news, The Acacia Strain have also confirmed that their new album “Slow Decay” will be released July 24. A majority of the tracks from the record have already been released across the band’s recent EPs. Vincent Bennett said the following about that:

“The whole concept is reality breaking down around us. We’ve done our time on earth, broken through the boundaries of what reality actually is, and we’re now witnessing our collective descent into madness.

Lyrically and sonically, everything reflects that. You’re getting the vision piece by piece. The whole theme is a slow dive. By the same token, it organically becomes one record instead of just one big push out of the gate.

As soon as you think you’re getting the hang of it, we throw out a wrench with the full-length. There’s no evidence to suggest we’re aren’t actually in a living hell. The things happening around us could be out of a comic book or a movie.

The idea is, ‘This can’t be real.’ Maybe something happened. Maybe we’re all dead and we don’t even know it. Maybe we’re just living in some augmented reality hellscape of actual planet earth.” 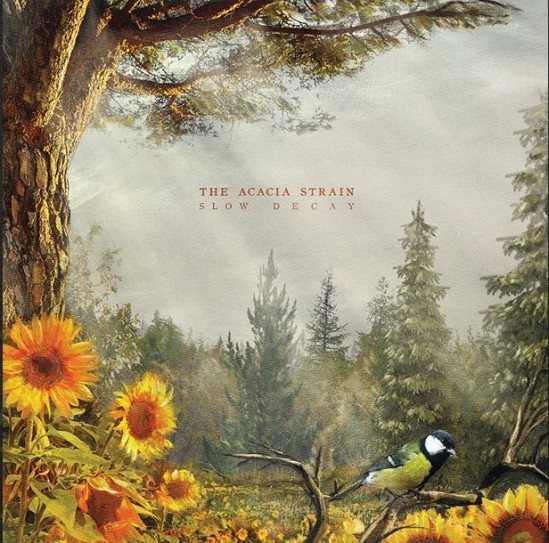 Various album bundles and a vinyl version of “Y” are available to pre-order HERE.

According to a recent product listing, The Acacia Strain will be releasing a new album titled “Slow Decay“ on July 17. Eight tracks have already been released across four EPs titled “D”, “E,” “C,” and “A.” It is assumed that a “Y” EP will also be released to finish spelling out “Decay.”

The Acacia Strain have released a new EP titled “A.“ The effort comes with two new songs including “Inverted Person” and “Chhinnamasta,“ You can stream those below and pre-order a 7” vinyl pressing of “A” HERE. Vincent Bennett said the following:

“‘Chhinnamasta’, goddess of contradictions. See us through this wave of uncertainly. Guide us into the future. Grant us the strength and knowledge we seek to grow, to change for the better; or allow us to proceed into the void. No guest vocals? No problem! Most of you have already figured out what we are spelling, no reason to ruin it for everyone else. Enjoy two more songs as we continue to stay apart while also trying to stay together. Some of these lyrics came to me in the studio, while some were sitting with me for a long time. I hope you enjoy what we have been doing — it’s not over yet!”

The Acacia Strain have released a new EP titled “C.“ The effort comes with two new songs including “Crossgates” and “I Breathed In The Smoke Deeply It Tasted Like Death And I Smiled“ (feat. Left Behind‘s Zach Hatfield). You can stream those below and pre-order a 7” vinyl pressing of “C” HERE. Vincent Bennett commented:

“This is my personal favorite set of two, but don’t let that sway your opinion. Short and sweet meets long and depressing — the perfect combination. Zach from Left Behind was the obvious choice for ‘I breathed….‘ He added so much to the song and I’m happy he was able to. We are living hell.”

The Acacia Strain have released a new EP titled “E.“ The effort comes with two new songs including “Solace And Serenity” and “The Lucid Dream“ (feat. Mortality Rate’s Jess Nyx). You can stream those below and pre-order a 7” vinyl pressing of “E” HERE. Vincent Bennett commented:

“I’ve been a fan of Jess since Judiciary introduced me to her voice, and I’m extremely happy to have her on a song. Solace, serenity — enter the lucid dream. The second chapter is here. We descend further and further into our own undoing.”

After The Acacia Strain cut their tour with Rotting Out, Creeping Death, Chamber, and Fuming Mouth short due to the coronavirus pandemic, the band booked a few new shows to help them get home. Unfortunately, the final two dates have now been cancelled as well. The band tweeted the following:

Due to recent bans and restrictions, ALL shows have been canceled. Refunds at point of purchase. We are all heading home. Thank you for your understanding and patience. Thank you to everyone in Anaheim and Vegas for coming out. Stay safe.

The Acacia Strain have been forced to cut their current tour with Rotting Out, Creeping Death, Chamber, and Fuming Mouth short due to the coronavirus pandemic. Despite this, the band will still be playing the following shows on the road home:

Hate to say it, but we are headed home. Booking a few small shows to get there. Please come if you can. If you’re sick, stay home. Love you all. Stay safe. Vegas, Denver, maybe one more to come. pic.twitter.com/XRgjEzauum

I love and respect every single band that was on this tour. Gutted we had to cut it short; watching them live gave me life. I’ll never forget any of this. Fuming mouth, chamber, creeping death, rotting out – forever.

The Acacia Strain have cancelled several dates on their North American tour with Rotting Out, Creeping Death, Chamber, and Fuming Mouth due to the coronavirus pandemic. The band commented:

“We are unfortunately forced to cancel our shows in Portland, Berkeley, and Los Angeles. Anaheim and all other shows are still on!” 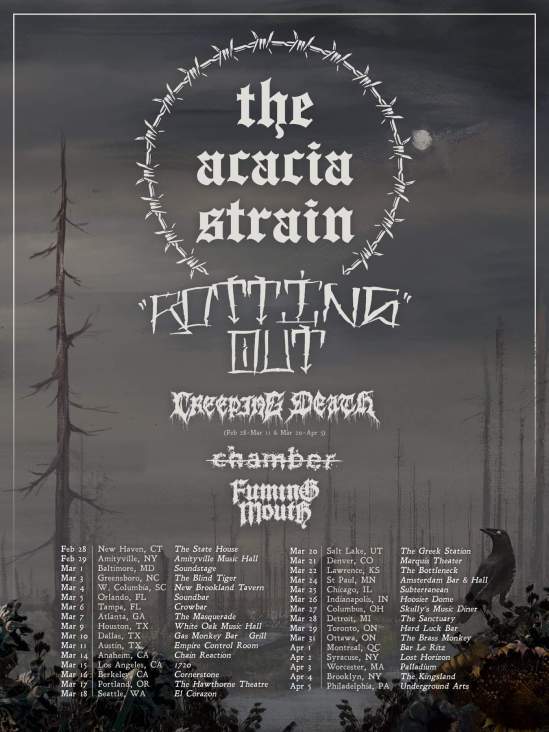 The Acacia Strain have cancelled their European/UK tour with Left Behind, Leeched and Mental Cruelty due to the coronavirus pandemic. The band commented: 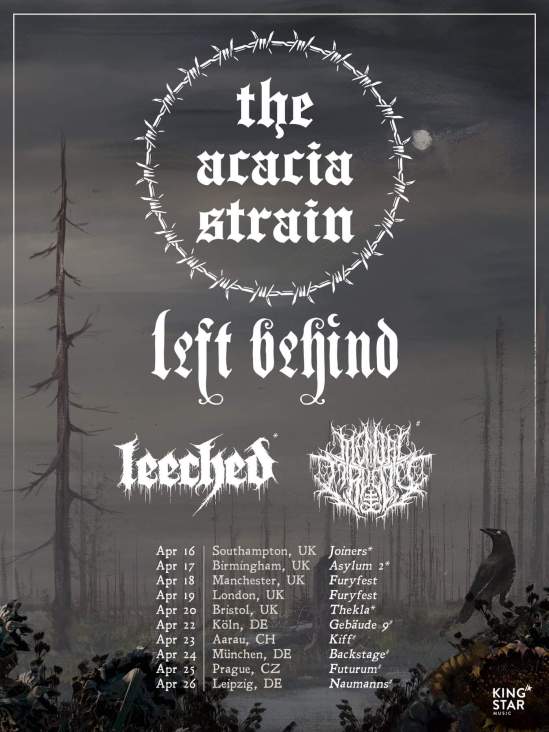 The Acacia Strain have released a new EP titled “D.“ The effort comes with two new songs including “Feed A Pigeon, Breed A Rat” and “Seeing God“ (feat. Jesus Piece’s Aaron Heard). You can stream those below and pre-order a 7” vinyl pressing of “D” HERE.