Terror are streaming their new album “Trapped In A World“ in full via Decibel. You can check that out HERE. As previously reported, the effort, which will officially be released on March 5, was tracked live in the studio with ex-guitarist Todd Jones (Nails) and it features re-recorded versions of songs from “Lowest Of The Low” and “One With The Underdogs.“

Terror have announced that they will be releasing a new album titled “Trapped In A World“ on March 5. The effort, which was tracked live in the studio with ex-guitarist Todd Jones (Nails), features re-recorded versions of songs from “Lowest Of The Low” and “One With The Underdogs.“

“Trapped In A World” Track Listing:

“As the world locked down and Terror went on a full pause with the pandemic hitting the USA hard, somehow this created a perfect opportunity with Nick, Todd, and myself to start writing Terror songs twenty years after we started this band. Of course, all the other members are involved in this process, but with travel restrictions and us being so spread-out location-wise, a lot of weekends the three of us were just getting in a room and creating new Terror songs and it’s been a pretty insane experience. Todd is a deep-thinking maniac that can write hardcore songs like no one I have seen before, and the three of us fell right back into our early mindset and the energy and aggression felt just like it did on day one.”

“Got together with the Terror Crew (in a creative sense), for the first time since recording ‘One With The Underdogs‘. The ideas, guitars, lyrics/vocals, songs came pouring out. Locked in with Nick and Scott as if it hasn’t been sixteen years since we played together. There’s no shortage of song writers in Terror and the stuff we’ve collectively come up with so far… I can’t stop listening to these tracks. Magic via musical chemistry. It’s our aim to deliver to you a visceral and explosive hardcore record and I really hope you enjoy it.”

The record’s first single, a re-recorded version of “Overcome,” can be found below:

Terror have released a new rarities EP titled “Sink To The Hell.” Fans can purchase the 7 inch HERE.

A press release offered more info on the tracks featured on the EP:

“I guess all this time off left Terror some time to dig into our past and find some gems that never really saw the light of day. WAR Records originally released each of these four tracks individually as very limited lathe cut seven-inches, we decided to put them all on one vinyl EP so everyone that wanted one would have that chance to get these songs.”

Terror will be celebrating the 10th anniversary of “Keepers Of The Faith” with a livestream concert on November 25. Dare will open and tickets can be found HERE.

Terror will be releasing a 10th anniversary vinyl edition of “Keepers Of The Faith” on October 2. The effort will feature reworked artwork, a four-page booklet, previously unseen photos, and more. Pre-orders can be found HERE.

“[‘Keepers Of The Faith‘] could very well be the most important record Terror has made in our 20 years. This was more than music. It was a movement. From the art, to the lyrics, to the songs and the all-around vibe surrounding this release. It was a super special time for Terror we won’t forget.”

“A lot has changed in 10 years but one thing that hasn’t is the life these songs and this album still have. This record brought so much energy and momentum to the band and we thank everyone who made KOTF such a special piece of Terror.”

Terror have released two limited edition lathe cut 7″ vinyl pressings featuring a “Live By The Code” b-side titled “The New Beginning” and a previously unreleased song titled “You Lost All Respect.“ They were available HERE, but have since sold out.

Terror have announced an April European tour. Cancer Bats and Dust Bolt will serve as support. 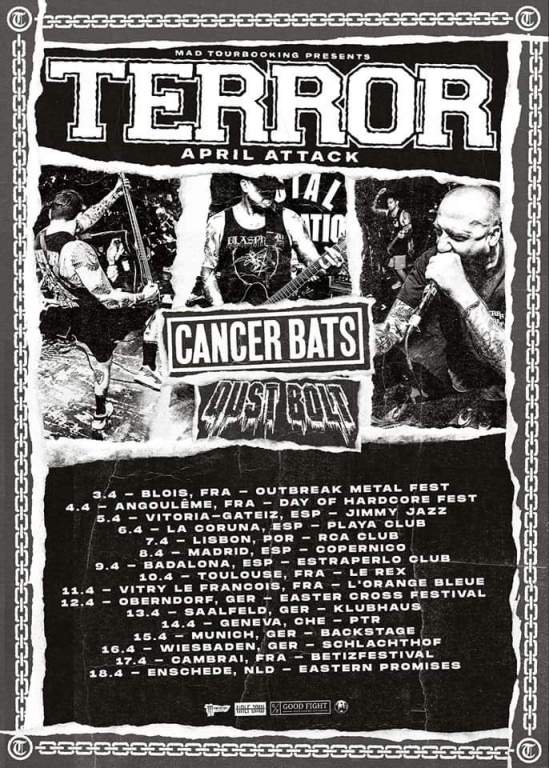 Terror have announced some West Coast shows with The Warriors, Creeping Death, and Dare. Here’s the dates:

Death Before Dishonor have been added to Terror’s fall European tour. The band will be replacing Cro-Mags JM, who were forced to cancel due to John Joseph requiring surgery for a hernia. As previously reported, Lion’s Law and Jesus Piece will also take part in the trek. 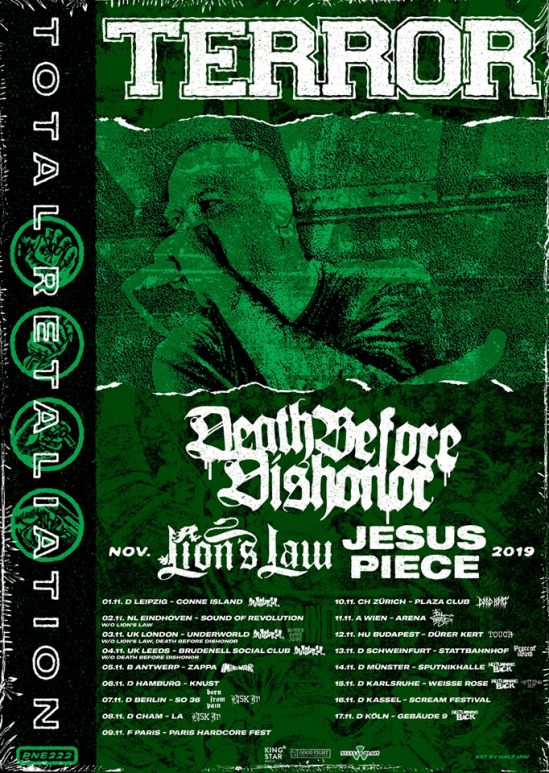