During a recent appearance on Hatebreed frontman Jamey Jasta‘s “The Jasta Show,” Sevendust drummer Morgan Rose opened up about the possibility of retirement. He says the group have been having discussions about their end and that they are “not gonna be around, full-fledged, forever.”

Morgan said the following when asked for an update on the band’s upcoming album:

“I go to Kansas on the 20th. We’re gonna finish up the writing for it then. I’ll be there for, like, a week — me and the rest of the guys are going to Kansas to rehearse and work on the rest of these songs. And then I think the 10th or the 11th of July, we move into the studio for six, seven or however many weeks it’ll take [to record the new album]. Finish that. And then we’re gonna do one more run of the ‘Animosity’ anniversary [dates], ’cause people seem to like it. So do one more run of that. And then that might be it for a little while. We’re not gonna tour the new record until next year at some point. There’s not gonna be many left, I’ll just tell you that. I’m gonna be the one to let all the cats out of the bag, but I can just tell you that we’re not gonna be around, full-fledged, forever, that’s for sure.”

He continued when asked about doing a “four-year farewell” tour “like Slayer”:

“There probably will be something like that. The funny thing is SLAYER is a legendary… They’re SLAYER, you know. But regardless, relatively speaking, we have such close relationships. I started thinking about it. I mean, we did discuss this — the band has discussed, like, when’s the end date? ‘Cause it’d be nice to do it on our own terms and it’d be nice to be able to say goodbye to everybody properly. And I got emotional when we were talking about it, ’cause I was, like, there are so many people that we’re friends and really consider very close that I don’t hang out with. You have these, for sure — people that you’ve met on the road that you see ’em wherever it might be and you’ve seen ’em so many times that you know them absolutely by name and maybe you even have a drink or food or something when you go through town, but you don’t hang with them other than that. And we’ve been [touring for] 26 years, and there’s a lot of those people. And it’s, like, shit, dude — that’s gonna be, like, ‘Bye.’ We don’t talk. We only talk when I come here. And we’ve been talking, for some of these people, for 25 years. And it’s, like, damn. There’s a lot of those people. And it fucked me up a little bit. I was, like, that’s gonna be interesting to wave the stage that night and be, like, ‘Damn,’ and fuck off forever. ‘Cause it obviously has been a gigantic part of our lives — more than half of it has been spent out on the road building those relationships. So it’ll be a trip.”

Rose also added the following when Jasta told him not to sign a contract saying that the band can’t do a reunion tour several years after their farewell run:

“We’re pretty fucking old to begin with. Somehow or another we’ve kept it together enough to be able to still do it at a respectable level. But it’s gonna happen. I would be lying to you if I told you I didn’t know when. It is gonna happen. But we’re not saying anything.”

“It never means that we’ll never play again. Anybody that says that, it’s, like, you’re insulting the intelligence of the public. I mean, look, MÖTLEY CRÜE is getting ready to go out [after previously saying they wouldn’t]. They said they burned the book… I don’t ever [say], ‘Never, never, never. I swear to God.’ … The plan is that we’ve done it long enough. The body has taken a fucking beating. I’ve personally been to the doctor six straight days. I’m going for am MRI tomorrow. It’s breaking down. I was in the gym, actually, right before we did this [podcast] just trying to do something to help [with my pain]. Twenty-six years of car accidents — that’s how you’ve gotta look at it. I asked my doctor, ‘Why is happening now? I’m in better shape now — way better than I was back then.’ I was a fucking mess back then. And he goes, ‘You’re a hundred years old, dude.’ [Laughs] I’m, like, ‘Fuck!’ Could I have done anything? He goes, ‘You could have avoided some car accidents.’ It’s 26 years of beatin’ the fuck out of yourself. It’s all good until it’s not. That was what he told me. He goes, ‘The body is all good until it’s not.’ … I’m going tomorrow to see what this deal is, ’cause it’s fucking debilitating.”

During a recent interview with Audio Ink Radio, Sevendust guitarist John Connolly offered an update on the band’s new album. According to him, the group are planning to enter the studio this summer.

“We’re in demo mode right now. We’re gonna hit the studio in the summer. So, yeah, we’re working up as many new demos as we can. We started working with LJ [singer Lajon Witherspoon] [to] get the vocal process going. But, yeah, probably [in] July, August, [we’ll] hit the studio.”

He also added the following about the musical direction of the new material:

“It’s hard to say. It’s sort of very all over the place, in typical SEVENDUST fashion, until we really start to hone in and figure out what’s gonna make it and what’s not. We’re realists at this point. We know all the early stuff that we work on in the demo stage is either gonna be the first single or it’s probably never gonna see the light of day. So some of these songs are just a stepping stone to get to something cooler. It’s always exciting when you’re at this part of the process, ’cause you just don’t know. Sometimes you’ve gotta take a step back and go, ‘Okay, maybe we should listen to some of the stuff that was a couple of months ago’ before you find those special moments. But with everyone sort of diving into the Dropboxes and kind of picking their favorites and stuff like that, I would imagine probably within the next six weeks we’ll have a lot more of a shape and a sound. But, yeah, the vibe is just a big question mark. It’s a big, wide-open canvas right now, which is good, ’cause we’ve got tons of ideas to fill it with, for sure.”

Sevendust have added more dates to their “Animosity“ 21st anniversary tour. As previously reported, Tetrarch and Dead Poet Society will open on the first leg of that trek. 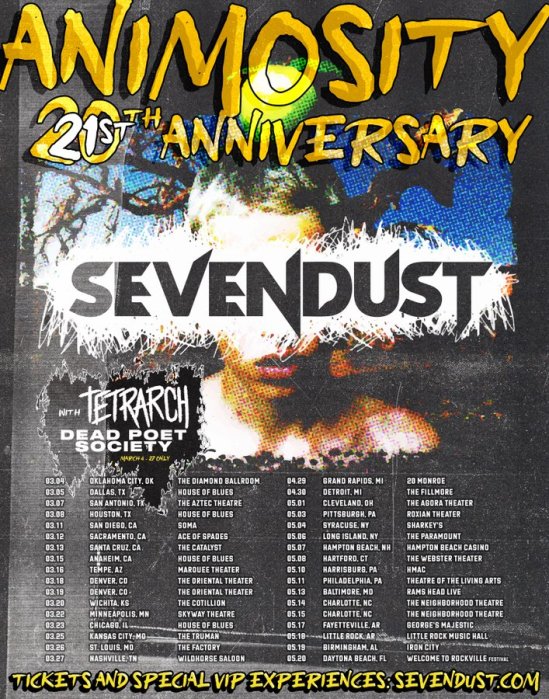 Sevendust have officially started the writing process for their next album. Guitarist Clint Lowery and frontman Lajon Witherspoon confirmed the news on Instagram.

“The first of what I hope to be many sessions with @ljspoon at his “Farmhouse studios”. Had a blast brother. We’re breaking the writing seal on what will be our next 7d record. So blessed after all these years to enjoy this process together. Some great ideas happening. Thanks Ash and rest of the fam for the hospitality. Felt like home the whole time. Looking forward to round two!! Being out in the country did me some good. Now we know what we have to do!!!! Y’all just wait!!”

Sevendust will be celebrating the 21st anniversary of “Animosity” on a March headlining tour. Tetrarch and Dead Poet Society will open. 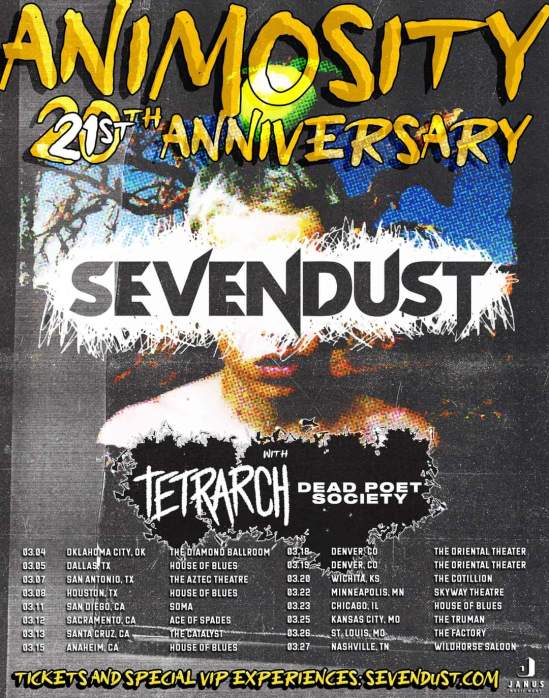 Sevendust have digitally released a new deluxe edition of their latest album “Blood & Stone.” The updated effort comes with several remixes and two new songs, “What You Are” and “All I Really Know.“ You can check out the new tracks below:

Sevendust have shared Justin Deblieck‘s remix of “What You’ve Become.” This track is from the digital deluxe edition of “Blood & Stone,“ which will be released on December 10. 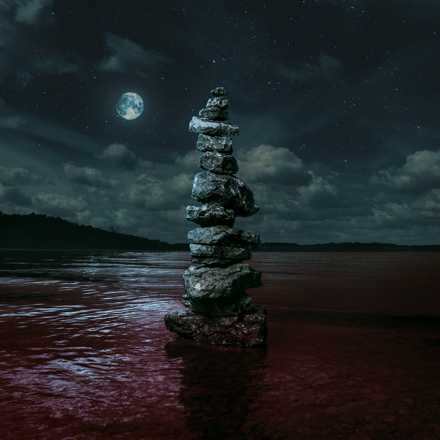 Sevendust will be digitally releasing a deluxe edition of their latest album “Blood & Stone“ on December 10. The effort will include two new songs and three remixes. You can pre-save that HERE.

Sevendust will be ringing in the new year with some special “Countdown To 2022” shows. Here’s the dates: 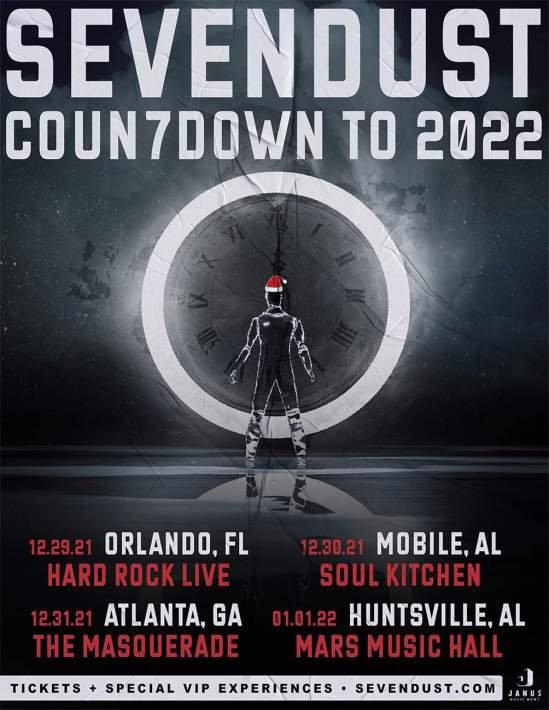 Steel Panther have postponed their Australian/New Zealand tour. The trek will now take place in October 2022 with Sevendust set to open on the Australian dates: 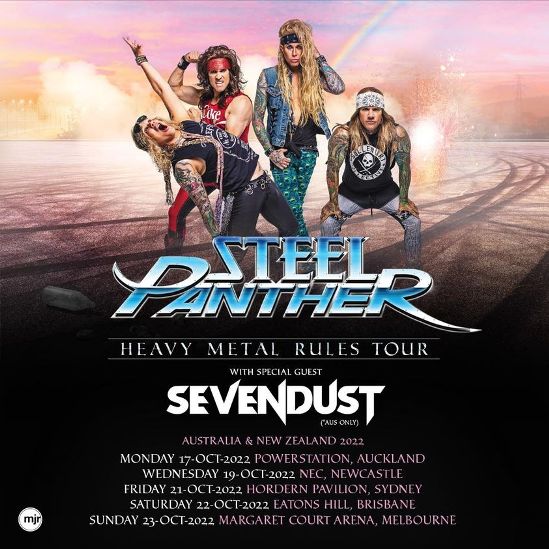