Gus G. (Firewind, ex-Ozzy Osbourne) has premiered a new video for his new song “Into The Unknown.” This track is from his new solo album “Quantum Leap,” which was officially released today (October 8).

Gus G. (Firewind, ex-Ozzy Osbourne) has premiered a new video for his new song “Enigma Of Life.” This track is from his new solo album “Quantum Leap,” which will be released on October 8.

Gus G. (Firewind, ex-Ozzy Osbourne) has revealed the details for his new solo album “Quantum Leap.” The instrumental effort will be released on October 8 and the cover art and track listing for it can be found below:

Gus said the following about the record in a new video message:

“It’s my first all-instrumental solo album. So this means there’s no vocals at all, no guest singers; it’s just me and my guitar. You’ve already heard a couple of the singles. The first one was called ‘Exosphere’; it came out in April. And the second one was called ‘Fierce’, which we made a pretty hilarious video for. I hope you checked it out. There’s gonna be a third single coming out at the end of August for another song, which is totally different; it’s not metal at all.

I’m really excited about this album. It was about time that I stepped up and did a full-on instrumental guitar album. A lot of people have been asking me and pushing me to do this. And to be honest, I always turned it down. But I think the recent situation with the pandemic and the fact that everybody, we all had to stay locked in in our houses and we went through months of quarantine and lockdown, that kind of sparked ideas and got me to… Music was my only gateway, basically, so that’s what I did; I just made songs. I couldn’t fly to another country and meet with other musicians and do pre-production or anything like that, so I just decided to write stuff on my own and just make a guitar album.

There’s a lot of cool stuff on there — different stuff. Obviously, my style is all over the place. I tried to push the envelope a little bit and explore some new things.”

He also discussed the other musicians he worked with:

“I have two amazing players with me on the record. One of them you already know. It’s Dennis Ward [PINK CREAM 69, UNISONIC]. Dennis has worked with me in the past. We’ve worked together the past five years, actually. We’ve done two FIREWIND albums together. He’s been co-producing and co-writing with me. And also my previous solo record, ‘Fearless’, he played bass and he sang. He’s a great singer. He’s a multi-talented guy. He mixed and mastered the record and also played bass on most of the songs. I played bass on a couple of the tracks. I also did the keyboards. And I also have a great drummer from England, [Jan-]Vincent Velazco. He’s great. He plays amazingly. You already heard him on the first two singles.”

He also added the following about the album’s title:

“I liked the title. It sounded nice. It was something different. ‘Quantum leap’ means when you’re taking a big step, so for me, making an instrumental album and letting my guitar do the talking was a big step for me, for once. I’ve always worked with singers and collaborated with many people, but this time, I decided to just let the guitar be a voice. So this was my quantum leap.”

Gus G. (Firewind, ex-Ozzy Osbourne) has premiered a new video for his new song “Fierce.” This track will appear on his upcoming solo instrumental album.

“Boo! Check out the video for my brand new single, ‘Fierce’! Don’t be scared, this is just a love story… I came up with the concept of a lonely rock star who eventually finds true love in the eyes of ‘Necromantissa’ — a girl he previously kept hostage in his dungeon. Music finally unites them and they live happily ever after and even form a metal band. Nightmare or reality?? We had tons of fun shooting this, getting in full makeup.

I love certain black metal & shock rock aesthetics & wanted to try something different, instead of doing yet another performance video. And I also wanted to make a video with my cats too.

Many thanks to Panagiotis Kountouras for the excellent directing once again, my immortal beloved & our cats Marquise and Leon.”

Gus G. (Firewind, ex-Ozzy Osbourne) has officially finished his new instrumental album. A new song from the effort, titled “Fierce,” will be released later this month. 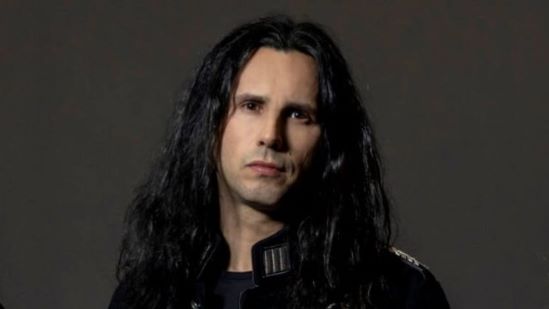 “If you guys noticed, I released a single [in early April]. It was the first single. It’s called ‘Exosphere‘. It’s part of the album. There’s gonna be more singles coming out. We’re planning to release them in different phases, and then I think sometime around this fall, we’re gonna drop the whole album. I guess it’s a new way of doing things — kind of like teasing the album with singles first and seeing how they perform and what people think and let people get used to it. Actually, there’s a new single coming out, I think, in June. Yeah, so that’s a few days from now. It’s gonna be called ‘Fierce’, and it’s a real metal track, I think. If you guys like my past instrumentals or stuff that FIREWIND has done, the fast stuff, you’re gonna like this. It’s a fast song. There’s a lot of shredding. And a really funny video. So I can’t wait for you to check it out. I’m not gonna say any more. But, yeah, it’ll be out in a few days, and you’ll see and hopefully you can tell me what you think.

The album is done. It’s finished — mixed and mastered. Dennis Ward [PINK CREAM 69, UNISONIC], he played bass on it and he mixed and mastered it. I have a new drummer who’s playing on it. His name is [Jan-]Vincent Velazco. He’s a great, killer drummer. He’s from England. And he contacted me last year online, and he said, ‘Hey, dude, if you need a drummer, let me know.’ And I checked him out, and I was blown away by his skills, by his playing. So I thought hey, why not? Why not collaborate with somebody new? At the time, Johan [Nunez] was not available to record. ‘Cause I was planning to ask Johan from FIREWIND to play. But he went back to school to finish a course, so I thought why not collaborate with Vincent? But, yeah, more on that later. I’m gonna be posting a bunch of stuff about the new album when the time comes.

I’m still not sure what to call the album, actually. I have an idea in mind; I have a title. But this is gonna be my first all-instrumental album, so there’s a lot of guitar on it, different things on it — not just metal stuff. There’s some more mellow, some bluesier things, but then, of course, there’s a lot of shredding too. And I’m looking forward to releasing it. It’s a big step for me.”

“When the pandemic hit in early 2020, all world touring plans for Firewind were canceled. I found myself stuck at home for a whole year and not knowing what the future will bring. I slowly started putting down new riffs and ideas on my computer and before I knew it, I already gathered enough material for a new album. With a new reality in front of me, I started developing the new solo project and this time I decided to let my guitar be the voice, instead of having a singer or special guests.

This led me to creating a bunch of new instrumental songs. ‘Exosphere‘ was one of the first ideas I put together. I went through many different versions and arrangements before I settled for the final one. The last addition to the song was incorporating some lower registered riffs, after I got my hands on a seven-string guitar for the first time last summer.

The goal was to add some new elements to my music while maintaining my sound and style that I’ve been known for. I’m really happy with the end results and I hope you enjoy the new music. Stay tuned for more to come in the near future!”

Gus G. (Firewind, ex-Ozzy Osbourne) will be releasing a new single titled “Exosphere” on April 1. The guitarist tweeted the following about that:

The new single drops April 1st on all digital platforms and features Dennis Ward on bass & Jan-Vincent Velazco on drums! You can pre-save the single here: https://t.co/Bpq4bAF0Hk

“Creating my own pickups was a dream come true. This wasn’t about making another signature piece of gear but rather than creating something new from scratch based in my 20-year-long experience touring and recording professionally. Being on a constant search for the perfect tone, I wanted to make the pickup that will be suitable not only for myself, but for any rock and metal player that is looking for solid, uncompromising tone.”

Gus G. (Firewind, ex-Ozzy Osbourne) has revealed that he is writing a new solo album. The guitarist said the following about that:

“Being on lockdown can be tough, but it has at least allowed me to work on a lot of new music. I’m officially writing a new solo album which looks like it’ll be all instrumental, but I’ve been writing music with and for other people as well. I guess that’s my meditation, my way of dealing with all the madness. Hope you’re all keeping safe. Have a good weekend 🤘🏻🤘🏻”

On April 17, Arch Enemy frontwoman Alissa White-Gluz and Firewind guitarist Gus G. took part in a livestream for the #TogetherAtHome series. The series, which is fueled by Global Citizen, was launched in support of the World Health Organization as everyone continues to face the ongoing coronavirus pandemic.