Disturbed have premiered a new live video for “Hold On To Memories.” This track is from the band’s latest album “Evolution.” David Draiman commented:

“The people who have left us, are never completely gone. They stay in our memory, and I encourage each and every one of you to live everyday of your lives like it’s the last day of your life, making memories that last forever with the people you care about and love. Shine your light on this world everyone. Make memories that will last forever and cut through the darkness.”

Disturbed performed their cover of Simon & Garfunkel’s “The Sound Of Silence” on “Conan” back on March 28, 2016 and the clip has gone on to surpass 100 million views on YouTube. According to Conan O’Brien, this is the first clip from his show to hit that milestone.

.@Disturbed's cover of "The Sound of Silence" is the first clip to crack 100 million views on my YouTube channel. I always knew that heavy metal band covers of Simon & Garfunkel songs would be my legacy. https://t.co/Gw4bzAMCFV

Disturbed‘s 2002 album “Believe” will be receiving a limited edition vinyl picture disc release on September 20. Pre-orders can be found HERE.

Disturbed is releasing Believe on a vinyl picture disc for the first time on September 20. Limited to 3,000 copies. You can pre-order your copy here: https://t.co/KzRwTDN0YA pic.twitter.com/59pHy1Y2os

According to Billboard, Disturbed have scored their seventh straight No. 1 on the “Mainstream Rock Songs” airplay chart with “No More.” That track appears on the band’s latest album “Evolution.”

Disturbed have shared a 360° live video for “Inside The Fire.” The clip was filmed during a show the band played at Alexandra Palace in London, England on May 11.

Disturbed were forced to cancel their show at Brandt Centre in Regina, SK earlier tonight (July 24) due to David Draiman’s “vocal issue.” The band commented:

“Disturbed Ones — We regret to inform our fans that we will have to cancel tonight’s show, Wednesday July 24 at Brandt Centre in Regina due to a vocal issue. At the recommendation of a doctor, David has been advised to rest and limit his vocal usage today to avoid any further damage. Tickets purchased online will be refunded automatically. Ticket holders that bought in person are eligible for a refund at their point of purchase.” 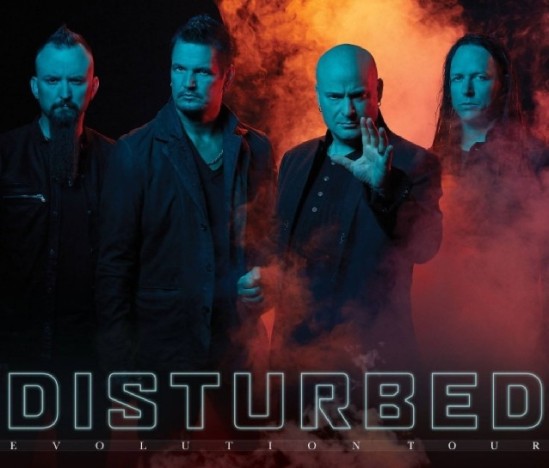 Disturbed have premiered a new video for “No More” off their latest album “Evolution.” You can check that out below. In other news, the band have also announced that they will be digitally releasing a new live EP titled “Live From Alexandra Palace, London” tomorrow (June 28). That effort was recorded during the group’s May 11 show at Alexandra Palace in London, England and it will feature the following tracks: “A Reason To Fight,” “Inside The Fire,” “No More,” “Ten Thousand Fists,” and “The Game.”