Bullet For My Valentine have teamed up with Lyme Bay Winery once again to create another band branded mead. The latest collaboration is a spiced mead called “Venom” and it can be purchased at bfmvmead.com. The following was said about the 10% ABV beverage:

“A second mead made especially for the popular rock band Bullet For My Valentine. This Mead is a honey ferment flavoured with spice, hints of cinnamon and nutmeg for a tingling sensation and a bite of heat. Very moreish.” 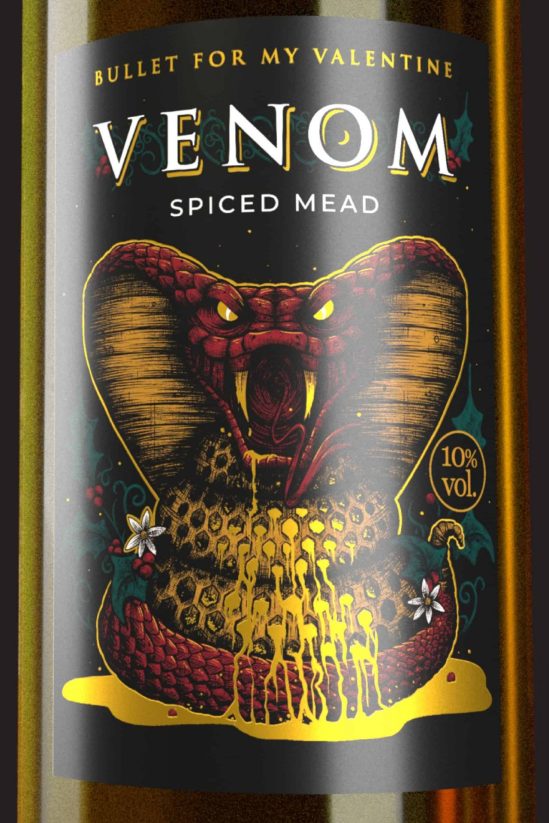 During a recent appearance on Bad Wolves guitarist Doc Coyle’s “The Ex-Man” podcast, Bullet For My Valentine guitarist Michael “Padge” Paget offered an update on the band’s new album. According to him, the new material is “the heaviest Bullet stuff you’ve ever heard.”

“We’re, I’d say, 85 percent [done] writing. We did a bunch last year. Obviously, we did fuck all this year. Matt [Tuck]’s been down the last few weeks, down at my place, up in the garage, in the studio, so we’ve been demoing. I think we’ve got about five or six in the last few weeks as well — four or five, maybe — to add to the list. There’s about 20 songs, but we’re weeding out the [best] ones [for the album].”

He also added the following about the musical direction:

“It’s heavy as fuck — it’s, like, the heaviest BULLET stuff you’ve ever heard, which is cool. Everyone’s vibing. [Matt is] cool. I’m cool. The [rest of the] boys are cool. It’s just we need to get out of this [pandemic] situation we’re in so that music carries on and we can put on shows again. Same as everybody else that’s in the same situation.”

During a recent interview with Rock Sound, Bullet For My Valentine’s Matt Tuck offered an update on the band’s upcoming album. According to him, the group have about seven songs demoed and the new material is “very heavy” and “very technical.”

“We’ve never had this much [material] at this stage pre-recording. There are seven [songs], I think, which are finished — in my eyes, anyways — vocals and everything, demoed up and ready to go. So it’s good. We’ve got a good head start. And then this [coronavirus pandemic] happened, and it’s kind of stopped the train. So it’s not ideal, and we did have a lot of plans for the rest of the year for writing and making the record, which are on the backburner now until further notice. It’s not the end of the world, but we’re really glad now that we took the time last year and the beginning of this year to write and record a demo rather than just sit on our asses, like we are being forced to right now.”

“Looking back at the last year, and then taking the decision to take this year off to write and record, take our time, don’t rush anything, was the best decision the band could have made. ‘Cause we don’t have any of the touring headaches that a lot of bands have that obviously had festivals booked this year and touring schedules, and it’s just stopped all of that. So we’re lucky in the sense that we don’t any of that going on, but it’s still kind of spoiling the flow factor that we had six weeks ago when things were on fire again and we kind of have to put the brakes on for a bit. But it’s okay — we’ll be fine. We weren’t scheduled to start making the record till September at the earliest anyway. So we’ll just see this out and do some writing in the meantime.”

He continued after being asked about the musical direction:

“It’s pretty brutal, to be honest. It couldn’t be more of a contrast with ‘Gravity’ in a ferocious style. It’s very technical. I don’t know why. You’ve just gotta go with what you wanna go with — as a band, as a musician, as a songwriter, you’ve just gotta go with what’s floating your boat, and this time around, the heavy stuff is just coming out in masses. The riffs are crushing. There’s probably 60 percent aggressive vocals, 40 [percent] clean, which is a ratio we’ve never really dabbled with before. It’s very heavy, it’s very technical. For the BULLET fans out there that kind of like that side of this band, it’s very cool and very exciting. It feels good.”

“It’s just good to have him onboard during the writing process. We have got plans to work with other people later in the year, and that was all kind of ready to go, but we’re not sure where we stand with that now because of schedules and [the coronavirus-related delays] having a knock-off effect and [us] not being able to start probably till 2021 now. We just don’t know if we wanna wait that long. So we may have to kind of let that go, which is a real shame. I don’t wanna say anything just yet, in case it still does happen. As it stands, we’ve just been demoing and writing, and that’s me and the band and with our friend Carl Bown.”

Bullet For My Valentine have teamed up with Lyme Bay Winery to create “Waking The Demon” honey mead. You can purchase that at wakingthedemon.co.uk. Here’s a description of the beverage:

“Waking the Demon Honey Mead is a ferment of honey, water and spices to create a smooth, rich drink which can be enjoyed on its own or mixed as a base for cocktails. A rich honey flavour with balanced acidity, honeyed notes and a backing of gentle spice. Like the Demon, there is hidden strength here (14.5% ABV) and not to be toyed with!”

Bullet For My Valentine have premiered a new video their song “Piece Of Me.“ This track is from the band’s latest album “Gravity.”

During a recent interview with Rock Sound, Bullet For My Valentine’s Matt Tuck revealed that the band have already written “eight new tracks” for their next album. The group are not planning to release the effort until 2021, but the frontman did say “all signs are currently pointing towards a far more aggressive, gnarly, riff-based record.”

Tuck said the following when asked if the band have been writing material for the follow-up to “Gravity”:

“Absolutely – a bit of an exclusive – we’ve already got eight new tracks. So we’ve been busy behind the scenes when we’ve not been touring over the last few months. It feels really good. ‘Gravity’, like I said – it wasn’t the gameplan at the time, but when we were making it we thought the process behind it was like ‘well if we do do a record like this, the next one – forward thinking – it just opens the door to do whatever we want again’. And instantly it has. All indicators are pointing towards ferocious heaviness.”

“So I don’t know – maybe it was just something that we needed to get out of our system, and come back to the more traditional way of writing a Bullet record. All signs are currently pointing towards a far more aggressive, gnarly, riff-based record.”

He also added the following about release plans:

“We’ve just been having a chat in the dressing room now with a few people, and we’re probably going to aim for a ’21 release. We want to take our time on this. And we want to work with people that we really wanna work with, and we may have to wait depending on their schedules. But we think ’21 is a safe bet, to give us the time to do what we want, how we want to do it, and not be rushed or forced into anything.”

During a recent interview with Metalshop TV, Matt Tuck confirmed that Bullet For My Valentine have already “written a couple of songs” for their next release. He said the following about the new material:

“I think early signs are pointing in the direction of kind of a dirty love child of ‘Venom’ and ‘Gravity’. We’ve written a couple of songs already, so it’s taking the best bits of those two and kind of smashing them together. So far, people are quite excited about it.”

Bullet For My Valentine have announced some August European shows. Here’s the dates:

Bullet For My Valentine have announced a headlining European/Russian tour. You can find the dates for that run below.

Bullet For My Valentine have premiered a new video their song “Not Dead Yet.“ This track is featured on the band’s latest album “Gravity.” A deluxe edition of that effort will be released on October 26. Matt Tuck commented:

“We shot our latest video for ‘Not Dead Yet‘ in Japan after our Summersonic 2018 performances. We’ve never done a video there before so thought, ‘why not?!’ Visually it’s stunning thanks to the amazing work by Japanese filmmakers Maxilla. We love this track and can’t wait for you all to see the new video.”