Bodom After Midnight (ex-Children Of Bodom, etc.) have officially released their new EP “Paint The Sky With Blood.” The effort features three songs including the title track, “Payback’s A Bitch,” and a cover of Dissection’s “Where Dead Angels Lie.” You can check out those tracks below. The EP serves as the band’s first and last release to feature late frontman Alexi Laiho.

Bodom After Midnight (ex-Children Of Bodom, etc.) have premiered a new video for the title track of their new EP “Paint The Sky With Blood.” That effort will be available on April 23 and it will be the band’s first and last release to feature late frontman Alexi Laiho. The group commented:

“Like ourselves, Alexi was beyond stoked about these songs and anxious to get these out, so we are happy that we can fulfill his wish. Needless to say, we are honored and proud to be a part of his very last creative work and to unleash it the way he wanted it. It’s time to let the beast out of the cage one more time as a celebration of Alexi’s music, legacy and the man himself.”

As previously reported, Kimberly Goss recently revealed that late Children Of Bodom and Bodom After Midnight frontman Alexi Laiho died as a result of “alcohol-induced degeneration of the liver and pancreas connective tissue” and that he “had a cocktail of painkillers, opioids and insomnia medication in his system.” She was able to obtain the information due to the fact that she was the musician’s legal widow, since they never officially divorced after getting married in 2002. Now, Laiho’s widow Kelli Wright-Laiho and his sister have both called out Goss for sharing the private information.

“I confirm that my brother broke up with Kimberly Goss decades ago and he had several valid reasons to do so (I will not go through the details here). Their so-called ‘close friendship’ after breaking up exists only inside Kimberly´s mentally unstable head and everyone who knows Aleksi is well aware of that. This ‘friendship’ was totally unilateral. My brother never, not even once, said ANYTHING positive to me about Kimberly. Someone might wonder why Aleksi was still married to her if he hated her so much. The reason is very simple, it was because Kimberly threatened him to take 50% of his money if he divorces her. Leaving marriage valid was not the best decision, but he was clever enough to make a will, excluding Kimberly of his inheritance. Everything will go to our parents.

What is to be noticed is that Kimberly Goss currently prevents our family from burying Aleksi’s ashes and the situation has been this ever since the funeral took place on 28.1.2021. You see, this is how Kimberly Goss uses her legal rights as a widow, preventing griefing mother and father bury their own son. Her selfish and narcissistic explanation is that she wanted to take part in the funeral and still wants to be present when the ashes are buried. But our family does not want this monster anywhere near us. And last but not the least, publishing the details of Aleksi’s death is something Kimberly did against our family’s will and without our consent. I believe Aleksi would not wanted that either since he always wanted to keep his private life out of publicity. Our family’s opinion about publishing the details of the death was told to Kimberly very clearly and knowing this, she decided to do that.”

“Alexi’s phenomenal big sister sets the record straight after the disgusting release of Alexi’s private medical records 🤬🔥. So fucking proud to be apart [sic] of this family!!!”

Goss has since responded as well:

“I don’t know what to do. I’ll be damned if I do and damned if I don’t. I feel as though my hand is being forced by people who are spreading unthinkable lies about me. Lies that have resulted in me receiving gruesome threats of death/rape/ torture by fans who believe these falsehoods.

Lies that I’m a ‘gold-digger’ who Alexi ‘hated’. This can be easily disproven through the beautiful text and video messages he sent me daily, right until the last day of his life. Messages so sweet, yet so heartbreaking at the same time. Heartbreaking because you can see how ill he was. I tried everything I could to help him. I often messaged people in Helsinki to check in on him because I was so worried.

I’m only human and I’m nearing my breaking point. I feel desperate to clear my name, but I know the only way to do so definitively would be to release his beautiful video messages to me. His closest friends in Helsinki have seen these, but that’s apparently not enough to stop this slandering by a few delusional people. These messages are private, not meant for the world to see. I don’t want to release them, but more importantly, I don’t want to fear for my life every time I go outside. I take these threats very seriously. While most are empty, history has taught us that some fans are crazy enough to follow through. Dimebag was murdered by a fan who thought he was the reason Pantera broke up.

So do I let the people taunting me, win? My limits are being tested. I don’t want to stoop to their level, but how else do I get these threats to stop? The timeline of events clearly show that I’m not the one who started this public feud, but I have an obligation to defend myself against threats. It was HIS choice not to divorce me. Facts just seem to evade to certain people. I’m so broken.”

Alexi Laiho’s cause of death has now been revealed. The late Children Of Bodom and Bodom After Midnight frontman died as a result of “alcohol-induced degeneration of the liver and pancreas connective tissue.” He was also said to have “had a cocktail of painkillers, opioids and insomnia medication in his system.” The news was confirmed by Kimberly Goss, who married Laiho in 2002 and never officially divorced him.

“This morning I received the final forensic report with the official cause of Alexi’s passing. As his legal widow, I am privy to this information. The certificate reads in Finnish, “Alkoholin aiheuttama maksan rasvarappeutuminen ja haiman sidekudostuminen”. The English translation is, “Alcohol-induced degeneration of the liver and pancreas connective tissue”. Furthermore, he had a cocktail of painkillers, opioids and insomnia medication in his system.

The loss of this extraordinarily talented and beautiful soul is a tragedy that was entirely preventable. He had so many good years left in him. Imagine all the amazing music we could still be getting if he had just accepted help. I plead with anyone who is struggling with alcoholism or any other substance abuse problem, to please seek support. You do not have to meet this same fate. If people are trying to help you, remember that they are doing it out of love and concern, so please do not push them away. Please do not surround yourself with enablers who promote your addictions. Let this be a cautionary tale that no one is invincible.

I do not want his death to be in vain. My hope is to eventually start a memorial foundation or charity in his native, Finland to help others struggling with these same demons. This needs to be an open conversation, not a source of shame. We are all human, we all suffer, but help is out there. If his story can save even ONE life, then something good can come out of this horrible loss we have all endured.

Bodom After Midnight (ex-Children Of Bodom, etc.) have announced that their new EP “Paint The Sky With Blood” will be released on April 23. The effort will be the band’s first and last to feature late frontman Alexi Laiho. Here’s the track listing:

“Like ourselves, Alexi was beyond stoked about these songs and anxious to get these out so we are happy that we can fulfill his wish. Needless to say that we are honored and proud to be a part of his very last creative work and unleash it the way he wanted it to. It’s time to let the beast out of the cage one more time as a celebration of Alexi’s music, legacy and the man himself.” 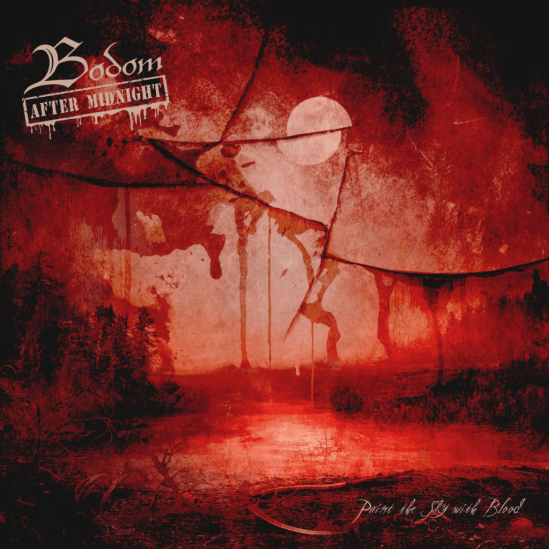 Bodom After Midnight and former Children Of Bodom vocalist/guitarist Alexi Laiho has sadly passed away at the age of 41. The musician died at his home in Finland last week after previously battling long-term health issues.

“We are crushed by the sudden passing of our dear friend and band member. Words cannot describe this shock and the profound sadness that we feel.”

“We are all absolutely shocked and devastated. We ask for privacy and understanding during these hard times. My little brother’s funeral will take place privately.”

“Alexi was the most loving and magnificent husband and father. Our hearts are eternally broken.”

“One of the most renowned guitarists in the world, Alexi Laiho, has passed away. The musician, most notably known as the front man of Children of Bodom, died in his home in Helsinki, Finland, last week. Laiho had suffered from long-term health issues during his last years.

More than 25 years of friendship. We lost a brother. The world lost a phenomenal song writer and one of the greatest guitarists of all time. Memories and Alexi’s music will live forever.

Our thoughts are with Alexi’s family during this difficult time.

Bodom After Midnight, the band featuring Alexi Laiho (ex-Children Of Bodom), Daniel Freyberg (ex-Children Of Bodom), Waltteri Väyrynen (Paradise Lost) and Mitja Toivonen (ex-Santa Cruz), have signed a new deal with Napalm Records for all territories excluding Japan. The group’s new album is expected to be released through the label in late 2021.

“We are far beyond thrilled to start working with Napalm Records. We feel that they can provide the best possible temple for a boulder called Bodom After Midnight to roll over all the archeologists who claim that metal music is on the brink of extinction.

Since the world is more or less in a standstill state right now, we are spending all the time we’d normally spend on the road making new music. Our new family at Napalm is giving us the liberty to make music that you can bang your head to very soon.”

“Welcome Bodom After Midnight. I have been following the career of Alexi Laiho since the first Children Of Bodom albums and have always been a huge fan. It’s needless to say that we are delighted to finally work with such a talent and we cannot wait for the first bits of music to be unleashed to the metal world. This will be BIG!”

“As most of our gigs and touring plans for 2020 got canceled, meanwhile we’ve been working hard on our upcoming full-length album that’s supposed to see the light of the day in late 2021. To make the wait a little easier, we want to give a treat to our fans and announce that we’ve just finished the recordings for two brand new bone-crushing and neck-breaking Bodom After Midnight songs! Needless to say, we’re absolutely thrilled about this and we can guarantee there’s killer stuff coming up your way! Cheers and stay tuned for more info!”

A post shared by Bodom After Midnight (@bodomaftermidnightofficial) on Nov 9, 2020 at 10:50am PST

A post shared by Bodom After Midnight (@bodomaftermidnightofficial) on Nov 10, 2020 at 8:36am PST

Bodom After Midnight, the band featuring Alexi Laiho (ex-Children Of Bodom), Daniel Freyberg (ex-Children Of Bodom), Waltteri Väyrynen (Paradise Lost) and Mitja Toivonen (ex-Santa Cruz), played their first concert at the Rytmikorjaamo in Seinäjoki, Finland last night (October 23). You can find footage and the setlist from that show below: