The Roadburn Festival has officially been rescheduled after previously being postponed due to the coronavirus pandemic. That event will now take place on April 15-18, 2021 in Tilburg, NET.

Firstly, we want to apologise for the lack of communication – we know you have questions and we’re doing our absolute best to get answers to you as soon as possible.

The next edition of Roadburn will take place 15-18 April, 2021. Tickets purchased for the 2020 edition will remain valid – you do not need to do anything at this time, just hold on to those tickets and show up next April. Our aim is to preserve as much of the line up as possible – we will be talking to bands over the coming weeks to re-confirm bookings, but things are looking positive on that front.

Tickets for the campsite and the night busses (i.e anything you bought direct, via 013.nl, Roadburn.com and Ticketmaster.nl) are also automatically transferred to April 2021 too.

We request just a little bit more patience for more detailed information. We know uncertainty is stressful, so we are working diligently to get you accurate information as quickly as possible, however, Roadburn is part of a complex industry that is in turmoil at the moment.

We are part of a huge group of organisations, venues and others who are awaiting guidance from the Dutch government as to how to proceed. These circumstances are unprecedented in a legal, financial and logistical sense for the whole entertainment industry.

As we said previously, this has been a heartbreaking decision for us, taken in the middle of some of the most uncertain times that the live music industry has seen. What we have put in place here is designed to protect and preserve Roadburn as a festival and ensure our ability to function going forward.

Whilst the rush to buy tickets on the day they go on sale has become a rite of passage for many, knowing that you’ve already got next year’s ticket in your pocket is hopefully a small silver lining!

The 2020 Roadburn Festival has been postponed due to the coronavirus pandemic. That event was originally set to take place on April 16-19 in Tilburg, NET.

“Due to the recent announcements from the Dutch government that all events in the Netherlands are forbidden until June, it will be impossible for us to hold Roadburn in April as planned. We know that many of you had already guessed that this would be the case, and we appreciate your patience as we have navigated the necessary processes that come along with organising an event as complex as Roadburn.

The current situation is having an enormous impact already – on the venues we rely on, the bands that we love and the events that we have planned for. Until we come out the other side of this, it will be impossible to do a full assessment of the damage caused to the live music industry.

We ask for just a little bit more patience from you whilst we continue to work to bring you the most clear, concise and useful information relating to the postponement of Roadburn 2020. We know you have a lot of questions and we will do our best to answer in the coming days.

With much love, sadness and disbelief…

A number of artists have been added to the 2020 Roadburn Festival including: Red Sparowes, Miserable, NGHTCRWLR, Cloud Rat, Russian Circles, Warhorse, Brutus, Hante., Rorcal, Alber Jupiter, Die Wilde Jagd, and Dead Neanderthals. The event will take place on April 16-19 in Tilburg, NET and it will be curated by Emma Ruth Rundle and James Kent (Perturbator), who both have special sets planned. Full Of Hell and Lingua Ignota will also be playing special sets as the artists in residence. Hide, Boy Harsher, HEALTH, She Past Away, and more will perform as well.

Full Of Hell and Lingua Ignota have been confirmed as the artists in residence at the 2020 Roadburn Festival. That event is set to take place on April 16-19 in Tilburg, NET.

Full Of Hell be playing four sets including a collaborative set with Lingua Ignota, a “Weeping Choir” set, a “Trumpeting Ecstasy“ set, and a set featuring material from “Roots Of Earth Are Consuming My Home” and their first 7 inch releases.

Lingua Ignota will be playing the aforementioned set with Full Of Hell, as well as a covers set, an “All Bitches Die” set, and a set featuring a “grand re-imagining” of “Caligula.”

In other news, curators Emma Ruth Rundle and James Kent (Perturbator) have booked some artists for the event, with Rundle having recruited Hide and Kent having recruited Boy Harsher, HEALTH, and She Past Away. A number of other artists have also been added to the festival including: Dool, Bada, and Acid Rooster.

As previously reported, the festival will be commissioning original pieces of music with Perturbator and Cult of Luna’s Johannes Persson set to collaborate. Jo Quail will also be collaborating with the New Trombone Collective as well. Furthermore, Vile Creature and Bismuth are working on a piece called “A Hymn of Loss and Hope” and Julie Christmas is planning to debut new material with a backing band featuring Laura Pleasants (ex-Kylesa) and Persson.

Emma Ruth Rundle and James Kent (Perturbator) will be serving as curators at the 2020 Roadburn Festival. That event will take place on April 16-19 in Tilburg, NET. In other news, the festival will be commissioning original pieces of music with Perturbator and Cult of Luna’s Johannes Persson set to collaborate. Jo Quail will also be collaborating with the New Trombone Collective as well. Furthermore, Vile Creature and Bismuth are working on a piece called “A Hymn of Loss and Hope” and Julie Christmas is panning to debut new material with a backing band featuring Laura Pleasants (ex-Kylesa) and Persson.

Triptykon will be performing a special orchestral set with the Dutch Metropole Orkes at the 2019 Roadburn Festival, which is set to take place on April 11-14 at 013 in Tilburg, NET. The performance will see Tom Gabriel Fischer running through a Celtic Frost/Triptykon three-part “Requiem.” Part one is “Rex Irae” off Celtic Frost’s “Into The Pandemonium,” while part three is “Winter” off Celtic Frost’s “Monotheist.” Part two is “Grave Eternal,” which was left unfinished until now. Fischer commented:

“The three parts of the Requiem will be performed by Triptykon at Roadburn 2019, with full classical orchestration, congregated specifically for this occasion by Florian Magnus Maier, who is our esteemed classical collaborator and arranger in this project, and whose patience with me appears to be limitless. We feel very proud and deeply honoured to be joined in this endeavour by the renowned Dutch Metropole Orkest.” 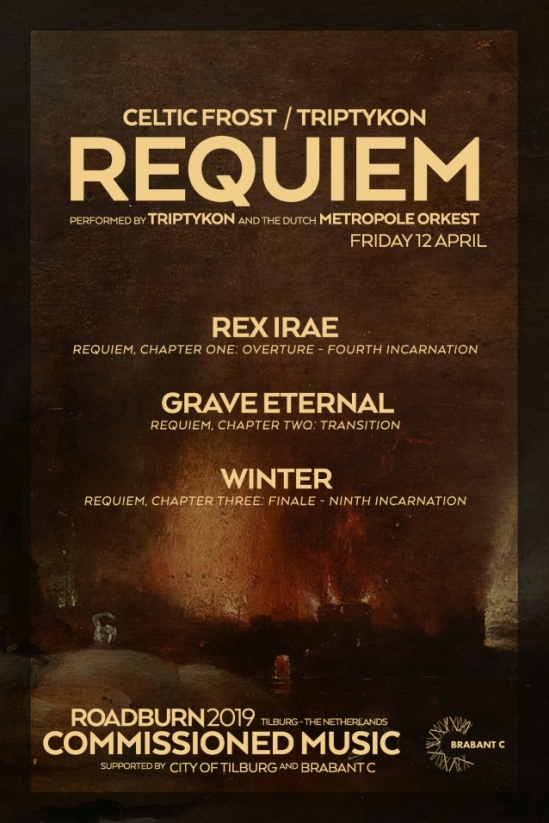 Cave In‘s Stephen Brodsky and Adam McGrath paid tribute to the late Caleb Scofield with a special performance at the Roadburn Festival in Tilburg, NET on April 21, and now that set will be released on November 30. You can check out a stream of “Youth Overrided” from the show below and pre-order the release HERE.

During a recent interview with Metal Hammer, Matt Pike revealed that Sleep were actually offered a chance to perform at Coachella next year and that they ended up turning it down. The band made their decision because they wanted to be free to perform at the Roadburn Festival in The Netherlands, which is being held on April 11 – 14, the same time as Coachella’s first weekend (April 12 – 14).

“We love that festival [Roadburn] and we love Walter [Hoeijmakers] who puts the festival on. We sorted it so far in advance that, at present, that’s the only thing that we have planned for next year. We aren’t even booked anywhere so far, so there’s lots of scheduling that we need to do… but we actually turned down Coachella because of Roadburn!

“Coachella actually pays more, but fuck that, we want to do Roadburn! I see Coachella as a new kind of Lollapalooza, and it’s an odd thing for us to be involved in – although it would have been good press, I guess. There’s actually this clause for it that says you can’t play anywhere else for six months after it – so fuck that! I’ll make more money if I don’t play it and I’ll be happier at Roadburn!

“It’s special, and it’s always been special; the people that go there, the people who put it on, it’s very real. I go there and just wander around and make sure I try and see every band there that I want to see, and believe you me, there are always a lot of them!”

More artists have been added to the 2019 Roadburn Festival. The event will take place on April 11-14 at 013 in Tilburg, Netherlands and the newly announced acts include Cave In, Old Man Gloom (feat. Cave In‘s Stephen Brodsky), Thou (“artist in residence” performing four sets including a collaborative set, a covers set, an acoustic set. and a “Magus” era set), Daughters, Henrik Palm, Drab Majesty, Ulcerate, Imperial Triumphant, Mord’A’Stigmata, Wolvennest, Gold, and Messa. Previously announced acts include: Sleep (performing “Holy Mountain” set and “The Sciences” set), Birds In Row, Gore, Have A Nice Life, Heilung, Louise Lemón, Midnight, Seven That Spells, and Vile Creature. As previously reported, Tomas Lindberg (At The Gates) will be serving as a curator at the festival. On another note, the special set Cave In’s Stephen Brodsky and Adam McGrath played for the late Caleb Scofield at this year’s Roadburn Festival will be released on November 30 and proceeds will go towards the Caleb Scofield Memorial Fund.

Sleep will be headlining the 2019 Roadburn Festival, which is set to take place on April 11-14 at 013 in Tilburg, Netherlands. The band are planning two career spanning sets on April 13-14, including one focusing on “Holy Mountain” and another one focusing on “The Sciences.“ Aside from them, the event will also feature Birds In Row, Gore, Have A Nice Life, Heilung, Louise Lemón, Midnight, Seven That Spells, and Vile Creature. Furthermore, At The Gates’ Tomas Lindberg has been confirmed as the curator and the bands he chooses will perform on April 12-13 under the name “The Burning Darkness.”

“There really are no words that can describe just how excited I am about this! To be asked to curate Roadburn in 2019 is an incredible honor. I have been at the last three editions of Roadburn, and it is by far my favorite musical happening every year. It is here I finally get to see bands live that have been on my radar for a while, and it is here that I – without fail – discover new music.

Just because of my involvement with At The Gates, Roadburn 2019 isn’t going to turn into a death metal festival, however there will definitely be a renewed focus on darkness and extremity – in every form.

I know curating a part of the Roadburn festival is a huge responsibility; one that I take deeply seriously. I am aiming to stay true to the Roadburn tradition of bringing a mix of exciting favourites mixed with a lot of new, challenging artists to the festival. Roadburn for me has always been about eclecticism, and underground music of all styles that desperately demand your attention. Walter and I have already started talking about possibilities, and I am super excited about the direction of these talks. See you there!”