I have crafted my Top 10 Album list for 2016. You can check that out below. This is just for fun, and I know I left out a lot, but these are all good albums that I enjoyed this year.

10. The Pretty Reckless – “Who You Selling For”

The Pretty Reckless made an impact the rock world with their sophomore effort “Going To Hell” and “Who You Selling For” is no exception. The effort has a classic, bluesy rock style with amazing vocals courtesy of Taylor Momsen. Highlights from this one include the instant classic “Take Me Down,” Oh My God,” and “Back To The River.”

Lacuna Coil recorded one of their heaviest releases yet with “Delirium.” The effort recalls the band’s early days while bringing in a few elements from their later work. The guitar work really stands out, due to the multiple guests including Myles Kennedy (Slash, Alter Bridge), Diego Cavallotti (Neptune’s Rage) and Mark Vollelunga (Nothing More), and Cristina Scabbia’s and Andrea Ferro’s vocals are as dynamic as ever. Highlights from this one include “Downfall,” “You Love Me ‘Cause I Hate You,” and “The House Of Shame.”

Korn definitely returned to form with “The Serenity Of Suffering.” It is a really catchy effort that has the spirit of the band’s earlier work such as “Take A Look In The Mirror.” Highlights from this one include “When You’re Not There,” “A Different World,” feat. Corey Taylor (Slipknot, Stone Sour) “Black Is The Soul” and “Everything Falls Apart.”

Megadeth’s latest effort was definitely a force to be reckoned with. It is one of the band’s best releases. It is full of political based lyrics over top notch musicianship ranging from Dave Mustaine’s and Kiko Loureiro’s masterful guitar work to Chris Adler’s (Lamb Of God) thunderous drumming. Highlights from this one include “Poisonous Shadows,” “Post-American World,” and “Dystopia.”

Southern rockers Black Stone Cherry have done it once again. They recorded a hard hitting album that went back to their roots with a little bit of a heavier vibe. Highlights from this one include “The Way Of The Future,” “Soul Machine,” and the very emotional track “The Rambler.”

Killswitch Engage’s latest release is the second album since the return of Jesse Leach, and it is one of the band’s strongest efforts. It is full of aggressive, melodic, and groovy tracks with personal lyrics. Highlights from this one include “Hate By Design,” “Until The Day I Die,” and “Embrace the Journey…Upraised.”

You can’t really go wrong with Volbeat and “Seal the Deal & Let’s Boogie” is no exception. The effort is very hooky and full of melody, while maintaining the group’s unmistakable sound. Highlights from this one include “The Devil’s Bleeding Crown,” “Seal The Deal,” and their cover of Teenage Bottlerocket’s “Rebound.”

Green Day released their first album since the “¡Uno!,” ¡Dos,!” “¡Tré!” trilogy and it definitely did not disappoint. It is a  politically charged and very personal effort with songs that range from punk tracks like “Bang Bang” to slower rock songs like “Still Breathing.” Highlights from this one include the previously mentioned songs, as well as “Say Goodbye,” “Youngblood,” and “Forever Now.”

Fans were left amazed when Avenged Sevenfold surprise released “The Stage” back in October. The album brings the band back to their classic sound, which seemed to be lost on “Hail To The King.” The musicianship is on point, and the lyrics are very interesting considering the scientific and artificial intelligence themes. Highlights from this one include “Exist,” which features a guest spot from Neil DeGrasse Tyson, “God Damn,”  “The Stage,” and “Creating God.”

Number one is none other than the mighty Metallica. It took eight years for a proper follow up to “Death Magnetic” and it was worth the wait. The riff infused effort combines elements of the band’s thrash roots with elements of the “Black Album” and even efforts like “Load” to offer a sound that was years in the making. Highlights from this release include “Hardwired,” “Moth Into Flame,” “Dream No More,” “ManUnkind,” and their Lemmy Kilmister tribute “Murder One.”

These are Metal Anarchy’s picks for top 10 albums of the year. Once again, I know I left out a lot. If I had time, I would have probably could have even made a top 20 list. Bands such as Deftones, Meshuggah, In Flames, Thrice, Testament, and more all had stellar albums as well, making it extremely hard to craft this list. Thanks for reading.

I have crafted my Top 10 Album list for 2015. You can check that out below. This is just for fun, and I know I left out a lot, so these are just some of the albums that I enjoyed this year. 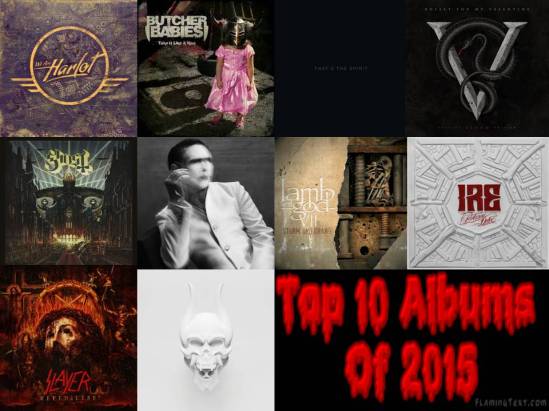 Trivium’s latest album presents a shift in the band’s sound, as they go for a more melodic power metal type of vibe. It has a lack of screaming, but the songs sound bigger than ever, with Matt Heafy’s wide vocal range. The musicianship is also on point as well. Some standout tracks on the effort are the title track, “Blind Leading The Blind,” and “Until The World Goes Cold.”

Slayer’s latest album came at an interesting point in their career, considering the tragic death of Jeff Hannemann, and the fact that Dave Lombardo is absent from the outfit once again, but they still managed to create a brutal masterpiece. It captures the thrashiness of earlier work, and is probably some of their best material in awhile. Some standout tracks on the effort are the title track, “Vices,” and “Pride And Prejudice.”

Parkway Drive really outdid their selves with “IRE.” The effort takes the band’s sound to a new level, and presents some of Winston McCall’s best vocals. Some standout tracks from this one are “Crushed,” “Vice Grip,” and “A Deathless Song.”

You can’t go wrong with Lamb Of God, and the groove metal titans definitely made a lasting impression with their latest release. The effort is different considering Randy Blythe’s manslaughter trial in the Czech Republic, which is a prominent theme in here, but it is still crushing and relentless as always. Some standout tracks here include: “Overlord,” which sees Blythe experimenting with clean vocals, “512,” which has been nominated for a Grammy, and “Embers,” which features Deftones frontman Chino Moreno.

There is nothing you can say about this effort except for the fact that Marilyn Manson is back. It is his strongest effort in years, and goes back to the dark themes that made him infamous. This album is great from start to finish, but some standout tracks include: “The Mephistopheles of Los Angeles,” Killing Strangers,” and “Deep Six.”

Ghost’s latest album is some of their strongest work to date. It is different from their previous work, but it has a cool ’70’s style sound, while still maintaining the dark undertones that the band is known for. The effort is solid from front to back, but some standout tracks are “Cirice,” “He Is,” and “From The Pinnacle To The Pit.”

Bullet For My Valentine’s latest album takes them back to a heavier sound, reminiscent of their debut “The Poison.” It is return to form, and has great guitar work, as well as great sounding clean, and screamed vocals. There’s a good variety on the effort, and all the tracks rock, but some standouts include: “No Way Out,” “Pariah,” “Army Of Noise,” and the title track.

Bring Me The Horizon’s latest effort is a complete departure from their metalcore roots, but at the same time it is great, both musically, and lyrically. Oliver Sykes has abandoned screams, and the band has opted for a more pop-sounding style, but somehow managed to create something unique. There isn’t a bad song on the disc, but some standout tracks are “Blasphemy,” “True Friends,” “Follow You,” and “Throne.”

Butcher Babies latest effort is thrashier, and heavier than their debut album “Goliath,” and is jam-packed with great tracks. They also have some diversity in here as well. A good example of that is a slow track like “Thrown Away,” which is a standout on the album. The whole thing rocks, but some good tracks to check out would be “Never Go Back,” “The Butcher,” and “Blood Soaked Hero.”

Fans were shocked when Danny Worsnop exited Asking Alexandria, but he definitely made up for it with his new band. We Are Harlot’s debut album is great rock record, reminiscent of classic acts like Guns N’ Roses, Mötley Crüe, etc. It’s great from beginning to end, and is something that a lot rock fans would enjoy. Standout tracks from this one include: “One More Night,” “Dancing On Nails,” “Someday,” and “The One.”

These are Metal Anarchy’s picks for top 10 albums of the year. I know I left out a lot, and I would have made a top 20 if I had more time. Bands such as Iron Maiden, Huntress, Metal Allegiance, Clutch, Halestorm, Devil You Know, Thy Art Is Murder, New Years Day, and more all had stellar albums as well, making it extremely hard to craft this list, so it probably isn’t entirely complete. Thanks for reading.

With the year winding down, I thought it would be fun to make my own “Top 10” list. So, here are my choices for the best albums of the year.

This was my number one pick, because it contains some of Slipknot’s best work to date. The whole album rocks from beginning to end and that’s saying a lot since it’s the first without Paul Gray (R.I.P.) and Joey Jordison.

I chose this one because it is one of Arch Enemy’s strongest albums. Every song is pure metal and new vocalist, Alissa White-Gluz (ex-Agonist), really brought new life to their music.

YCSM was a great return for the band, after the tragic death of Mitch Lucker (R.I.P) It’s brutal from beginning to end and new vocalist, Eddie Hermida (ex-All Shall Perish) is great addition to the band. Also these songs are great live tracks, if you get a chance to see them.

You can’t really go wrong with BSC, especially when it comes to their latest release, Magic Mountain. It is their hardest album to date and it has many hits, such as “Me And Mary Jane,” that’ll keep you hooked.

The self-titled debut from the supergroup, Killer Be Killed is a solid album. All the songs rock and it’s one those albums that just seems timeless. Besides, what’s not to love about a band featuring members of Mastodon, Soulfly, The Dillinger Escape Plan and The Mars Volta?.

This was a good choice, because its a hard hitting album with tons of new classics. The band defiantly topped their last album (Locust) with this one.

Kyng is a great new band and have continued to reach grand heights with their second album. All you have to do is listen to the title track and your hooked.

08. The Pretty Reckless – Going To Hell

The Pretty Reckless topped their debut album with Going To Hell. Every song has potential to be a hit. In fact, The band even made radio history by being the second female fronted band to gain two #1 hits (“Heaven Knows, “Fucked Up World”) in a row on rock radio.

New Medicine’s first album (Race You To The Bottom) is an awesome album, so fans were eagerly awaiting a followup. Then they released BTM. Musically, it’s different from their debut and their previous work, when they were A Verse Unsung, but it still rocks and it still has that special something that makes them New Medicine.

Now this one doesn’t need an explanation. It’s the legendary, AC/DC. It kind of sucks Malcolm Young couldn’t be a part of it, due to dementia, but it still rocks as hard as their previous work.