Todd La Torre (Queensrÿche) has premiered an age-restricted video for his song “Vexed.” This track is from his solo album “Rejoice In The Suffering.” La Torre commented:

“’Vexed’ highlights the unfortunate reality that many nations and its people are facing. Past and present parallels of civil rights movements, social injustices, and the uprisings surrounding geopolitical landscapes are woven throughout the exposé, displaying overt footage from various countries with no exclusivity. Despite its thought provoking and unfiltered content, Thomas Crane of killDevil Films really drove home the vision that Craig and I wanted to convey. This video is really an artistic collage of performance, the ominous side of humanity, and unwavering altruistic heroism. The overall point and message is that we must learn and understand the profound significance of the past and present if we are to have salutary progress for the future.”

During an episode of his “Cooper Stuff” podcast, Skillet’s John Cooper made some controversial claims regarding the coronavirus pandemic, including his belief that masks are “nothing more than theater.” The comments obviously didn’t sit well with a number of people, including Queensrÿche’s Todd La Torre, who blasted Cooper and challenged him to “volunteer on the Covid floor of a hospital maskless.”

Cooper said the following [via Blabbermouth]

“I think that your conscience — your personal conscience before the Lord — has to come into play in a really big way in these issues. If you feel like that the best thing that you can do unto the Lord is to get a vaccine, I would say go for it. That’s between you and the Lord. That’s up to you. Go for it. Absolutely no judgment from me. If you want to get a vaccine and wear a mask, if that’s what you feel like you need to do, that’s up to you. If you wanna wear a mask, up to you. I feel this is an issue of, like, hey, everybody can make kind of their own decisions here, because it’s kind of a weird time we live in. What I don’t like is on these very complicated issues when the dogmatism comes in of, ‘If you are a believer, you will do this,’ when there’s so much to talk about.”

“The issue of the mask wearing, to me, is nothing more than theater. It is making me jump into an unreality, something that I do not believe, just to acquiesce to either the overlords — overlords meaning government, Big Tech, big business, big media, whatever — to acquiesce to what they want me to do. Even though I know that it’s not true, but I’m gonna play the game. And every time I put my mask on, I know that I’m doing something that I do not believe in. In other words, I’m being forced to lie… I’m being forced to jump into something I don’t believe, and I’m living by a lie — I’m living by a lie that this mask is actually gonna keep me safe from all harm. To acquiesce to the government, which says that I’m believing something that I know that I don’t believe. So now I’m basically living in a fantasy world. That frightens me. And every time I put that mask on, that’s basically what I think. I know I’m doing this, I know it’s show, I know it’s theater, I know my overlords don’t even believe in it, because if they did, they wouldn’t be breaking all of their own rules.”

La Torre then responded with the following:

“Cool, then go volunteer on the Covid floor of a hospital maskless and let us know how that works out. He believes in a mythical celestial dictator but doesn’t believe in science. Got it.”

Todd La Torre (Queensrÿche) has premiered a new video for his song “Hellbound And Down.” This track is from his recently released solo album “Rejoice In The Suffering.” La Torre commented:

“‘Hellbound And Down’ is about crossing a line and paying a price. Musically, it is an action-packed metal tune with relentless groove, varying vocal textures, and vocal range. This song once again showcases stellar guitar riffs and soloing by Craig Blackwell.”

Todd La Torre (Queensrÿche) has premiered a new video for his new song “Crossroads To Insanity.” This track is from his debut solo album “Rejoice In The Suffering,” which will be released on February 5. La Torre commented:

“‘Crossroads To Insanity’ is one of our favorite tracks on the album. With a slow and moody opening and verses, it builds into a full-blown heavy chorus, sliding into a masterful melodic guitar solo. This song not only exhibits another texture, but also provides balance and musical diversity to the album.”

Todd La Torre (Queensrÿche) has premiered a new video for his new song “Vanguards Of The Dawn Wall.” This track is from his debut solo album “Rejoice In The Suffering,” which will be released on February 5. La Torre commented:

“‘Vanguards Of The Dawn Wall’ is a full-throttle thrasher. We wanted a no-nonsense, fast-paced shredder, with intense guitar riffs, solos, drumwork, and vocals. This song was inspired by a few different documentaries surrounding two particular near-insurmountable feats of rock climbing. While initially written about those achievements, this song is really meant to represent and embody this very special breed and the spirit of all climbing.”

Todd La Torre (Queensrÿche) has shared an EPK featuring footage from the making of his debut solo album “Rejoice In The Suffering.” That effort will be released on February 5.

Todd La Torre (Queensrÿche) has premiered a new song titled “Darkened Majesty.” This track is from his debut solo album “Rejoice In The Suffering,” which will be released on February 5. La Torre commented:

“‘Darkened Majesty’ was one of the last songs written for this album. After having much of this album written, we wanted a song that immediately started out with a faster tempo. To be perfectly honest, this song was completely written in two days. We felt that for a first song, this showcases some of that vocal and musical diversity that exists on the album. Thanks to everyone for all of the amazing interest and valued support of my debut solo album!!”

Todd La Torre (Queensrÿche) has announced that he will be releasing his debut solo album “Rejoice In The Suffering” on February 5, 2021. The frontman said the following about the effort:

“‘Rejoice In The Suffering’ was truly a labor of love. It’s a pure metal record that certainly showcases a wide range of my vocal abilities. I feel there is something for any true fan of metal on this album. This album is full of groove, dynamics, power, and substance and I can’t wait for people to hear it.” 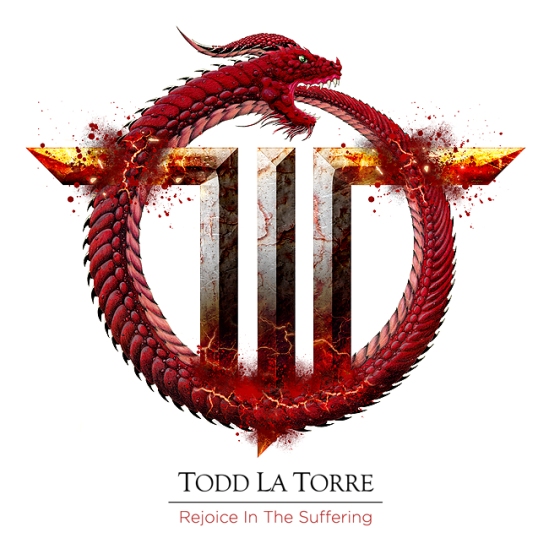 “Rejoice In The Suffering” Track Listing: