During an interview on the “Rock & Roll Beer Guy” podcast, Mastodon’s Bill Kelliher offered an update on the band’s new album. On top of that, the guitarist also revealed that the group have written a new song for the third installment in the “Bill & Ted” series, “Bill & Ted Face The Music.”

Kelliher said the following when asked how the band are spending their coronavirus downtime:

“MASTODON hasn’t worked since last summer. We’ve been taking this time off to A) relax, B) write a new record. And we were kind of right in the middle of it, and we had about 20 rough songs recorded right before this [pandemic] hit.

I’m actually leaving tomorrow for Atlanta. We’re gonna get back together and try to get back into finishing a few things that we started and just see where we get.”

He continued after being asked what fans can expect from the new record:

“It’s all relative to who’s writing. With ‘Emperor Of Sand’, my mom was really sick with brain cancer and tragically passed away from that right when I was in the heart of writing that. And I was getting a lot of my demons in my riffs out for that record in particular; I really helped write that a lot. And with this new record, it’s kind of the same. I’ve definitely been writing like a madman, like crazy.

It’s different than ‘Emperor Of Sand’, but there’s definitely a vibe going on. I don’t know how to describe it.

I’ve been doing these ‘Riff Of The Day’ things live on Facebook and Instagram — videos of me just playing riffs, just playing old songs, and I have to re-learn them and everything. And most of them are off ‘Emperor Of Sand’, the stuff that I wrote I’m showing. So I’m, like, ‘Wow, these are some sick riffs.’

The new record, the stuff I’ve written, is not quite as notey as that, but it’s definitely got more NEUROSIS heaviness, simplified guitar parts. And Brann [Dailor, drums/vocals], he always demos most of the vocal ideas, ’cause he always has melodies, and he’s been singing on a lot of it, at least for the demo purposes. The vocals are kind of ‘Asleep In The Deep’ style — kind of RADIOHEAD-ish almost, real melodic, just a lot of vocal harmonies.

Even though we’ve done, like, 20-25 songs, we still don’t have all of Brent’s [Hinds, guitar/vocals] songs in there yet. And there’s still a lot of time for that stuff to change and to morph into other stuff.

Kelliher also said the following about writing a track for “Bill & Ted Face The Music”:

“We got asked, like a couple months ago, to be a part of the new ‘Bill & Ted‘ movie, to put a song in there. So we wrote a song to be in that movie which we’re kinda of wrapping up now. It’s pretty fun.”

However, he did add that there was some creative differences between the band and the director:

“Working with Hollywood is — same with record companies — they think that when you’re an artist, a musician, it’s like going to McDonald’s — they can just order what they want and you get it your way, and there it is. It’s, like, no, it doesn’t [work that way], at least with our band. There might be some session guys or whatever that can work like that, like, ‘Hey, I want a bluesy jingle that goes something like that,’ and they can pull that out of their ass in a minute. But we’re not like that.

With the movie industry, they were, like, ‘We want a song for the movie, and this is the description of the part.’ So we wrote something, and we turned it in, and we don’t hear back for weeks, for months. And then they’re, like, ‘Yeah, well, the director doesn’t really like this part’ — I guess like a 20-second clip — and he’s, like, ‘Yeah, he doesn’t like this. Can you change this?’ And I’m, like, ‘No. I can’t. I’m not changing it. I’m sorry. Don’t use the song then.’ I was pissed. They were, like, ‘They wanted more like an AC/DC style,’ and I’m, like, ‘Then fucking call AC/DC.’

We wrote a killer fucking song, and the music director of the movie, he’s the one that chose us, he loves the song, but the director is, like, ‘Well, this is clashing with that.’ I’m, like, ‘You’ve had it for months. Why didn’t you tell us months ago?’ Especially now with the pandemic, nobody’s in the same room together. It’s not like we all live in the same studio and we can just pull stuff out of our ass all day long.”

During a recent interview with Kerrang!, Mastodon’s Troy Sanders reflected on 2019 and discussed his plans for 2020. Among those plans is a new Mastodon album, which he hopes to release this year.

Sanders said the following when asked about new Mastodon music:

“We’re constantly creating. When we’re out on tour, we’re always coming up with lyrics, riffs or half-songs on voice notes and the Pro Tools rig we take out with us. The long touring process for ‘Emperor Of Sand‘ ended in July, and we all took a couple of months off. Then we all started calling each other with the itch. Through November, we’ve been in Atlanta sifting through ideas. We’re always moving forward.”

He also opened up about the deaths of the band’s manager Nick John and their tour manager Bob Dallas and how it may influence the new material:

“We lost both our tour manager and band manager last year. Nick John had managed our band for 15 years, and he died of pancreatic cancer. He was our best buddy and our biggest fan. He was really our friend before he was our manager. After seeing us play at this little show in New Jersey in 2004, he took us from nothing to being on Ozzfest within three months. I wouldn’t even be talking to K! if it wasn’t for him. Our tour manager Bob Dallas passed away, too.

Artistically, we usually respond well to tragedy. It’s all part of life. It’s going to happen one way or the other. The four of us are brutally thankful that we have Mastodon to channel that energy through, to find something beautiful and to create something that lasts forever.”

He later finished the chat by laying out his plans for 2020:

“I’m gonna go skiing in Utah, I’m going to put out a new Gone Is Gone record, and hopefully there’ll be a new Mastodon album, too. Onward and upward – that’s the motion!”

It looks like Mastodon’s new album may be released in 2020. Drummer/vocalist Brann Dailor revealed the tentative plans after being asked about his future plans during an interview with Rolling Stone: 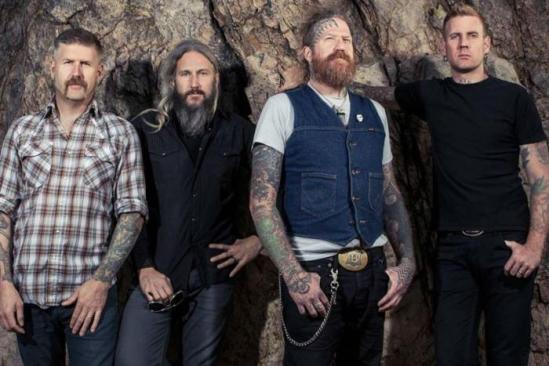 It looks like Mastodon are getting ready to work on some new material. Brann Dailor confirmed the news on Instagram:

“Had a beautiful walk through the woods around Asheville with my Dad and stepmom. Perfect visit for some inspiration as we’re about to really dig in on some new @mastodonrocks material. Feeling the doom.”

During an interview with BallZach of Razor 94.7 104.7, Mastodon’s Brann Dailor talked a bit about the band’s new album plans. According to him, the group actually have “too much material” for the effort.

“We have a song that we wrote, and we recorded it. We have done so much touring — for ‘Emperor [Of Sand]’, and then we did this ‘Crack The Skye‘ [anniversary] tour with Coheed that we just got off of, and then we just had, like, a week and a half or two weeks in between, and then these two festivals — but this is it.

We have one festival in October, but we have a couple months [off now], and we’re kind of chomping at the bit to get in there and put together some of the ideas that have been swirling around. There’s lots of riffs; there’s lots of material. There’s too much material, so we need to get in there and start chipping away at that giant hunk of granite and hopefully produce a beautiful sculpture for all to see.”

The band were previously planning to release a new song with Neurosis‘ Scott Kelly earlier this year, but things didn’t end up working out.

Mastodon have shared a three minute video to tease the animated movie that they are using on the LED screens during their ongoing “Crack The Skye” 10th anniversary tour. You can check that out below:

The #UnheavenlySkye Tour with @coheed and @everytimeidie has been amazing! We collaborated with some friends of ours to create a new "Crack the Skye" animated movie for the LED screens! Here is a 3 minute teaser! Thanks to our friends who worked on making this happen! pic.twitter.com/2LmAPqyhgc

Mastodon have shared the sixth episode of their “Crack The Skye” 10th anniversary video series. The latest clip focuses on Brent Hinds’ 2007 altercation at the MTV Video Music Awards, which left him in a coma. At the time, it was reported that Hinds got into a drunken fight with Shavo Odadjian (System Of A Down) and William Hudson. However, members of the band have since said Odadjian’s role in the fight was not as significant as Hudson’s role. On another note, Mastodon are performing “Crack The Skye” in full on their current tour with Coheed And Cambria and Every Time I Die.

Mastodon have been celebrating the 10th anniversary of “Crack The Skye” with a video series focusing on the making of the album. You can check out the fifth part of the series below. As previously reported, the band will also perform the effort in full on their upcoming tour with Coheed And Cambria and Every Time I Die.

During a recent interview with Heavy Consequence, Troy Sanders was asked about Mastodon’s new album plans. According to him, the group will probably work on the effort this fall.

Sanders said the following when asked about the band’s plans to work on a new album earlier this year:

“Well that was the intention. We just completed the European tour in February and months ago, it felt like that would be a good stopping point of the ‘Emperor Of Sand‘ touring cycle. But then this opportunity came up to co-headline with Coheed, so we decided this would make sense and it would be the 10th anniversary of ‘Crack The Skye‘, so we decided to take the summer tour.

So, instead of writing a new album, instead of diving head first into new new material right now, we’ve kind of just been enjoying a little home time and then rehearsing a lot of old material for this set that we’re doing this summer. So, we don’t really talk about it or mark the calendar, but just knowing how our band’s operated for the past 19 years, once we recover and enjoy some home time after the summer tour, we’ll probably, all four of us, I imagine, will be very excited to dive head first into new material.

And we never put timelines on us. We never put those restrictions on ourselves. We just want everyone to be excited about it. So it needs to come naturally. But I would imagine that we’ll work [on a new album] in the fall of this year.”

It’s worth noting that Mastodon were previously planning to release a new song with Scott Kelly this year, but “some circumstances” got in the way of that.

In other news, the band’s cover of Led Zeppelin‘s “Stairway To Heaven“ will officially receive a digital release on May 17.

Mastodon have been celebrating the 10th anniversary of “Crack The Skye” with a video series focusing on the making of the album. You can check out the fourth part of the series below. As previously reported, the band will also perform the effort in full on their upcoming tour with Coheed And Cambria and Every Time I Die.