Ingested and Kill The Lights (ex-Bullet For My Valentine, etc.) have been added to Bleed From Within‘s European/UK tour. That run is scheduled to take place this fall.

Kill The Lights (ex-Bullet For My Valentine, etc.) have postponed their UK tour with Aviana due to the coronavirus pandemic. The trek will now take place in March 2022. Here’s the new dates:

Kill The Lights are streaming a cover of Metallica‘s “Battery.“ Drummer Michael “Moose” Thomas (ex-Bullet For My Valentine) told Knotfest.com the following about that:

“We were talking about doing another ‘Quarantine Cover’ after we had so much fun covering ‘Into The Pit‘ by Testament, and it was obvious that we had to try and top that. In my mind, I’ve always wanted to cover anything off the amazingly good ‘Master Of Puppets‘, and it came down to a choice between ‘Disposable Heroes‘ or ‘Battery.’ We chose the latter just because we all agreed that it would be a good challenge to hopefully do justice to. And of course, we’re massive Metallica fans (who isn’t?) and we had a fun time tracking it.”

Kill The Lights (ex-Bullet For My Valentine, etc.) will be performing five songs during a special livestream set tomorrow (August 27) at 9am PDT / 12pm EDT. You can watch that on YouTube. This news comes after the band recently released their debut album “The Sinner.”

Kill The Lights (ex-Bullet For My Valentine, etc.) have announced a UK tour with GroundCulture. The band will be touring in support of their new album “The Sinner“ (out August 21). Here’s the dates: 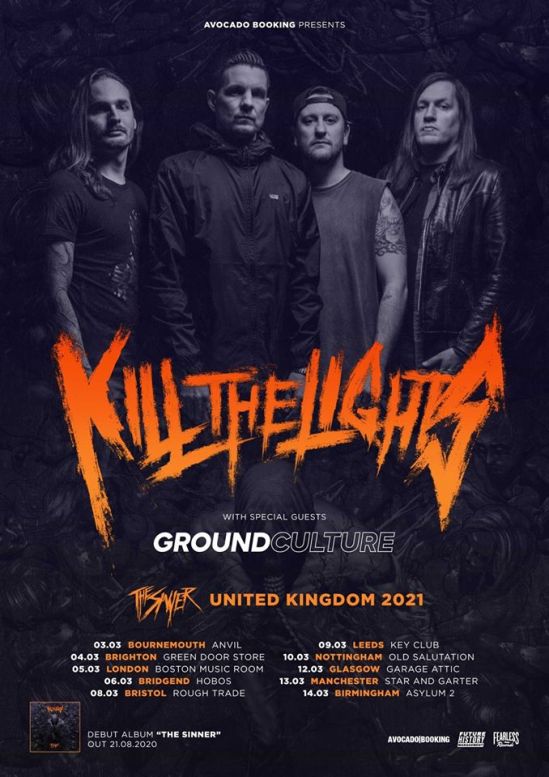 Kill The Lights (ex-Bullet For My Valentine, etc.) have premiered a new video for their new song “Through The Night.” This track is from the band’s new album “The Sinner,” which will be released on August 21.

“The song very personally hits home for me. I have struggled for the longest time with anxiety and depression and ‘Through the Night‘ is a snapshot of what is going through the mind of someone struggling with these types of mental health issues.

The song takes you on a roller coaster ride and captures the ups and downs of someone carrying the weight of the world on their shoulders, going from happy and energetic one minute to being paralyzed by fear and worry the next.”

“Luckily, I found just enough strength to speak up and get some help. I will be the first person to admit I still find it hard to share feelings and talk about my problems. Sharing my struggles through my lyrics is a form of rehab for me — it allows me to be honest and open while still being able to hide behind the music.

I hope that this song truly connects with listeners who feel trapped and alone with these types of feelings and that it empowers them to reach out and get the help they might need.”

Kill The Lights (ex-Bullet For My Valentine, etc.) have shared a quarantine cover of Testament’s “Into The Pit.” Michael “Moose” Thomas commented:

“There were a ton of cover songs options we could have gone with, and we did consider covering a pop song in our style. But we decided to cover ‘Into The Pit‘ by the mighty Testament purely because it’s a classic song that’s fun to play. We wanted to stay true to the original as closely as possible, to pay our respects to metal royalty. A great song by an amazing band.”

Kill The Lights (ex-Bullet For My Valentine, etc.) have premiered a new video for their new song “Plagues.” James Clark (ex-Throw The Fight) commented:

“Lyrically, ‘Plagues‘ deals with the fear of being alone, and feelings of isolation away from family, friends, and loved ones. It forces you to take a hard look at yourself and accept that we are all vulnerable and need human interaction and love. It reminds us to take each day for what it is, and to make the best of bad situations — because nothing is guaranteed.”

Kill The Lights (ex-Bullet For My Valentine, etc.) have signed a new deal with Fearless Records. With this news, the band have also premiered a new video for their new song “Shed My Skin.” James Clark (ex-Throw The Fight) commented:

“‘Shed My Skin‘ is about accepting the ‘real’ you and being comfortable with yourself. It’s about understanding that we are all broken and we are all flawed. We need to stop struggling in silence and need to reach out and ask for help before it’s too late. I personally struggle with anxiety, depression, and self-esteem issues, and some days life can be too much and I’m ok admitting that — because that is the true me. As the lyrics say, ‘I’m not bleeding. I’m just broken, and ready to shed my skin.’ We are all the same — I am you.”

Kill The Lights, the band featuring Michael “Moose” Thomas (ex-Bullet For My Valentine), James Clark (Throw The Fight), Jordan Whelan (Still Remains), Travis Montgomery (Threat Signal), and Davey Richmond (Glamour Of The Kill), have offered an update on their current plans via Facebook. According to the group, the “process [for their new album] is almost complete.”

We know it’s been quiet on here lately, since we released our debut single ‘The Faceless’ in January, and ‘Watch You Fall’ a short time later.

Originally, we weren’t sure how people were going to react to our band, or if they’d even care. We knew that a lot of you knew some of us from our previous bands, but we knew that would count for nothing if our new music didn’t connect with you.

After seeing the amazing response to our first tracks and all the love from our fanbases old and new, we felt like we owed it to you and to ourselves to go away and make sure that when we do drop our debut full length record, it’ll be the best record possible.

We’re pleased to say that the process is almost complete, and we’ll have more news for you on that very soon – as well as some other exciting news which means that we’re finally going to be able to get out and see you guys in the flesh and give you the best KTL show possible.

Thank you all so much for staying patient. We promise that the wait will be worth it.

In the meantime, feel free to share our music with your friends. More of that coming very soon.