Max Cavalera has shared three more episodes of his “Max Trax” series. The latest ones find the frontman discussing Killer Be Killed’s “Face Down,” Sepultura’s “Inner Self,” and Cavalera Conspiracy’s “Sanctuary.”

Cavalera Conspiracy have premiered a new video for their new song “Spectral War,” via cvltnation.com. This track is from the band’s new album “Psychosis,” which was released today (November 17). Max Cavalera commented:

“Our new video ‘Spectral War‘ was directed by the great tattoo artist, Paul Booth. It focuses on the idea of manipulating war through the ages! I’m very excited for the release of ‘Psychosis‘! Death/Thrash Metal is back to set the world on fire!!!”

Cavalera Conspiracy have premiered a new song titled “Spectral War.” This track is from the band’s new album “Psychosis,” which will be released on November 17.

Cavalera Conspiracy have premiered a lyric video for their new song “Insane.” This track is from the band’s new album “Psychosis,” which will be released on November 17.

Cavalera Conspiracy have released a new song titled “Insane.” You can stream that on Spotify. The track appears on the band’s new album “Psychosis,” which will be released on November 17.

The details have been revealed for the new Cavalera Conspiracy album “Psychosis.” That effort will be released on November 17. 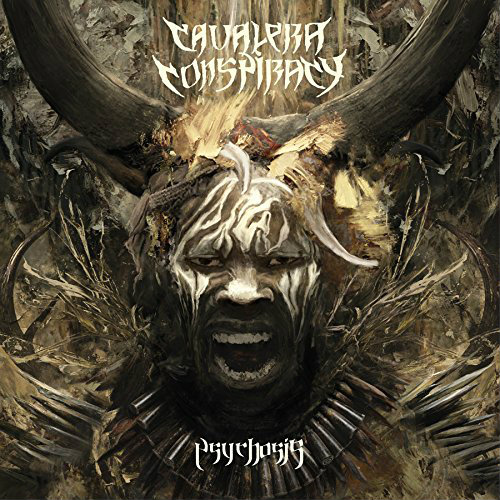 Cavalera Conspiracy have confirmed that their new album “Psychosis” will officially be released on November 17. More details are still pending, but Max Cavalera recently discussed a few tracks. You can see what he had to say HERE.

During a recent interview with Revolver, Max Cavalera has discussed the new Cavalera Conspiracy album “Psychosis.” That effort, which was produced by Arthur Rizk, is tentatively planned to hit stores in October via Napalm Records. You can read about some of the upcoming new songs below.

“That’s one of my favorite new tracks right now, and Godflesh have been one of my favorite bands forever, from 1989’s Streetcleaner on. When [Broadrick] said he would be a guest on the record, I was like, ‘Oh my God! My mind is going to explode!'”

“[It’s] about the drones that they bomb people with. I did a lot of reading about drones for that and there’s a movie called ‘Eye in the Sky,’ so I use the name in the lyrics. I can’t wait to hear what Justin does with it. We purposely wrote it with drum machines so it sounds like a Godflesh song.”

Cavelara on “Judas Pariah,” which focuses on internet trolling:

“I was feeling really angry about different stuff. Even stuff like shit-talking on the Internet and all this bullshit that I had nothing to do with. I did a song called “Judas Pariah” and it’s pretty much about all those people. I just don’t understand it. It’s like the Palestinians and the Israelis. No one can get along and it’s like our war we don’t want to be in.

It’s fucked up, man. I always said music is a weapon, so I just thought, ‘Fuck it, man. I’m just gonna let it all out.’ Especially in front of all the shit-talking trolls. So I wrote something really brutal. And I’m not just saying, “Fuck you.” I’m talking about soul-stealing shit. The ending has a riff that sounds a little bit like Celtic Frost‘s “Procreation of the Wicked.” And Arthur put some keyboards on it so it has this classical sound that’s fucking huge, like To Mega Thereon on a Cavalera album. It’s pretty much a black-metal song.”

Cavalera on “Negative Fucks,” which focuses on Donald Trump, and “Terrorist Tactics” which deals with ISIS:

“We have a punk song that’s about the whole Donald Trump thing. There’s lines like, “Not my president, not my god, not my king.” It’s called “Negative Fucks.” It’s a name that Greg Puciato from Dillinger Escape Plan came up with as a possible name for our side band Killer Be Killed. I love that name. It’s so punk rock. We had this great riff, which sounded like Discharge meets Nails meets Napalm Death, right to the bone.

I’m singing about this propaganda hate machine. The chorus goes, “Negative fucks! Negative fucks!” And in the background I’m doing this voice that sounds like a demented psycho laughing. And then there’s “Terrorist Tactics,” which is all about the shit going on with ISIS. The whole extremist propaganda, where if you don’t convert to their kind of Islam they will kill you.”

Head to Revolver to read more.

It looks like Godflesh’s Justin Broadrick will be guesting on the new Cavalera Conspiracy album. Max Cavalera confirmed the news during an interview with The Rockpit.

“…We have a new Cavalera Conspiracy album that is done, it’s going to be mastered tomorrow. It’s going to come out in October on Napalm Records, it’s a beast of a record. I think it’s got a really cool mix of death and thrash metal, it’s a really well put together album and we have Justin from Godflesh singing on one song.

I put it neck to neck with anything we did in the past, by far my favourite of all the Cavalera albums. I think it’s going to surprise a lot of people. I think we did a great job on the production, our friend Arthur Rizik, he produced the last Power Trip record and Inquisition album so he’s kind of an underground up and coming producer.

He was really excited and motivated to work with us and I really think he got some stuff out of me and Igor that wouldn’t come out normally. He manged to get it out of us, that was great so I’m very excited for people to hear it out in October hopefully.”

He also added the following about Rizik:

“…We worked very closely on the vocals and it was cool because he was showing me a way of singing that I haven’t sung since ‘Morbid Visions‘. He would play pieces of ‘Morbid Visions‘ for me and would say, ‘What do you think when you sung that?’ I was like, ‘I wasn’t thinking’. ‘Do the same with this song, just don’t think about it’.

I would do something crazy and it was fantastic, it was kind of a liberating experience when you have that ‘No Hope No Fear‘ type feeling you know? So we just went for it, we have an instrumental song that’s amazing, we have the Godflesh song and great thrash songs like ‘Impalement Execution‘ and ‘Judas Pariah‘. I think people will really love this one.”

Max and Igor Cavalera were recently interviewed by heavymetal.dk, and discussed the upcoming Cavalera Conspiracy album. You can see what they had to say below:

“We already recorded most of the stuff, and we did it with a producer called Arthur Rizk, [who] is a very young producer coming up. I’ve been friends with him for a few years, and I’ve been noticing he’s been producing some amazing music. He did the latest POWER TRIP, and before, he did some stuff which is more in the area where I listen to a lot of different industrial and noisy stuff. He worked with this guy called Prurient, [who] toured with GODFLESH and stuff. So he’s a really, really cool producer. To have him involved in this new CAVALERA, it was quite a really cool thing that we found, which, for me and Max, it’s always good to have someone that is super passionate about music, the same way we are. So to have someone like him coming in and helping us with ideas and things like that, I think it’s gonna surprise a lot of people, ’cause he understands a lot about what’s going on today in music, and that’s pretty cool — that exchange with us, with the old-school ideas with also someone that understands music right now. So I think it’s gonna come out… I’m far more excited than I’ve been in many years to put out a record like this. So I have to say I’m quite into it, what we’re doing right now.”

“[Arthur] captured the classic Max and Igor in a way that’s never really quite been captured before. It was always his objective from the beginning — he wanted to capture the soul of the brothers, and I think he did. I think it’s quite amazing, looking back, that somebody can get that out of you after twenty-five years, man. That’s awesome. But, like Igor said, there’s a lot of noise also — between songs we’re gonna hear all this kind of crazy just pure noise and heaviness, which is unheard of. So I’m very excited.”

“I think it was a lot of fun record to make — I had a lot of fun making it — because of the passion that Arthur had for this project from the beginning, from Igor’s drumming to the riffs. Now I’m gonna start doing vocals. I already sang two songs, and I can’t wait for people to hear it, because I think people are gonna be blown away… It was recorded in a bunker in the desert, so it’s really cool. In the middle of the desert inside an underground bunker is where the record was made. So… very metal. [Laughs]”

“Everybody likes to say the new record is the best, but, for me, this is… I think it’s gonna be the best CAVALERA we’ve ever done. It’s got all the right elements to be the best one, so I’m excited.”