Deeds Of Flesh have been added to next year’s Maryland Deathfest. The set will serve as the band’s first U.S. show in over 15 years.

“We’re very excited to announce that we’ll be playing the Maryland Deathfest in May of 2022. It will be our first show on U.S. soil in over 15 years! The set list will contain songs from a mix of old and new albums. Let the pummeling begin!

UPDATE: This is likely to be THE ONLY U.S. show in 2022. We won’t be adding any dates around Maryland, so get your asses there if you want to see the show. Power Plant Live on Saturday, May 28, 2022″

The festival is scheduled to take place in Baltimore, MD on May 26-29 and the daily lineups can be found below:

May 27 (Rams Head Live): Blaze Of Perdition, Panzerfaust, The Ruins Of Beverast, and Spite.

May 29 (Rams Head Live): Archgoat, Devil Master, Dark Fortress, and Sacramentum (performing “Far Away From The Sun” in full)

Max & Iggor Cavalera, Morbid Angel, Destruction, and Enforced have been added to next year’s Maryland Deathfest. That event is scheduled to take place in Baltimore, MD on May 26-29, 2022 and the updated daily lineups can be found below. Notably, the Cavalera brothers plan to perform songs from Sepultura’s “Beneath The Remains” and “Arise“ during their set.

Carcass, Triumph Of Death, Triptykon, Mortiferum, Devil Master, Yautja, Scorched, and Cardiac Arrest have been added to the 2022 Maryland Deathfest. That event will take place in Baltimore, MD on May 26-29.

“There are just a few more bands that will be announced soon to finalize the lineup.

This announcement could come as early as sometime next week.

We’ll be posting a breakdown of who is playing at Edison Lot and Rams Head Live on Friday, July 30th. For now, the bands playing at these 2 venues are listed together.

All other ticket options, including single day options, will go on sale on Monday, August 2nd at 10 am EST.

We also wanted to let you know that we’ve been working on a variety of things to enhance your overall fest experience, particularly at Edison Lot.

We are arranging a shuttle system between Edison Lot and Soundstage/Rams Head that will enable you to see as many sets as possible.
Additionally, we are arranging for a significant amount of additional shaded areas at Edison Lot, more tables/seating, and a hydration station.
More info about all of this will be revealed as we move forward in the coming months. 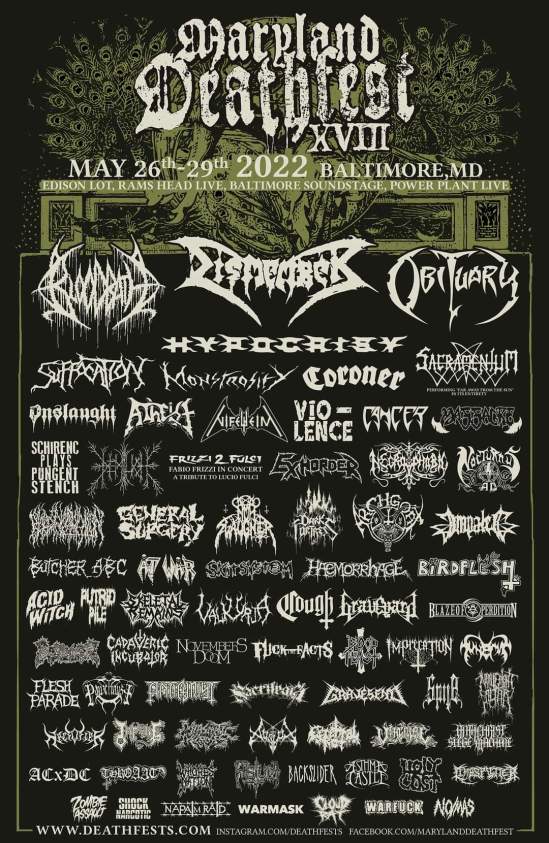 The 2020 Maryland Deathfest has been postponed due to the coronavirus pandemic. The event will now take place on May 27-30, 2021 in Baltimore, MD.

“Maryland Deathfest XVIII has been rescheduled!

As mentioned in previous posts, the goal was to retain at least 90% of the line-up, so we’re happy to say that this has been accomplished despite the incredibly short notice. As with every edition of MDF, we were really looking forward to this line-up and put a lot of time, energy and money into it, so we couldn’t fathom watching it all fall apart. By rescheduling to the same weekend next year, we were able to keep it all from falling apart.

Rescheduling the event to any other weekend in the year would have been much more challenging for us to overcome financially, and the line-up wouldn’t have looked anything like it does now. We needed more breathing space to overcome all of this, so rescheduling to next May was the only solution to give the festival a legitimate chance to stay alive.

As of now, there are only 2 bands, Cadaver and Necrophobic, that still need to give us a final answer about their availability to play on the new dates. We will save a space for both bands until we receive confirmation that they can play or not. If any of them can’t play, they will replaced. We’ll keep you updated on this in the coming weeks.

Death Strike and Prostitute Disfigurement are the only 2 bands that definitely can’t commit to the new dates, so replacements for them will be announced soon.

The rest of the line-up remains exactly the same, including day of show for all bands.

The pre-fest party on Wednesday at the Ottobar has also been rescheduled with the exact same line-up. The new date for the pre-fest is Wednesday, May 26th 2021.

All tickets remain valid for the new dates!

If you can hold on to your ticket for 2021, there is no better way to help us through this situation!

It is somewhat of a disaster for us to process refunds right now, keep the line-up pretty much identical, and have very few funds coming in for months to come. We aren’t making this situation all about our own challenges and understand that this pandemic is making it tough for many of you, but we do need to find a proper balance to handle immediate refund requests and not end up bankrupt at the same time. We will be able to process a fair amount of refunds now, but if the requests are excessive, we will need a bit more time to catch up and offset our losses before everyone can be made whole. We will work with everyone who writes, but there’s only so much we can handle in the immediate future.

If you absolutely cannot attend the new dates, you can request a refund by sending a message to our Facebook page or by e-mailing mdftickets@gmail.com

For those that were planning on getting tickets but didn’t because of the uncertainty over the last month, we will make tickets for MDF XVIII available again in 1-2 weeks. These sales will surely help us through this difficult time.

It feels pretty surreal that we just had to post this news. Of course it’s unfortunate that we all have to wait a year for this to finally transpire, but this decision will give MDF a much better chance to survive for years to come.

We hope to see you at MDF XVIII on the new dates!
In the meantime, stay safe and healthy!