From First To Last have released a new song titled “Surrender.” You can download the track for free HERE. This is the band’s second song with Sonny Moore (aka Skrillex) back on vocals, following “Make War.”

Mike Fuentes has decided to “take a break and step away” from Pierce The Veil. This news comes after sexual misconduct allegations were made against the drummer

“From the day we started this band, the four of us agreed that we not only wanted to write and play songs together for the rest of our lives, but we also wanted to build a strong community through our music and provide a safe place for ourselves and our fans to express our shared values through creativity, open-mindedness, love and respect. Over the last ten years we have accomplished that and so much more with the help of our incredible fans. The bond that we share in this community is stronger than we could have ever imagined and is truly our pride and joy.

Recently, an allegation was made about Mike from an anonymous source pertaining to events dating back nearly ten years ago. We are taking this allegation seriously and would like to share the steps we are taking in response. Below are a few words from Mike.

“I’m of course aware of the allegation made about me from almost ten years ago, and I cannot begin to describe how difficult and disturbing this entire situation has been for everyone involved. I do not take this allegation lightly and would never downplay it. I have empathy for any human being who has experienced abuse or mistreatment in their lives, and I am inspired to see so many come forward and speak out about it. No one should have to suffer in silence, and I am thankful that the world is finally starting to listen. I also want to assure you that I have never intentionally manipulated or abused anyone in my life. That is not the person I am, how I was raised, or the type of behavior that I condone. I strongly believe in the empowerment of abuse victims, so if I have ever made anyone feel like they are less than equal, I am sincerely sorry.

I love playing music more than anything on earth, and I am constantly humbled by the support of our fans. I do not want the allegation surrounding me to negatively affect the reputation or future of the band, or to break the bond and trust that we have created with our fans over the years. So, I have decided to take a break and step away from my position in the band in hopes that this will allow my band mates and fans to continue focusing on the music and message that Pierce The Veil stands for. Though I am far from perfect, I do have a moral compass and try to stand up for what is right. While away from the band, I will continue to work hard to live my life in that way.”

Since the allegation first surfaced, our band has discussed how we can ensure the PTV community is always a safe environment. We’ve made many efforts over the years to protect our fans, and we can and will do more. We believe in creating spaces where people can seek help for any issues they are struggling with and provide resources and tools to help.

As a band, we are respecting Mike’s decision to take break and step away. Unfortunately, without a core member of the band, we will be respectfully withdrawing from the upcoming U.K. tour with All Time Low. We promise our fans that we will be back again very soon.”

Falling In Reverse have shared a behind the scenes look at their recently released “Fuck You And All Your Friends” video, via Billboard. This track is from their latest album “Coming Home.”

Time for the next edition of Metal Anarchy’s “new music showcase,” the feature where I introduce you to up and coming bands that readers of this site may find interesting. This time I have an exclusive Q&A with Timmy Ruzicka from Exit Empire. 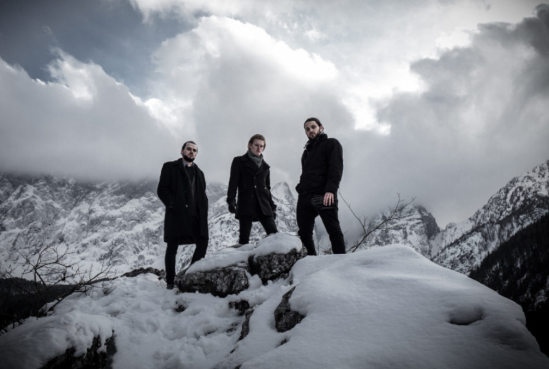 METAL ANARCHY: Tell me a little about your band:

RUZICKA: We are Exit Empire from the Czech Republic, consisting of two brothers and their best friend. This band is completely new, but we’ve known Rafael (the singer) for five years, we’ve been in a previous band together and two years ago we left schools and started to learn audio production. Just to be able to create this band as we wanted it. You probably don’t know many bands from our country, and that’s basically what we want to change.

METAL ANARCHY: Who are your main influences?

RUZICKA: Linkin Park, Bring Me The Horizon, I See Stars. Both for their sound and the emotions we hear in their songs. But the list could go on and on, obviously. There are so many great bands and musicians that touched our heart, no matter the genre. The music we make today has been called post-hardcore, rock, emo, alternative, electro, you name it. Mainly, we focus on singable melodies and heavy riffs, with electro background for epic atmosphere that feels bigger than life. And chants! We love chants.

METAL ANARCHY: What is your latest release and why should readers of this site check it out?

RUZICKA: We released our debut self-titled album in October 2017. We incorporated our own personal journeys to those songs, focusing on feelings and emotions the listener gets from them. It’s such a reward after years of studying production to put the record out and hear positive reactions. Now we need as many people as possible to listen to it, so go check it out! Download it for free on our website http://exitempire.com/download

METAL ANARCHY: What can people expect when they go to your live shows?

RUZICKA: Honest but explosive energy coming from the stage. Live shows are the absolute pinnacle of the artist-fan relationship, and we want to honor it as much as we can. That’s where our hearts lie, and that’s where we want everyone to sing with us. But since we are from the Czech Republic, we need help getting shows abroad! So don’t be afraid to hit us up on any social media.

METAL ANARCHY: Where do you see your band heading in 5 years?

RUZICKA: We actually have a specific long-term goal for this time period – we want to play a show in the Wembley Stadium. It’s been a dream of ours for years, a simple visualisation of what we want this band to achieve. Is it too ambitious and a long shot? Maybe. But without the drive to touch the sky, there would be no stars.

Falling In Reverse have premiered a new video for their song “Fuck You And All Your Friends.” This track is from their latest album “Coming Home.”

In other news, the band have also announced a European tour with The Word Alive and Dead Girls Academy:

Pierce The Veil have premiered a new video for their song “Today I Saw The Whole World.” This song is from the band’s latest album, “Misadventures.” Vic Fuentes commented:

“I grew up watching massive amounts of MTV music videos throughout the 90’s. I would record all of my favorites on VHS tape, watching them over and over until the tape wore out. Our new video was inspired by some of these artists that I loved back then like the Beastie Boys, Cypress Hill and Marilyn Manson. We wanted to use this 90’s look to visually express the lyrics and fury inside of the song.”

Falling In Reverse, All That Remains, Ocean Grove will be heading out on tour together this fall. Check out the dates below.