Divine Heresy‘s “Bleed The Fifth” and “Bringer Of Plagues” are set to be released on vinyl for the first time on May 21. You can pre-order those at m-theoryaudio.com. Notably, “Bleed The Fifth” will include the bonus tracks “Purity Defiled” and “Parasite Drama,” while “Bringer Of Plagues” will include the bonus track “Forever The Failure.” 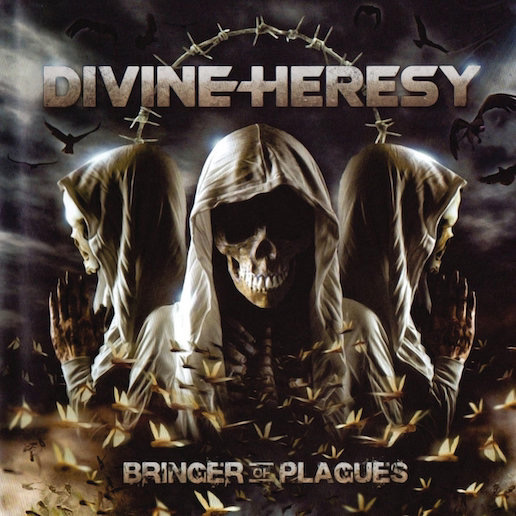 During a recent appearance on Nuclear Blast’s “Saturday Night Lockdown” with Francesco Paoli (Fleshgod Apocalypse), Dino Cazares addressed the status of Fear Factory once again. The guitarist said the band have been inactive due to lawsuits, but he is still hoping “that things will change.”

He continued when asked if the band will have a proper comeback:

“We’ll see. I can’t say yes or no, but I’m gonna be very positive and I hope in the near future that things will change.”

Cazares also discussed the recent rumors suggesting that Fear Factory were planning to do a “Soul Of A New Machine” tour:

“That was definitely a rumor. I was actually answering somebody on Twitter, ’cause somebody asked, ‘Hey, would you ever considering doing that?’ And I said, ‘Hey, do enough fans know about that record?’ ‘Cause people really didn’t discover us till ‘Demanufacture’; not a lot of people really know about ‘Soul Of A New Machine’. So the answer was on Twitter, ‘Hey, do enough people know about this record to play it in its entirety on tour?’ And for some reason, the media took it as FEAR FACTORY was discussing on doing ‘Soul Of A New Machine’. It kind of blew out of proportion, and that’s not what I meant.

He also added the following when asked how he has been spending his coronavirus downtime:

“Me being quarantined, I’ve been really lucky, ’cause my engineer lives next door, so I was able to go over there and write a lot of music.

I’ve been writing for everything — for ASESINO, for DIVINE HERESY and for possible FEAR FACTORY. So I’ve been writing and getting ready, getting prepared, so I’ll be ready and prepared and have stuff already written.

My band ASESINO, we haven’t put a record out since 2007. So now that I’ve got this time, I go over there and we’re almost done with the record. So pretty soon you’ll be seeing some new stuff from ASESINO.”

Cazares also revealed that he is still trying to choose a singer for a new project “in the style of Fear Factory and Divine Heresy”:

Dino Cazares (Fear Factory, Divine Heresy, etc.) is currently seeking a singer for a new project that he is working on. The guitarist said the following in a since deleted tweet:

“Looking for a singer for a new project in the style of @FearFactory and Divine Heresy if u feel u got what it takes send video to dinonewproject@gmail.com”

As previously reported, Joseph Payne (ex-Nile/Divine Heresy) has sadly passed away at the age of 35. A GoFundMe campaign has since been launched to help pay for funeral expenses.

“Joe was just 35 when he tragically passed away January 24th, 2020. He was an incredibly loving fiance, son, brother, and friend. Joe was an amazing soul, a dreamer and story-teller, easy to love and always willing to share that humor, love and energy with everyone he encountered.

Joe‘s most profound passion was his music and sharing it relentlessly. Self-taught thanks to endless hours listening to Metallica, whether he was playing guitar or bass, Joe‘s energy and skill captured the attention of all who listened and allowed him to share himself and his stories with so many all over the world.

Above all, whether it was making soupy mac ‘n cheese, being playful with his nieces or just being gross ‘Uncle Joe Joe”, protecting his family or just being the original “Lovey”, Joe was more then anything loved back by so many more.

So we are asking for all to help us celebrate one last time the life and times of Joseph Payne and ensure he has a funeral service that everyone can be apart of and appreciate. Thank you everyone!”

Joseph Payne (ex-Nile/Divine Heresy) has sadly passed away at the age of 35. No cause of death has been revealed at this time.

“Our Metal brother Joseph Payne has passed away. Another one gone way to young.
I wasn’t going to say anything until I got confirmation from his family, which I now did. At this time no cause of death has been revealed.

Joe was a great friend, a great band member and an incredible musician. Although he played bass in ‪Divine Heresy‬, he was an incredible guitarist. I first saw him playing bass in Nile and right then and there, I said, ‘I want that guy in my band.’

After having that first conversation that night, I realized he was a great dude and from there on, we’ve shared some amazing moments in life and on tour,from Australia to South America to Canada to Mexico to Europe etc..

Joe was a very outgoing funny guy with a very friendly personality. He was loved by many and he loved all his fans and road friends. He never complained when times got tough on the road. He always helped everyone and worked his ass off when he was in DH and I admired him for being that way.  

We love you and we will miss you Rest In Peace my friend.
–Dino Cazares“

“The members of Nile were saddened this weekend to learn of the passing of one of our own, Our Dear Metal Brother Joe Payne. We have no details as yet what caused this tragedy, but his loss is a profound one. During Joe’s time with Nile in 2005-07, Joe was a true brother and band member in every sense of the word. He always gave 110% onstage every day, was full of positive enthusiasm, and was a brightly burning Spirit. Joe joined us at the tender age of 19, on recommendation from Kreishloff of Lecherous Nocturne. Possessed of an incredible talent beyond his years, Joe was never afraid to face any of the challenges in stepping onto the world’s stages; the very first obstacle of course was learning the entire Nile set and stepping into the uncomfortably large shoes of recently departed legendary Nile bassist Jon Vesano. Just being able to play those difficult Nile songs on bass while doing Jon’s vocal parts was a herculean task, let alone pulling it all off convincingly in less than a week. But Joe fearlessly stepped up, and boldly walked out on the stages all across Europe to help promote the Annihilation of the Wicked album. Joe of course killed it from the first note, nailing the songs with an awesome stage presence and a supernova of metal energy. It became immediately clear that Metal was what Joe was born to do. The next 2 years of Touring for AOTW were an exceptionally busy time for Nile, and Joe’s fire and will to conquer never let up, not for a single moment. On and off stage, Joe was a great band member, traveling companion, and friend. The time Joe spent with us is something we will remember always. Rest in Peace, Brother Joe, You are a True Metal Warrior.”

“Big news of the day, Matt Devries (Chimera/Fear Factory) officially joins 93!!!! This has been in the works for a long time, Matt is a very close friend and absolutely amazing player and it’s an honor to have him on board. Music is coming along very fast and bringing Matt on board is going to add a totally new dynamic to it. APKD 93/93″

Big news of the day, Matt Devries (Chimera/Fear Factory) officially joins 93!!!! This has been in the works for a long time, Matt is a very close friend and absolutely amazing player and it's an honor to have him on board. Music is coming along very fast and bringing Matt on board is going to add a totally new dynamic to it. APKD 93/93 . . #brianwerner #ninetythree #93 #chimera #fearfactory #morbidangel #mattdevries #timyeung #dowhatthouwilt #fortheloveofviolence #immortalwill #vitalremains #behemoth #nogod #thelema #crowley #instahell #deathmetal #metal #picoftheday #blackmetal #thrashmetal #epicmetal #deicide #slayer

Despite his recent apology video, Phil Anselmo (Pantera) is still being blasted for doing a nazi salute, and yelling “white power” while onstage at Dimebash. The latest people to speak out include Anthrax’s Scott Ian, and Travis Neal (The Bloodline/Divine Heresy).

All dangerous no matter what the context. I have ZERO TOLERANCE for any of this and to not speak out against them is as dangerous as the acts themselves.

Philip‘s actions were vile and that should be the focus here, anything else is just noise.

Philip has apologized and I would like to offer him the opportunity to really show how much he loves everyone by making a donation to the Simon Wiesenthal Center.

“Fuck this guy! Damn shame when someone that has paved the way for so many and so many looked up to and still look up to would do this and shit on Dime and a tribute to him by so many great musicians that respected and loved him and his band. It is ok to be proud of who you are and where you come from but not the way that this asshole did on stage. Fuck you Phil and fuck your apology! We live in 2016, there is no room for racism or hate. If we as a human race want to remain then we all need to unite. One world, one blood, we are all one!”