During a recent interview with Knotfest.com‘s “Mosh Talks With Beez,” Jesse Leach (Killswitch Engage) confirmed that Times Of Grace have officially finished their new album. On top of that, the frontman also revealed that they actually recorded enough new material for a bonus EP as well.

“The Times Of Grace record is done. We have enough songs for a full-length record and then enough songs for an EP afterwards, if we choose to… We’ve decided to separate the two batches of songs. It’s done and done, and I’m extremely proud of it, and I think it’s probably the best record that Adam [Dutkiewicz, Killswitch Engage/Times Of Grace guitarist] and I have ever done in our careers.

That, and Adam took the reins on… I wanna say half the record is him leading and half is me, and then we come together on songs. So you’re gonna hear a lot more of Adam’s creativity in his voice. And I wrote a couple of songs that he sang, and he brought a whole different light to it. So I’m extremely proud of that.”

He also added the following when asked if fans can expect to hear it this year:

“I hope so. We’re pacing ourselves. We’re trying to be smart with how we’re gonna put it out, how we’re gonna present it. The last record, there was a lot of visuals to accompany the record.

I wanna make sure we roll it out in a very sort of artistic way. I want nothing more than people to get the chills on their arm and the back of their neck when they get that first taste of what we’re going for.

So we’re working diligently behind the scenes. We’re gonna find a home on a record label. We’re gonna do it independently, but it must be to a certain standard. Hell, we’ve waited this long to put this thing out, so we’re gonna make sure when we roll it out, it’s exactly how we want it to be rolled out, with the artwork and the feel and the vibe.

I just want it to be something so different and hopefully refreshing to the music community, something that people don’t see coming. We’ll see what happens.”

It looks like Times Of Grace, the band featuring Killswitch Engage‘s Adam Dutkiewicz and Jesse Leach, are planning to release new music in the near future. The band posted the below teaser:

… How long before this silence dies …

Killswitch Engage frontman Jesse Leach has offered an update on his and Adam Dutkiewicz’s Times Of Grace project. According to him, the music for the band’s next release “has been complete for a while” and he just needs to finish vocals. 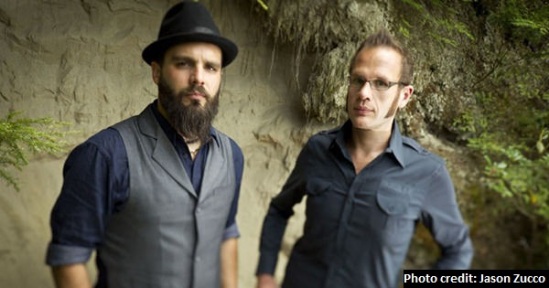 “Looking at this photo it feels like a lifetime ago since the last time @times_of_grace_music played. I even look so much different now than back in those days all bloated and perpetually drunk…The new music has been complete for a while now just waiting for me to finish vocals. Adam D has been beyond patient for me to get through what seems like many obstacles, major life changes and more time than I’d like to admit it has taken me to face my demons long enough to write.

The lyrics on this current album we are slowly working on are the deep, painful and soul searching type that can not be forced or faked. In fact even some of my most cherished ones thus far have not been up to par and I must dig deeper and deeper to find the proper words to convey what needs to be said. I want to thank my brother and musical soul mate Adam for his undying patience and sheer belief in my abilities.

Even in times when I’ve doubted if I have enough snuff to keep up with the incredible drive and talent he has graciously reminded me I am worthy. I would also like to thank the 3rd official member of this project @holycrapzombies [Dan Gluszak] for his seriously amazing skills as a drummer and musician. He has been a close friend of ours since we toured with him as our drummer.

He sounds absolutely phenomenal on this album! He had completed his drum parts over a year ago now and has been patiently waiting for the completion of vocals. Packing my bags to head to California for what I hope to be the last of two sessions to get this record done. I hope and pray I am able to produce and perform what is needed to make this album everything I feel it can be.

No teasers here just a little note from me to let you know the wheels are still in fact in motion and I am beyond honored to be a part of this project and band despite my mental and musical shortcomings and countless disbelief in myself. This one will be for the broken and wounded, this is your album…”

During a recent interview with Metal Wani, Killswitch Engage’s Adam Dutkiewicz offered an update on Times Of Grace. He said the following:

“We’ve got about five songs completed. And we don’t know if we want to release an EP or try to finish up all the songs together and release a full-length record. But my plan for the rest of the year, when I’m not touring, is to be working exclusively on the TIMES OF GRACE stuff now that the KILLSWITCH one’s done. So, yeah, I’m personally really excited to get that record out. It’s very different. And it’s gonna be a lot of fun.”

This news comes after Jesse Leach recently said he is hoping to finish the group’s next release before the end of the year.

With Killswitch Engage‘s new album “Atonement” set to be released on August 16, Jesse Leach is shifting focus to his other projects. The frontman recently confirmed that he is getting ready to record vocals for new albums from The Weapon and Times Of Grace.

Leach said the following about The Weapon:

“Last show of the @killswitchengage tour tonight then home to knock out an album with these maniacs @theweaponnyc! It’s been a long time coming but our punk rock anarchist hardcore jams will finally get some vocals on them! Great guys and killer players!!! 🏴☠️🏴
.
#TheWeaponNYC #PunkRock #Hardcore #RebelMusic #AnarcoPunk #PMA #HardcorePride”

He also added the following about Times Of Grace:

“Also on the to do list! Continuing to track vocals for the long anticipated follow up to this emotive beast of an album. @times_of_grace_music has been slowly making progress and will continue to track vocals in hope to finish our album before the end of 2019! Adam is quite anxious to wrap it up and I feel in my soul it must be done soon! It will be quite different than the last album and we are all very excited with the direction it has taken! .
Thank you for your patience it will be worth it! 🙏🏼 #TimesOfGrace”

Last show of the @killswitchengage tour tonight then home to knock out an album with these maniacs @theweaponnyc! It’s been a long time coming but our punk rock anarchist hardcore jams will finally get some vocals on them! Great guys and killer players!!! 🏴☠️🏴 . #TheWeaponNYC #PunkRock #Hardcore #RebelMusic #AnarcoPunk #PMA #HardcorePride

Also on the to do list! Continuing to track vocals for the long anticipated follow up to this emotive beast of an album. @times_of_grace_music has been slowly making progress and will continue to track vocals in hope to finish our album before the end of 2019! Adam is quite anxious to wrap it up and I feel in my soul it must be done soon! It will be quite different than the last album and we are all very excited with the direction it has taken! . Thank you for your patience it will be worth it! 🙏🏼 #TimesOfGrace

Drummer Dan Gluszak has been named an official member Times Of Grace, the band featuring Killswitch Engage‘s Adam Dutkiewicz and Jesse Leach. With this news, it has also been confirmed that Gluszak is already laying down the drums for the group’s upcoming album.

Jesse Leach (Killswitch Engage) has commented the new Times Of Grace material he is writing. You can see what he had to say in the below Instagram post:

Killswitch Engage’s Jesse Leach recently appeared on Jamey Jasta’s (Hatebreed) “The Jasta Show” and reveled that his new punk/hardcore band is called The Weapon, and that its music is “minute and a half, really quick Black Flag style kind of stuff.” A 7″ from that group is expected to be released this summer. He also talked about Times Of Grace’s new material which he says is an “even a further departure from the Killswitch sound.” He also added that it is “less metal” and “more heavy indie rock kind of post metal sounding stuff.”

It looks like Adam Dutkiewicz has demoed 13 new tracks for his and his Killswitch Engage bandmate Jesse Leach’s band Times Of Grace. Dutkiewicz said the following during a Q&A him and Leach did with Maniacs:

“We’re in the middle of getting some ideas together. I’ve demoed 13 songs, done vocals for two. So I think he’s [Jesse‘s] gotta write a bit more, and we need some time to sit down and actually go over some stuff and I think we’ll have a record.”

It looks like Times Of Grace, the side project featuring Killswitch Engage’s Jesse Leach and Adam Dutkiewicz, are working on new material once again. Leach posted the following: