During a recent appearance on “The Chuck Shute Podcast,” The Winery Dogs guitarist/vocalist Richie Kotzen offered an update on the band’s new album. He said the following:

“The Winery Dogs, the third album, the music exists. It’s been mixed. It’s been approved, and it has been mastered. So what we’re looking at now is when are we going to put it out? But the consensus seems to be that next year, 2023, will be The Winery Dogs year. I think the three of us really are excited about getting back at it. It’s been way too long.” 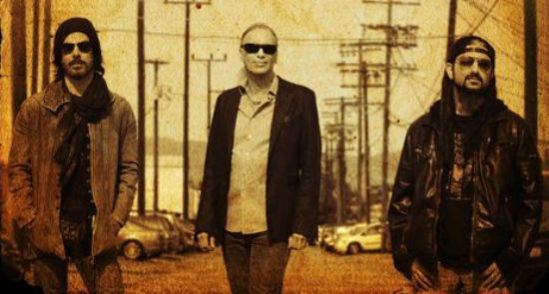 During a recent appearance on SiriusXM’s “Trunk Nation With Eddie Trunk,” Richie Kotzen offered an update on The Winery Dogs’ new album. According to him, the effort is about “85% done.”

“THE WINERY DOGS record, I would say, is probably 85 percent done. I’ve got all my guitars done and all my lead vocals and a couple of harmonies here and there. But basically now, what I’m looking to do, and what we’re looking to do, is to get Mike [Portnoy] to do some percussion and we want Billy [Sheehan] and Mike to do their vocal harmonies — you know, get their voices on there. And then once they do their harmonies and whatever percussion Mike wants to do, then I’ll take it back and maybe tweak a few things, and maybe I’ll do a couple of overdubs here and there. And it’ll be done before you know it. I think it’s gonna be done pretty quick.”

He continued when asked if the record will be released in 2022:

“That I don’t know. We didn’t really discuss when we’re gonna release it. And the thing is, like a lot of acts, I’m sure, THE WINERY DOGS is such a touring-type thing — I think a lot of the magic with that group comes together on stage — and so we wanna make sure that when we set this up that we can get out in front of people and play. And now, obviously, it’s a little choppy trying to organize all this. I think once the thing’s done and we can sit back and listen to it and it’s mixed and we can go, ‘Okay, this thing is done and ready,’ then we’re gonna come up with a plan on how to release it and when to release it. But to guess at it, the soonest, I think, would be, like, the end of this year, beginning of next year. I think that’s realistic — to set it up right and make sure that we have a way to get it out there.”

Kotzen also added the following about the album’s musical direction:

“Well, you know, we never discuss direction; we just go and write and see what comes out. But in sitting back and listening to it, as it is now in its current state, it reminds me more of the first album than the second album, only because on the second album, I think, the production, we went into a few different directions. Some of the songs — I don’t know — I think we explored some territory on the second record that didn’t exist on the first record. And this stuff, to me, sounds a little more raw, I guess you’d say — maybe more true to what the band sounds like live, like a trio. It might be ’cause I didn’t really do a lot of overdubs — it’s really just guitar, bass and drums. Like I said, I don’t know where it’s gonna end up, ’cause there’s still plenty of opportunity for me to totally fuck this thing up. Nah, I think it’s gonna be good; I think people are gonna like it. I play it in my car here and there, and I like it. Like I said, it’s just a matter of getting their voices on there — some harmonies — and some percussion. Maybe a couple of little guitar [bits] — maybe I’ll double a couple of lines here or there; that sort of thing. But I’m trying to keep it pretty raw, pretty power trio-sounding.”

During a recent interview with Tulsa Music Stream, Billy Sheehan offered an update on The Winery Dogs’ new album. According to him, the band have “about eight or 10 things ready to go” for the effort.

Sheehan had the following to say when asked if the group have started recording or if they are still writing:

“A little of both, but it’s mostly writing. We write like people used to write in the old days: the band gets together in a room and we start figuring things out. And I love it that way as opposed to getting outside writers or having one guy be the writer and everybody plays his songs. So we work together as a band quite well.”

He also added the following about the band’s writing session in early July:

“[It] went really swimmingly. We weren’t killing ourselves, but we were working hard. We’ve got about eight or 10 things ready to go. We’re gonna go back and do it again at the end of this month for another session. And if, at that point, we feel we’ve got a great record, in our humble opinion, we will go ahead and [record] it. If not, we’ll write some more.”

The Winery Dogs have officially started work on new music. Bassist Billy Sheehan tweeted the following about that:

It’s a beautiful day here in Los Angeles. And what a great reason to visit — with The Winery Dogs writing new songs! I am VERY happy and excited about this. 🍷🐾 pic.twitter.com/8gExZUh85s

The Winery Dogs have announced a May U.S. tour. This will be the band’s first trek in close to three years. 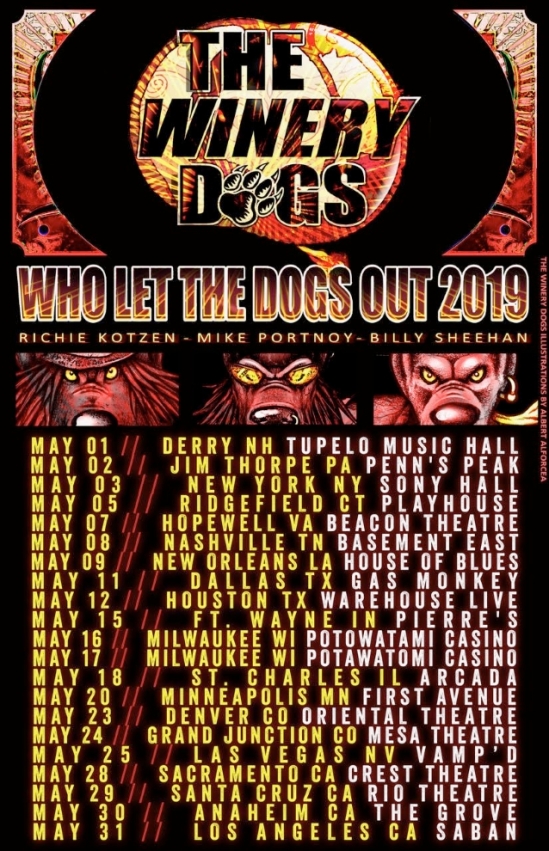 The Winery Dogs have premiered a live video for “Elevate” via Loudwire. The footage is from the band’s “Dog Years: Live In Santiago & Beyond 2013-2016” release which will be available on August 4.

The Winery Dogs have announced that they will be releasing “Dog Years: Live In Santiago & Beyond 2013-2016” on August 4. The release will come with live concert footage, music videos, and an EP of previously unreleased songs. It will be available as either a two-disc standard edition with a Blu-ray, eight music videos, and the new “Dog Years” EP, or a special five-disc deluxe edition with everything from the standard edition along with an extra DVD, and two live CDs. 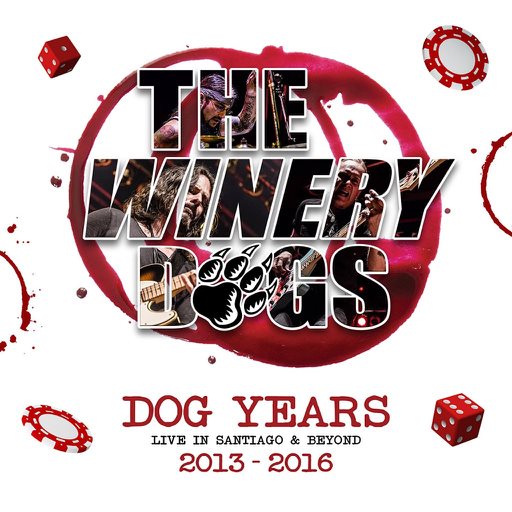 The Winery Dogs are planning to release a live DVD/Blu-ray in July featuring their May 27, 2016 performance at Teatro Cariola in Santiago, Chile, an now it appears that effort will come with an EP of previously unreleased studio tracks as well. Mike Portnoy tweeted the following:

Coming in July! It's the full Santiago concert as well as an EP of unreleased studio tracks! @LoudProudLabel will have a press release soon https://t.co/SURYeg9rZ5

The Winery Dogs, the group featuring Mike Portnoy, Billy Sheehan, and Richie Kotzen, will be taking a year off to focus on other projects, and will then regroup in 2018. Despite this, the band does have a new live CD/DVD in the works.

“We just wrapped the ‘Hot Streak’ cycle, which went for about a year and did really great all over the world. But we’re basically gonna take 2017 off. Richie’s gonna do his solo-band stuff, and I think Billy says he might be doing some MR. BIG activity. And I’m gonna spend 2017 with THE NEAL MORSE BAND for the first several months, and then possibly a new FLYING COLORS album, a new METAL ALLEGIANCE album. And also I’m gonna be doing shows with this thing called SHATTERED FORTRESS, which is me playing the DREAM THEATER ’12 Step Suite’ at select events and festivals throughout the world. So that’s my 2017. But Billy, Richie and I have penciled in tentatively reconvening after next year, and hopefully at the start of 2018. And in the meantime, I’m finishing up work on a live DVD, Blu-ray, CD for THE WINERY DOGS that we recorded in Santiago, Chile. And that should be out at the start of next year.”

The Winery Dogs have premiered a new video for their song “Captain Love.” This song is from the band’s latest album, “Hot Streak,” which is available now.