The Obsessed frontman Scott “Wino” Weinrich has dropped off the 2021 Psycho Las Vegas festival after taking issue with the event’s mask mandate. The musician made the announcement on social media, while also peddling insane conspiracy theories regarding the coronavirus pandemic.

“Two evenings ago, I received an email from ‘Psycho Las Vegas‘, wherein they informed me, and other artists, that this event would require that all people, attendees and artists, wear a mask at ALL times indoors. The exception only being while singing on stage, all non-singing musicians, band members, etc. are required to be masked during the performance. This includes drummers. Also, as soon as the performance is over, artists will be required to re-don masks in backstage, front of house, vip lounges, and common areas.

I have dug very deep when researching covid-19 not just on youtube, but in scientific publications, journals, lectures, etc. I BELIEVE THE VIRUS EXISTS, and has been weaponized as has been proven in congressional hearings where the evidence is overwhelming. Our govt (NIH) has been complicit in the financing, and shared scientific lab work creating a SARS based super coronavirus, designed specifically for lethality and easy dissemination amongst the human population.

Bio-weapons are nothing new, but in my personal opinion pure evil. Early on in the so called pandemic it was stated by the CDC that PCR tests were inaccurate in determining if one had the virus, because they are designed for individuals who already were symptomatic. The CDC quickly backtracked as it was a desirable test to cause FALSE POSITIVES. Also, the Innova rapid tests have been recalled by the FDA for also giving inaccurate results.

Mainstream media did not report this, and these tests are still in use. A paper mask was also first said by the WHO and so called experts to be useless against the virus, then of course the official word was again changed. My personal beliefs are: We are under the authoritarian cloak of a small cadre of unelected so called “elite” who are beyond rich and consequently consider themselves above the common man.

This virus I believe was created as a depopulation tool, and the fear associated with it as a means to subjugate and enslave you and I, the common people. I cannot, in good conscious, perform my music in an environment that is designed to take away individuality, civil liberties and free will.

I will not be performing this night at Psycho Las Vegas, not out of fear, but principle. If we, the people, continue to blindly accept this tyranny we are destined for enslavement. These are my personal views, but I urge everyone to dig deep. My apologies to my friends and fans, but it’s time to wake up.

Notably, this news comes after The Skull frontman Eric Wagner was hospitalized with COVID pneumonia following the band’s recent shows with The Obsessed.

The Obsessed and The Skull have announced a summer U.S. tour. You can find the dates for that run below. 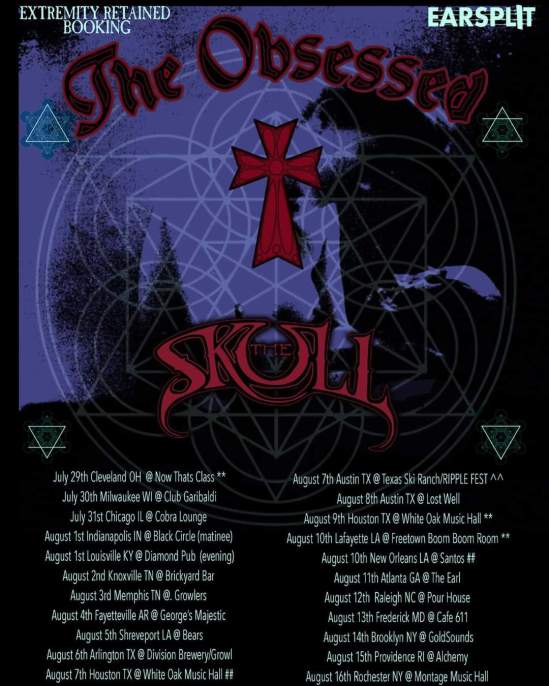 The Obsessed are streaming a remastered version of their song “Spirit Caravan.” This version of the track is from the new “Ultimate Edition” of their previously out of print rarities collection, “Incarnate,” which will be released on vinyl on October 24 as part of Record Store Day. Scott “Wino” Weinreich commented:

“[It’s] about making life as good and sweet as possible against a myriad of odds, and our strength which is the music and family created in its wake.”

The Obsessed will be celebrating their 40th anniversary with a new live release titled “Live At Big Dipper.” The effort, which will be available on August 21, features a rough recording from an early show that drummer Dave “The Slave” Flood, bassist Mark “Professor Dark” Laue, and singer/guitarist Scott “Wino” Weinrichat played at the Big Dipper in Maryland, as well as several demos.

A description of the release was shared on Bandcamp:

“Live at Big Dipper is an authorized bootleg of Wino’s favorite-ever show with the original Obsessed lineup from the early 80s. We say “bootleg” because it’s a noisy, scratchy recording rescued from a worn aging tape that sounds like it was stored in a tool shed for 35 years. But despite the raw recroding, the performances are magic, and you can hear why this is a critical document of a seminal band at the peak of their early powers.”

“Years of spinning our wheels culminated in The Obsessed being known as a formidable live band, with a strange metal-glam-punk look. This show at the Big Dipper was one of the last if not the last show of the OG Obsessed lineup, and it’s my favorite by far. It’s raw and noisy and took some cleanin’ up, but here it is. If it ain’t heavy, it ain’t shit!!!” 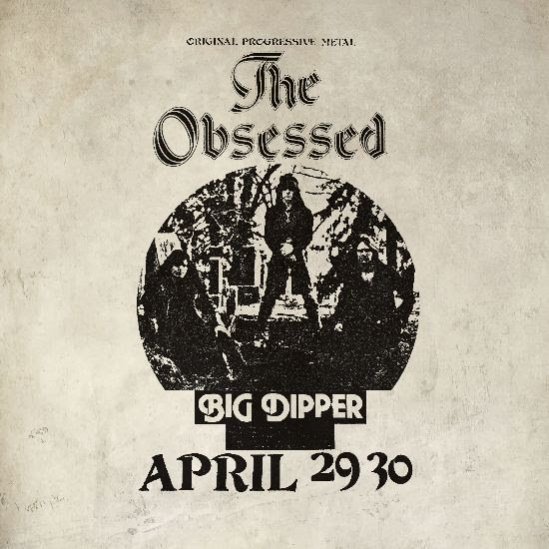 Eyehategod and The Obsessed have announced a September U.S. tour together. You can see the dates for that run below. 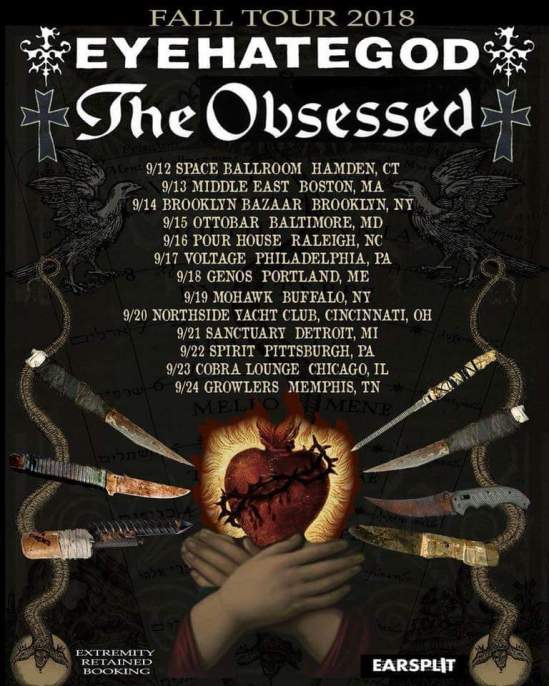 The Obsessed have shared a video of them performing an acoustic version of “Freedom” at the Gibson Guitar Recording Studio in New York City. Check that out below:

The Obsessed are streaming a 1985 live version of “Tombstone Highway,” via Decibel. This version of the track is from the upcoming reissue of the band’s self-titled debut album (out November 17). The effort has been remastered and will come with previously unreleased bonus tracks, including their “Concrete Cancer” demo and live tracks. It will also come with expanded artwork, previously unseen photos, and extended liner notes by Scott “Wino” Weinrich.

The Obsessed will be reissuing their self-titled debut album on November 17. The effort has been remastered and will come with previously unreleased bonus tracks, including their “Concrete Cancer” demo and live tracks from a 1985 concert in Washington, D.C. It will also come with expanded artwork, previously unseen photos, and extended liner notes by Scott “Wino” Weinrich. The album will be available as a 2xCD set, a single LP, a 2xLP set, and digitally as well. Weinrich said the following:

“This record defines the passion, the pureness and vibrancy of youth, and the fierce love, loyalty and dedication to this music. I am happy and proud it lives once again! Thanks to all who believe.”

The Obsessed have announced a 2017 U.S. tour. Cobalt and Iron Tongue will join them on select dates. 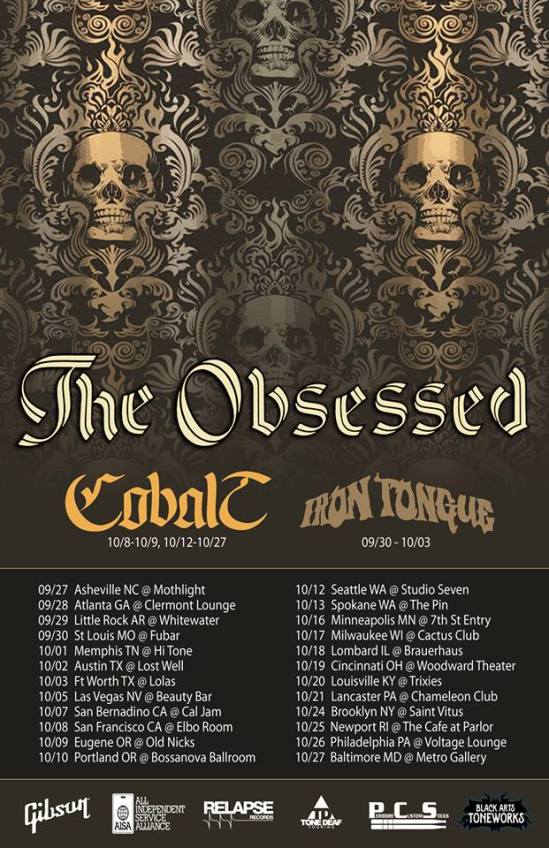 The Obsessed have premiered a new video for their song “Sacred.” This song is the title track of the band’s new album, which was released today (April 7).