During a recent interview with Overdrive.ie, Municipal Waste’s Tony Foresta revealed that the band are “sitting on a lot of new material.” He said the following:

“…To be honest we’re sitting on a lot of new material and I reckon we’re just gonna go for another album. It took us five years to make ‘Slime…‘ and now we’re only 2 years deep and we’re ready to go again! I’ve been so busy with Iron Reagan and Municipal… that I’m actually taking 5/6 months off, just because I’m fucking overworked. It’s finally come to a point where I’ve hit a wall with both projects and I’m exhausted from it.”

Obituary, Municipal Waste, Exhorder, and Nasty Savage will be performing at the “Metalcade 2020 …And Justice For Brawl” festival in Tampa, FL during “WrestleMania” weekend. The event will take place at Cigar City Brewing on April 4. 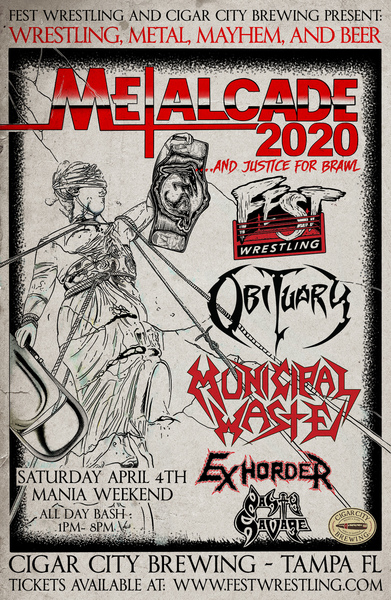 Municipal Waste will be releasing a new EP titled “The Last Rager” on October 11. The effort will feature four songs including the title track, “Wave Of Death,” “Car-Nivore (Street Meat)” and “Rum For Your Life.” An official video for “Wave Of Death” can be found below:

Municipal Waste have announced a European/UK tour with Toxic Holocaust, Enforcer, and Skeletal Remains. You can find the dates for that run below. 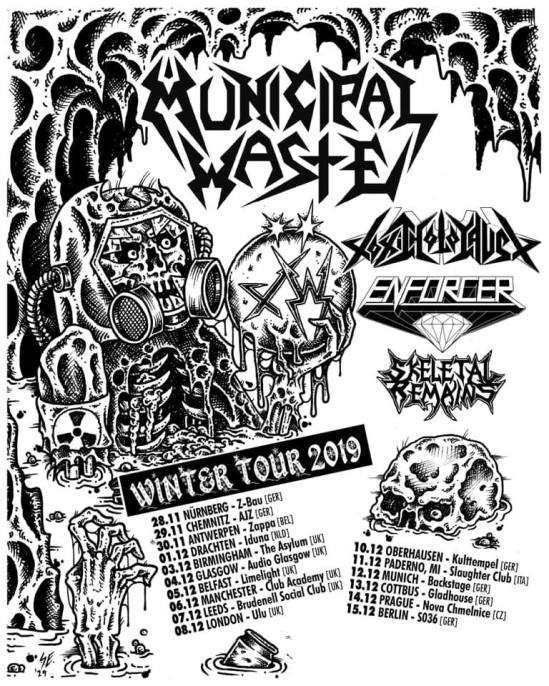 Municipal Waste and Napalm Death have announced a fall co-headlining tour. Sick Of It All and Take Offense will serve as support. Revocation, Voivod, Psycroptic, Skeletal Remains, Conjurer, Dropdead, and Evildead will also perform on select dates. 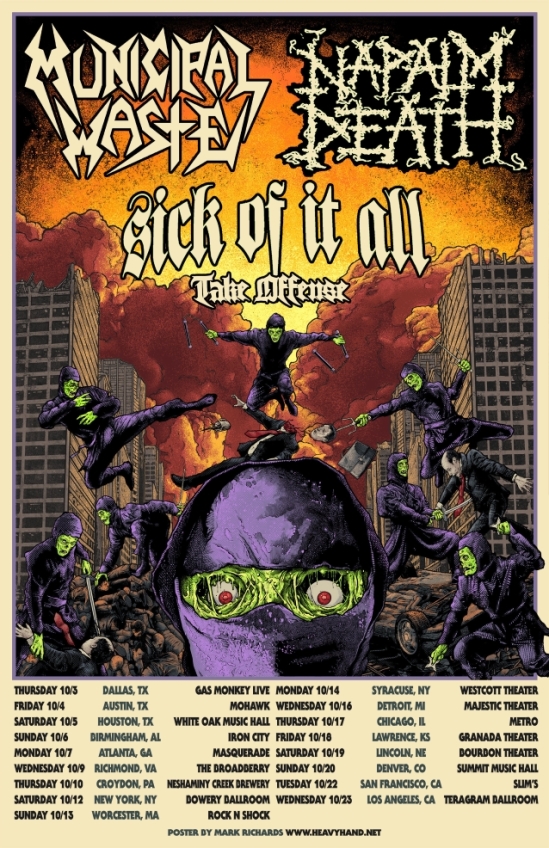 It looks like Municipal Waste will be releasing a new EP around October or November. Tony Foresta confirmed the news on Jamey Jasta‘s (Hatebreed) “The Jasta Show” and also had the following to say about the effort:

“We have another release down the pipe—which is pretty crazy, we have a EP—we went back after ‘Slime And Punishment‘, this isn’t like extra songs off the album. We went back and wrote a few songs and they fucking rip. So right after this tour I’m going into the studio like three days after this and gonna track some shit. It’s already written. It’s and EP, not an LP. It’s like six songs, it rips.”

Municipal Waste and High On Fire have announced a fall co-headlining tour. Toxic Holocaust and Haunt will serve as support. 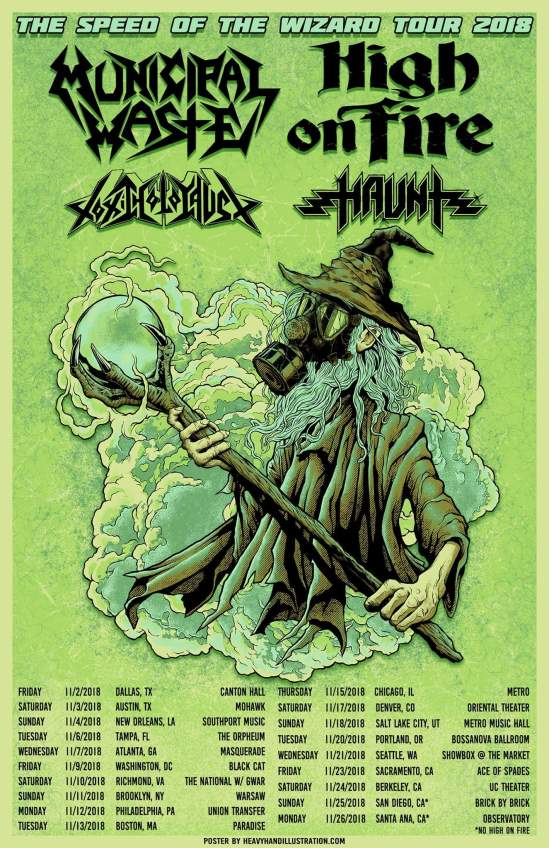 Municipal Waste have premiered a new video for the title track of their latest album “Slime And Punishment.” You can check that out below:

“Teaming up with Norman Cabrera for this video was a match made in horror. His 35 years experience with practical FX in film shined through as you‘ll see in this latest Waste clip. Not only a fan of monsters, he’s a metal lifer like us, so we saw eye to eye on the aesthetic of everything involved.

Initially, Norman approached me to make a mask for Municipal Waste, which has been his specialty for many years. I said why don’t you do us one better and make a damn video?! He leaped on the opportunity and even stepped up as the director, as well as the effects designer, making multiple masks and creating the horrific world of ‘Slime And Punishment‘.

We all grew up on VHS and that played a major inspiring role in the video as well. It was like making a movie, all the work that went into this and there are countless people to thank. I have to give shout-outs to Slasher Dave for composing the intro score and Joel Grind for taking us out with the synth outro, bookending this nightmare perfectly.”

In other news, the band also have the following dates booked: 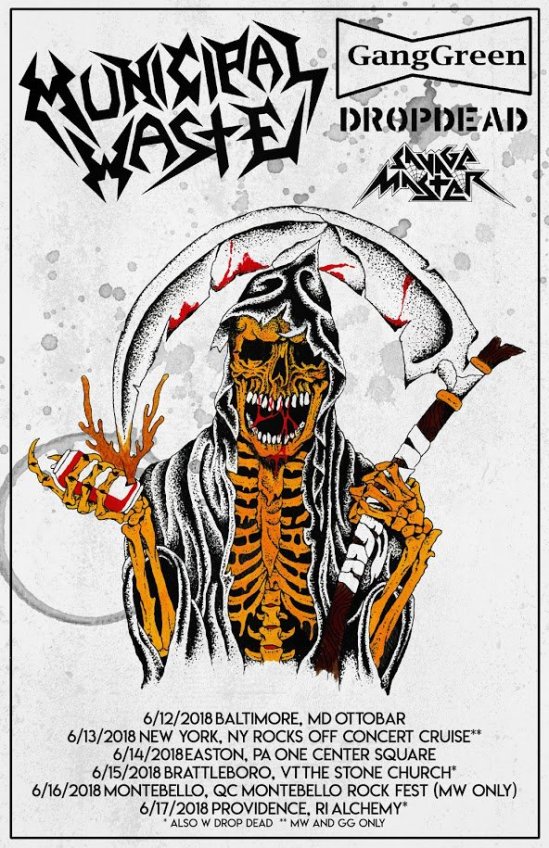 Exodus and Municipal Waste have announced that they will be heading out on the “Mr. Pickles Thrashtacular Tour.” The trek is sponsored by Adult Swim‘s animated series “Mr. Pickles,” and it will kickoff around the February 25 season three premiere of the show. 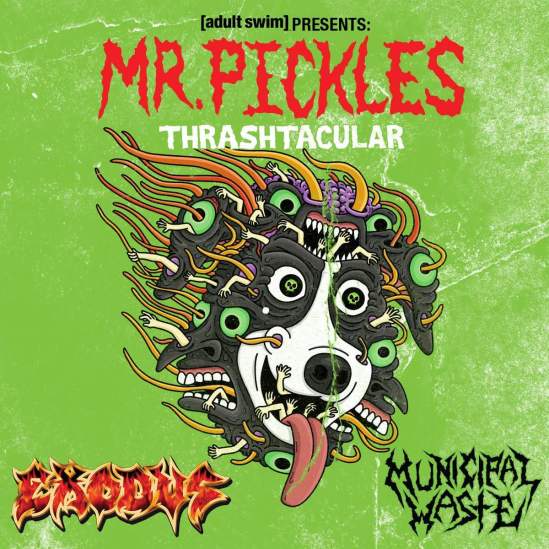 “Super excited to hit the road again with our good bros in Municipal Waste for the Adult Swim’s ‘Mr. Pickles Thrashtacular’ tour! This will be a thrash extravaganza at its finest!!!! Can’t wait!”

“We go way back with Will and Dave, the creators of Mr. Pickles. They come from Richmond, VA as well and even shot our first music video for ‘Unleash the Bastards’. We’ve remained good friends throughout all our endeavors and when they asked us to be part of this tour there was no hesitation on our part.

The icing on the cake was when Exodus came on board. We’re no stranger to touring with these maniacs and we’ve shared some wild times on the road over the years (at least from what I can remember!) It’s gonna be one helluva trip, hitting the US club circuit with our brothers in Exodus and seeing our old friends along the way.”