Massacre will be releasing a new EP, titled “Mythos,” on July 1. Pre-orders can be found HERE. 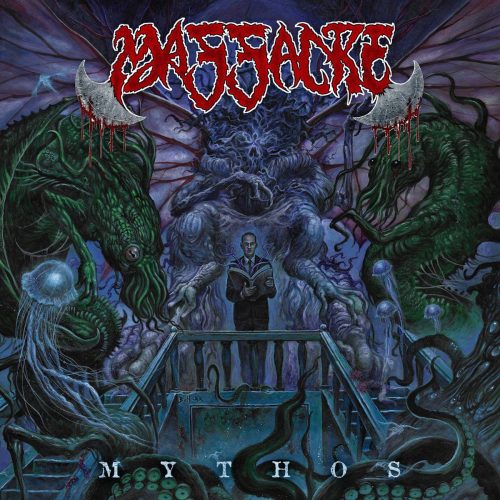 The first two singles, “Behind The Serpent’s Curse” and “The Dunwich Horror,” can be found below. Vocalist Kam Lee said the following about those tracks:

“‘Behind The Serpent’s Curse‘ is lyrically inspired by and roughly based on the Lovecraft short story “The Curse Of Yig,” but is also the most metaphorically lyrical based song I’ve written in Massacre, and that is directly inspired by actual real life circumstances. It acts like a warning of sorts and is a foretelling of how it’s been like dealing with certain toxic individuals in my life. It indirectly relates to individuals whom always seem to come in pairs, and how, like serpents these people spread their venomous poison (lies).

I also had guest vocalist Anders Odden (Cadaver) join me on this particular track because lyrically it is very similar in theme to the Cadaver track “Feed The Pigs” that I made a guest appearance on. Having two distinct vocalist on a track that lyrically is based on the concepts of duality of untrusting individuals wasn’t just an after thought either, I always intended this track to be represented by two vocalist.

‘The Dunwich Horror‘ is a more traditional track in both lyrical approach and aesthetics. It’s just basically loosely based upon the Lovecraft story of the same name, but still resonates upon the core theme of twins. Two seemingly evil brother abominations brought into this world by a grotesque and hideous matriarch. I guess one could say I am suggesting that behind every pair of twin lying toxic men is always an equally conniving female antagonist. Yeah, sure, I’m simply reflecting upon my own past experiences, but it seems to be the case in a lot of similar circumstances.

Musically both tracks are laden in the same old school death metal style that can be found on ‘Resurgence.’ It’s a sound and style that carries over and shall continue to be the core essence of Massacre under my helm.”

Massacre have premiered a new video for their new song “Return Of The Corpse Grinder.” You can find censored and uncensored versions of that clip below. The track is from the band’s new album “Resurgence,” which is available now.

“Well for starters… we made a video for RETURN OF THE CORPSE GRINDER… but it is so disgusting and foul it may be BANNED! How fucking awesome is that?!! Total Jorg Buttgereit (NEKROMANTIK films) worship! Disgusting necrophilia and Ed Gein worship – the ONLY way to do the song justice. Anything less would have been a disservice and just wimpy!! But it’s most likely too extreme for most viewers… I feel so accomplished!!

I hope fans do get to check it out… it’s a total complete tribute to the Nekromantik films and to Ed Gein being the influence to the original songs lyrics to begin with. And the songs music is just a perfect continuation in style and form – it really brings the Corpse Grinder saga full circle. Coming out of the gate with RESURGENCE and being told that video we did for the 2nd part to the Corpse Grinder may be too extreme to air is fucking brilliant!!

I am proud of the work we did on the album, the songs and material really are the essence of O.S.D.M. style and sound, and I feel this was the best team I could gather together to make this album what it is! I realize lightening couldn’t strike twice… “From Beyond” was lightening in a bottle… and it’s not going to be beat, but I did my best to bring the proper team together to make a follow up – 30 years late – that is and proves to be the proper and correct continuation of the band MASSACRE the way it was always meant to be!”

Massacre have premiered an age-restricted music video for their new song “Whisperer In Darkness.” This track is from the band’s new album “Resurgence,” which will be released on October 22. Frontman Kam Lee commented:

“This is the band’s love ballad. The first song we wrote together for the album, the one that brings us together in sweet harmony like honey and butter covered toast. It’s like a warm cozy cup of hot chocolate on a cold winter’s morning… with marsh-mellows even. Until the horrid eldritch tentacle reaches up out of the toilet and violently picks you up off your feet and slams you face first into the concrete floor. Broken teeth, spurting blood and gore as parts of your tongue are torn from your maw while this hideous creature crawls its way up your rectum. Like I said… a love ballad.”

Massacre have premiered a new song titled “Ruins Of R’lyeh.” This track is from the band’s new album “Resurgence,” which will be released on October 22. Frontman Kam Lee commented:

“I’m going to take you back down into the abyss! This track, ‘Ruins of R’lyeh,’ like many of the other’s on the ‘Resurgence‘ album are direct sequels to tracks off ‘From Beyond.’ With a purposeful musical connection to the track ‘Cryptic Realms,’ this new song of O.S.D.M. takes the listener back down into the depths of the darkness with a very heavy laden Lovecraftian lyrical direction loosely based on ‘The Call Of Cthulhu.’ Ph’nglui mglw’nafh Cthulhu R’lyeh wgah’nagl fhtagn (‘In his house at R’lyeh, dead Cthulhu waits dreaming.’)”

Massacre have premiered a new song titled “The Innsmouth Strain.” This track is from the band’s new album “Resurgence,” which will be released on October 22.

Kam Lee said the following about the new album and song:

“It’s all about Lovecraft, isn’t it? Honesty though, aesthetically Massacre needed two main things to return to be proper. A) The return to the core roots of O.S.D.M. (Old School Death Metal) style death metal that late ’80s, early ’90s sound. Musically, the record has to retain that nostalgic retro style. B) To return to the lyrical aesthetics laden with influences heavily drawn from the stories and fictional mythos that is all Lovecraftian.

‘The Innsmouth Strain’ is heavily influenced by the H.P. Lovecraft story ‘The Shadow Over Innsmouth’ yet has my own twisted take on transmutation body horror aspects thrown in. I sort of lyrically give it a David Cronenberg/Junji Ito-type spin on a Lovecraft fiction. So lyrically it is basically about body horror of aquatic transmutation. Any deeper meaning then that is just speculative, but could simply be metaphor for our world’s current situation with the pandemic and other threats of the spreading of viral infection. Musically it’s just proper O.S.D.M. the way it’s meant to be played and properly represented by Massacre.”

Massacre have signed a new deal with Nuclear Blast Records. The band’s new album will be released through the label later this year.

“I would first like to give my appreciation to Nuclear Blast for signing Massacre. It’s a long time dream of mine to be a part of the metal family under the NB flag and I am even more so grateful that it’s with my signature band. We have a lot of plans for the future of Massacre, and what a great place to be making such a proper return other than one of the best independent metal labels in the world.”

“It’s a privilege at this point in our careers to be associated with the big name in metal labels, we did our best to make this a proper Massacre release, an authentic sounding representation of a band we started over thirty years ago.”

“For many of us at Nuclear Blast, Massacre is one of our favorite bands, and instrumental in the formative years of death metal and with their debut album alone. It paved the way to many artists to follow. It’s an honor to be working a brand new record with Kam Lee on vocals after nearly 30 years!”

“WHO IS READY FOR REAL OLD SCHOOL DEATH METAL!!!? We promised you new MASSACRE music and we are not going to let you down!! Despite recent setbacks, plans for a new MASSACRE album are still moving full speed ahead and with all guns blazing! The current lineup of legendary Kam Lee and original bassist Michael Borders have been joined by Rogga Johansson (Paganizer), Jonny Pettersson (Gods Forsaken, Wombbath, Henry Kane), Scott Fairfax (Memoriam, and As The World Dies), and drummer Brynjar Helgeton!! Prepare for the raw, uncompromising sound you expect from Massacre!! #deathmetal #oldschooldeathmetal”

“It is with both regret and relief that we announce our departure from MASSACRE.

To everyone who warned us a year ago when we joined the band: you were right.

It has been a year of severe ups and downs and unfortunately it has become a working environment we cannot be a part of any longer.

What was presented as a democracy turned out to be a dictatorship with an excruciating lack of communication.

We will not stand by and have our reputations meddled with by childish behavior.

We present ourselves as professionals and bring 110% of our beings into all of the projects we have.

We wrote and presented 14 songs for the band’s new album, provided our contacts in the industry which we have naturally/organically procured through our years of touring, only to be accused of trying to take over the band, which is a paranoid delusion. It is also unfortunate that a certain individual refused to speak on the phone to us to discuss any issue of the band, but we have no choice but to bow out of this unhealthy relationship.

We apologize to our fans and the MASSACRE fans that they will not get to hear the new album we wrote for the band… at least not as a MASSACRE album.

We cherish our time spent with Michael Borders and wish him the best of luck in his future endeavors.”

Massacre have officially welcomed The Absence’s Jeramie Kling (drums) and Taylor Nordberg (guitar) to the band. The group, whose current lineup also features original bassist Michael Borders and original vocalist Kam Lee, have also signed a new management deal with Extreme Management Group and are planning to release a new album in 2020.

“I understand for some fans that it’s hard to not be a bit jaded about a band with such an ugly history, but that is all finally about to change. I’m now in a place in the band where I’m in position to do what is right by the band’s namesake and legendary status quo. Plus, having both Jeramie and Taylor join is the best thing for the band. These members bring a sensibility and professional mindset that the band was lacking before and so urgently needed. Their talents and skill set is a refreshing and positively right direction for the band. I’m excited and looking forward to what Massacre will be doing next, and only hope the fans are just as excited.”

“We’re really stoked that Taylor and Jeramie decided to come on board. I really think it’s a good mix of new blood into our sound. While there will be no doubt when you hear the new material you’re listening to Massacre, fans will know these recent changes were for the better. We’re giving these guys free rein to be themselves, do their thing, not clone sounds and styles of past members.”

A teaser for the band’s new demo track “Cycle Of The Curse” can be found below:

Massacre have singed a new deal with the UK’s United Talent Agency under the representation of Ben Ward for all territories except North America. The band’s current lineup consists of Kam Lee (vocals), Rick Rozz (guitar), Michael Borders (bass), and Mike Mazzonetto (drums) and their upcoming tour dates can be found HERE.