Twisted Sister’s Dee Snider recently performed “We’re Not Gonna Take It” and “I Wanna Rock” live on the Canadian TV show “En Direct De L’Univers.” You can see footage of that below. The set was put on in honor of pop singer Isabelle Boulay, who considers Snider to be her favorite singer.

So I was a surprise guest on a French Canadian TV show called "En direct de l'univers" last night that honored a major French speaking recording artist Isabelle Boulay. Though her musical style is nothing like mine it turns out I am her favorite singer!https://t.co/ufbuiafzOF

Twisted Sister’s Dee Snider recently performed “We’re Not Gonna Take It” at Times Square in New York City as part of T-Mobile’s “Carrier Callout” campaign against AT&T and Verizon. The frontman tweeted the following about that:

I don't expect you to remember, but last year I was railing against AT&T for how they were treating me after being a customer for 2 decades! The gave me zero response & before switching services I swore I wasn't finished with them. Tomorrow I make good on my promise! BWAHAHAHA!! https://t.co/qcrUAuQHWb

Had fun being a 🤘#TMobilePartner and letting those other wireless 🖕 carriers know aren't going to take their rate increases! #CarrierCallout pic.twitter.com/C7AnFbZzsT

Twisted Sister’s Dee Snider has joined forces with Z2 Comics for a new graphic novel called “He’s Not Gonna Take It.” The effort, which can be pre-ordered HERE, will focus on the frontman’s fight against censorship and the PMRC. 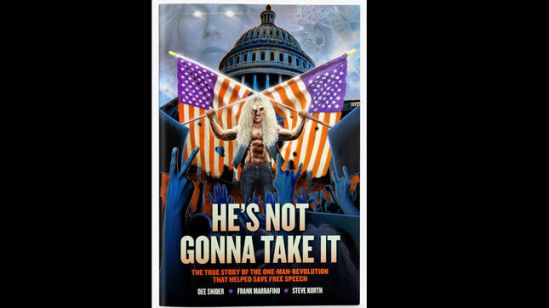 Here’s a description of the comic:

“The name of Dee Snider is synonymous with the battle for freedom of expression in the arts. This new graphic novel will follow the impact of it throughout Dee’s life. From a childhood where he was frequently silenced, through the early efforts to stifle his band’s music, to the open warfare of the PMRC hearings in Washington DC, and his current efforts on social media, ‘HE’S NOT GONNA TAKE IT’ tells the story of why free speech is so important to this man who has fought for it. Even when it endangered everything that was important to him.”

“When I look back on that historic day, I think, ‘How did I fit balls that big into those skin tight jeans!?.’ Then I reflect on the fact that I still stand for everything I stood for all those years ago…and I’m ready to do battle again.”

“Unless you grew up during the PMRC hearings, I don’t think you can really understand what a massive impact it had as teenagers watched Dee testify before congress about the importance of freedom of speech. Metal and rock preached rebellion and fighting back in the song lyrics, but here was the only frontman who was walking the walk. In a world where you thought that adults said one thing and did another, it was the moment where you could believe… Yes, there are people out there who will fight for what is right, against all odds, no matter what the cost. It’s a story that is more vital today than ever.”

Dee Snider (Twisted Sister) has signed a new publishing deal for his new fictional novel “Frats.” The singer confirmed the news on Twitter:

Just made a deal to publish my first fictional novel "Frats". More details to come as I know them…

Thanks. I am finishing the final draft of my first fiction novel. It' a period piece/coming of age story set on Long Island, NY in 1972/73 inspired by true event. No it's not my story. Next stop: book publishers https://t.co/gwhS9yBRBP

It looks like Dee Snider (Twisted Sister) currently has no plans to return to the live stage in the future. The singer says he is shifting his focus to “writing, directing and producing.”

Snider said the following while responding to a fan on Twitter:

“Charlie, I am Dee Downer tonight. No, I don’t tour anymore. I don’t even think I’ll do any more shows. I’m focusing on writing, directing and producing. Sorry man.”

He also added the following about a possible Twisted Sister reunion:

“I wouldn’t hold your breath. @TwistedSisterNY promised ourselves we wouldn’t be like every other band, doing a farewell, then coming back. We always considered that a bullshit, pussy move…. Yeah, you know who I’m talking about (every artist who pulled that shit).”

He then shared his thoughts on bands returning after doing farewell tours:

“To further expound…I don’t think any band should retire unless they want to. Stay forever; your fans don’t want you to go. But don’t say farewell, sell us the higher priced ticket, the goodbye program, and the “No More Tours” t-shirt…then come back a couple of years later!”

Dee Snider (Twisted Sister) has confirmed that his upcoming horror film will begin pre-production in June. The frontman said the following on Twitter:

“Wanna talk about a major distraction? My next scary movie (I wrote & I’m directing) is green lit & starts pre-production in 4 weeks! In between I’ve got 3 week pre-planned vacation (two years ago before covid, cancelled twice). When I get home I leave next day! Yes/Yikes!” 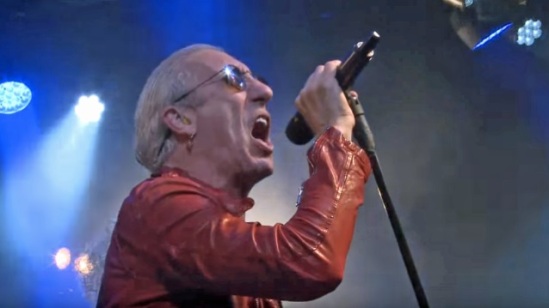 Twisted Sister’s Dee Snider was among the artists who took part in last night’s (April 4) “Concert For Ukraine” in Agoura Hills, CA. You can see footage of the frontman performing an acoustic version of “We’re Not Gonna Take It” during the event below. The show was organized to help raise money for Ukrainian refugees.

Twisted Sister’s Dee Snider has shared a new music video for “Stand” to raise awareness about the Russian invasion of Ukraine. The clip, which is titled “Stand (With Ukraine),” can be found on World United Live’s website.

“About a month ago, someone on social media told me people in Ukraine were using Twisted Sister’s ‘We’re Not Gonna Take It’ as a battle cry and asked if I was cool with it. Of course I was. My response elicited someone asking me why I was okay with Ukrainians using my song and not some other groups. I won’t repeat my exact response (it was a bit political), but that tweet went internationally viral. Every news agency in the world suddenly wanted to talk to me.

At that very moment, some great people (who were all friends of mine) were hatching the idea for World United Live and asked me if I would spearhead the organization. How could I say no? Since then, we have been beating the drum for the free world to come together, not only in support of Ukraine and condemnation of Putin, but in sending a message to the Russian people that they are misinformed and not being told the truth. Now, with the help of the likes of Arnold Schwarzenegger and many others, we are doing just that!

About a week ago, it hit me that the song ‘Stand’ from my last Napalm Records album ‘Leave A Scar’ fit the crisis in Ukraine perfectly… but I had already released a video for ‘Stand’ recently. Yet I just couldn’t get around how well the lyrics resonated with Putin’s attack on these innocent people. Ukraine was the furthest thing from my mind when I wrote the words for that song, yet it was like I had done just that. So, I had a couple of incredibly talented people (Scott Pitek and Steve Sage Goldberg) cut together a new video using some live concert footage and news clips. The result is devastating. Please watch and share ‘Stand (With Ukraine)’ and join us at www.worldunited.live. Help save the world. Together we can.”

Last night (March 5), Twisted Sister’s Dee Snider performed at the 2022 edition of Arnold Schwarzenegger’s “Arnold Sports Festival” in Columbus, OH. You can see some fan-filmed footage of that below. Snider and Schwarzenegger commented via Twitter:

Pretty incredible night last night. Had dinner with a personal hero and inspiration @Schwarzenegger! When the cameras came out he said, “Let’s do The Predator pose!” #lifegoals pic.twitter.com/lA5UyKDlif

Amazing moment last night at The Arnold Fitness Fest when I got to present ⁦@Schwarzenegger⁩, the man who inspired ⁦⁦@TwistedSisterNY⁩ biggest album, a plaque for more than 8 million albums sold worldwide! #myhero pic.twitter.com/soII96btFh

Thank you so much, @deesnider! I will treasure this and keep it on the wall in the gym to inspire me! https://t.co/xITxFQJeZs

Dee Snider (Twisted Sister) has premiered a new video for his song “Stand.” The clip features footage from the Reelz documentary “America’s Deadliest Concert: The Guest List,” which focuses on the tragic Great White concert fire. The track appears on Snider’s latest album “Leave A Scar.“ The frontman commented:

“While I didn’t write ‘Stand’ for the Station nightclub fire documentary ‘America’s Deadliest Rock Concert: The Guest List’, it is a perfect fit. The full tragedy of that horrific night was the despicable lack of support shown for a community in desperate need. ‘Stand’ speaks to the importance for us all to recognize these moments of desperation and do something about them. ‘Don’t leave your mark… leave a scar!'”