Alexisonfire will be releasing a 10″ vinyl version of their latest single “Season Of The Flood” on March 27. You can pre-order that HERE. George Pettit has since commented on the track as well:

“I’m very proud of this new song. There were some first time attempts for us and we all really came together in the studio to make this song what it is. This was also my first time singing with Dallas on a song. I know I’ve been playing in a band with Dal for almost 20 years, but damn, that guy’s voice could melt an angel.”

Alexisonfire have premiered a new song titled “Season Of The Flood.” You can check that out below:

Alexisonfire and The Distillers have announced some North American shows together. NOBRO will serve as support. Here’s the dates: 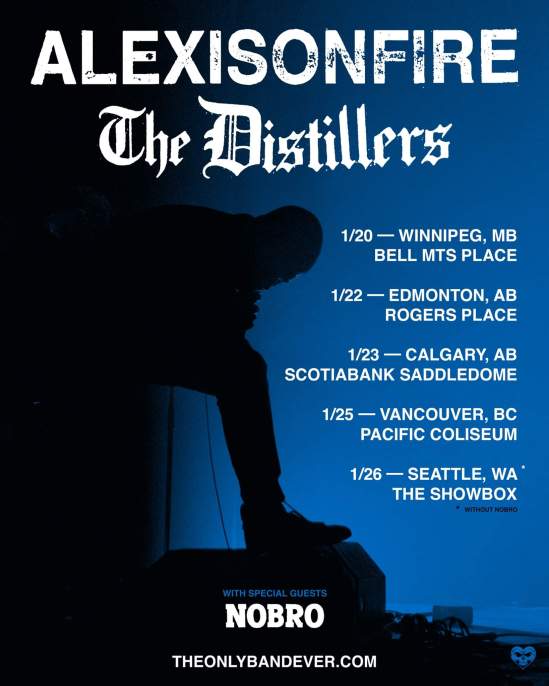 Alexisonfire have premiered a new song titled “Complicit.” This is the band’s second new track this year, following the release of “Familiar Drugs,” and it will be available on 7 inch vinyl on July 12. George Pettit commented:

“‘Complicit‘ is about recognizing the unfair advantages that we are afforded as white, heterosexual males. It’s about rejecting regressionist ideas of racism, misogyny and hetero supremacy. It’s about accepting that there is no freedom and no future in a world that is not inclusive.”

Alexisonfire have premiered a new video for their song “Familiar Drugs,” via Heavy Consequence. You can check that out below:

“Everything came together really fast. [Director] Maxxis flew into Toronto with a crew of four people, found the plainest room he could and shot us on VHS tape and cellphones in a day. We were all really drawn to the vibe of old punk documentaries and videos from the ’70s and ’80s. We asked for a lo-fi, no bullshit performance video and that’s what he delivered.”

“I thought it would be cool to put a very normal woman in this tight space with Alexisonfire performing. She represents the withdrawn and disinterested sales force that is out there moving product to make a buck — regardless of what it is. She doesn’t give a shit about this band or their music — maybe she even thinks it’s stupid. There’s no passion there, so she stands miserably in the background. a nice metaphor for life i think.”

In other news, the group have also revealed the supporting acts for their upcoming shows:

Frontman George Pettit had the following to say about the openers:

“Angel Du$t – Someone once described Angel Du$t to me as, “if a hardcore band did the “There’s Something About Mary” soundtrack”. In other words, totally sick.

Chastity – The best thing to come out of the Durham region since…since…..hmmmm…

Drug Church – Never met these guys but I love their music and I’m more than happy that bands that are much cooler than AOF are willing to play shows with us.

Glassjaw: AOF opened for them at the Opera House in Toronto in 2002. It took a couple years but we are returning the favour.

Quicksand: Heros of ours from the days when they played interesting music on late night television. Post hardcore legends in the flesh.

The Dirty Nil – Luke once brought me bacon back when he worked at a butcher…bacon bribes is a good way to get an opening slot on an AOF show. True story.”

Alexisonfire have premiered a new song titled “Familiar Drugs.” This is the band’s first track in nearly 10 years.

“‘Familiar Drugs‘ is about recognizing you need to make a change in your life, being presented with the opportunity to make that change, and then choosing to do the same thing you always do. It’s about something very specific to me but it can be taken literally or interpreted in any number of ways. Most people have something in their lives they can’t quit, substances, unhealthy relationships, lethargy, self righteousness, a job they hate. ‘Familiar Drugs‘ is about choosing comfort over self betterment.”

A seven-inch vinyl pressing of “Familiar Drugs” with a laser-etched b-side is available for pre-order HERE. It’s worth noting that a limited edition glow-in-the-dark variant will be randomly inserted throughout the entire pressing.

In other news, the band have also announced several headlining shows. $1 from each ticket sold will go towards Indspire to benefit indigenous students. Here’s the dates:

Furthermore, the group will also be performing live on ‘House Of Strombo‘ in Toronto, ON tonight (February 15). The set will feature the live debut of “Familiar Drugs” and it will be streamed live on Facebook at 8 PM EST/5 PM PST.

Alexisonfire have announced their rescheduled Toronto, ON shows. The dates, which were originally set for June, will now take place at Danforth Music Hall on December 11-15. 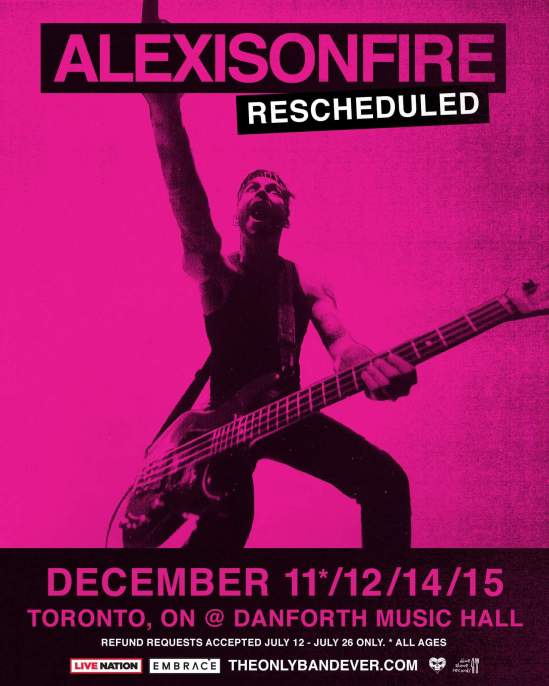 “We have rescheduled dates! We’ll be hitting Toronto this December to make up for the postponed dates last month. Thanks for your patience while we sorted this out. Please see all details below. We hope you can all make it out – see you soon.

We understand that these new dates may not work for everyone. If you can no longer make the show, you can request a refund point of purchase and by phone or email through Ticketmaster. Refund requests will be accepted from July 12 to July 26, 2017. These tickets will go on sale at a later date (to be announced in the coming weeks).”