A healthcare worker, named Cristina Settanni, recently helped talk a suicidal man down from a ledge by using lyrics from Linkin Park’s “One More Light.” The woman was driving along State Road 408 in Florida when she saw the man and decided to approach him. While sitting on the ledge with him, she recited the following lyrics: “Who cares if one more light goes out? / Well, I do.” The Orange County Sheriff’s Office posted a video report on the situation and it has since been shared by the band. You can watch that below. Sadly, Linkin Park frontman Chester Bennington took his own life in 2017.

A Life To Live, the band featuring former From Ashes To New members Chris Musser, Tim Donofrio, and Branden Kreider, have shared a moving cover of Linkin Park’s “One More Light” in honor of the late Chester Bennington. Musser commented:

“We are incredibly excited and proud to release this long overdue tribute to Chester. We wanted to take this opportunity to not only pay our respects to such an immeasurable influence on us personally and the rock world at large but also do our part to raise awareness for mental health. I have been open about my struggles with depression in the past, in hopes of letting others know it’s okay to talk about it because we are not in this alone. Any and all proceeds made from our rendition of “One More Light” will be going to charity in support of mental health awareness.”

Linkin Park have shared a new lyric video for the title track of their latest album, “One More Light.“ The clip was created by Nicola Drilling and features multiple LP street soldiers from around the world.

Linkin Park have announced that they will be celebrating the life of their late vocalist Chester Bennington with a special show on October 27 at the Hollywood Bowl in Los Angeles, CA. The show will feature numerous special guests, and proceeds from the concert will go towards Music For Relief‘s “One More Light Fund” in memory of Bennington. A pre-sale will be held tomorrow (September 19), and the general public sale will start on September 22. 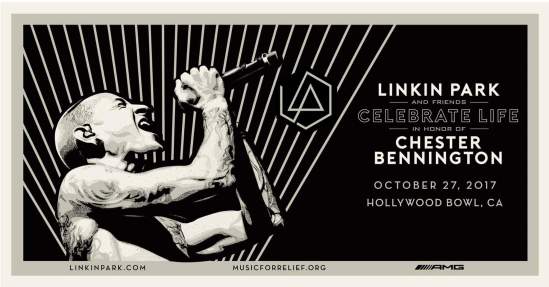 In other news, the band have also premiered a new video for the title track to their latest album, “One More Light.“ The band’s Joe Hahn directed the clip with videographer Mark Fiore.

“It has been incredibly emotional to work on this, and especially to watch it. I feel that by doing it, we not only faced some of our biggest fears, but it enabled us to use our talents to bring some light to people who need it. As we move forward to the Hollywood Bowl show and beyond, I think about the people who connect with the band, outside and inside our circle. This video is a gesture of good will to the people who want that connection.”

“‘One More Light‘ was written with the intention of sending love to those who lost someone. We now find ourselves on the receiving end. In memorial events, art, videos, and images, fans all over the world have gravitated towards this song as their declaration of love and support for the band and the memory of our dear friend, Chester. We are so very grateful and can’t wait to see you again.”

Trivium’s Matt Heafy has posted an acoustic cover of Linkin Park’s “One More Light.” He is dedicating the track to the late Chester Bennington, who sadly took his own life.

More details have now come to light in the tragic death of Chester Bennington. Joey Napoli, spokesman for the Los Angeles County Fire Department, has now told the Los Angeles Times that firefighters were called to respond to a cardiac arrest at about 9 a.m. in Palos Verdes Estates, and then left by 9:29 a.m. Police are neither confirming or denying the suicide by hanging reports. His family was not home at the time of his death, and police Captain Mark Velez has told The Daily Breeze that Bennington‘s body was found by a housekeeper. No suicide note has has been found.

Linkin Park’s Chester Bennington has committed suicide at the age of 41. According to TMZ, the vocalist hung himself at his Palos Verdes Estates residence in Los Angeles county. The Associated Press then confirmed the news and said Brian Elias, spokesman for the Los Angeles County’s coroner, told them that the death is being investigated as suicide. Bennington is survived by his six children. On another note, his death oddly happened on the same day as the late Chris Cornell‘s 53rd birthday. Bennington had sung “Hallelujah” at Cornell‘s funeral in May. R.I.P.

Shocked and heartbroken, but it's true. An official statement will come out as soon as we have one.

Coincidentally, the band released a new video for the track “Talking To Myself” off their latest album “One More Light” before this tragic news broke:

Linkin Park were the musical guests on last night’s (June 12) episode of “The Late Late Show With James Corden.” You can see footage of them performing their track “Invisible” on the show below: