Gina And The Eastern Block, Little Miss Nasty, and Heidi Shepherd (Butcher Babies) have joined forces for a new cover of Korn’s “Freak On A Leash.” You can find an official video for that track below:

“Bad Candy” directors Scott and Desiree Hansen have announced a new vampire and metal-themed horror movie called “The Virginia Bitches.” The film, which is being produced by Dallas Taylor (Maylene And The Sons Of Disaster) and Chris Dudley (Underoath), will feature a number of metal artists.

Here’s a description of the movie:

“A female death metal band who are vampires break down in a town full of cannibals led by a Warlock..”

The cast includes the following:

Fans can donate to the film and get some cool perks at Indiegogo.com.

Eyes Set To Kill have premiered a new song titled “Sink Your Teeth.” This track features Heidi Shepherd (Butcher Babies) and it will appear on the band’s new EP “Damna,” which is set to be released on December 3. Eyes Set To Kill’s Alexia Rodriguez said the following:

“Before the chaos and destruction of 2020, I had been cultivating a concept for our next music based on my own experiences with variations of loss. As the months unfolded, the idea took on a new resonance as the world collectively shared in that same experience. We were all faced to look inward, but as we started to climb our way out, I felt awakened by the power of perception and the way we choose to perceive happenings in this life. We have the power to choose to see that everything we lose occurs to help us further discover our true selves. We’re excited to unveil the chapter of Eyes Set To Kill – the era of DAMNA – and hope that together we can find some light in the darkness.”

Rue Vox has premiered a new video for her new single “90s Villain.” The clip, which can be seen below, features Butcher Babies’ Henry Flury and Heidi Shepherd as well as Five Finger Death Punch’s Chris Kael.

“90s Villain shows how our character defects can find a way to take us out in the end. I wrote this song to kind of call myself out in how I’ve been a terrible girlfriend in my past. In the video I’m a serial killer who ends up getting murdered by her would-be-victim. It symbolizes how the worst parts of us have to die, sometimes involuntarily, in order for us to truly live.”

“Rue Vox is a beast of a talent behind the microphone and her creativity doesn’t stop there. She came to me with the inspiration for her music video to be a female slasher and the epitome of a 90s Villain. We took our love of giallo films to the next level and delivered a pulp-esque style short film. We shot on Red camera with appearances by Butcher Babies and 5FDP’s Chris Kael, and all slated in the dingiest, grimiest motel on the Las Vegas Strip as each victim plays the odds with a seductress. And so the slaughterhouse began.”

Heidi Shepherd (Butcher Babies) is featured on a new Rev Theory song titled “Urinal Rodeo.” You can check out that track below. The band commented:

“This track has been a long time comin y’all! What started out as a low key collab with our homie Brandon Saller [Atreyu], quickly evolved into a beastly amalgamation of style and form. After enlisting our good friend Heidi Shepherd to lay down guest screams, she came to the table with a sick verse idea to add her signature flavor. We’ve had this one in our back pocket for a minute, and are so amped to finally unleash ‘Urinal Rodeo’!”

Over the course of four months, Butcher Babies have released three new singles and now it looks like more are on the way. Frontwomen Carla Harvey and Heidi Shepherd recently discussed their new material with Darren Paltrowitz and confirmed that they “have a ton of stuff recorded.”

Harvey said the following when asked if the band are planning to continue their series of singles:

“I think that we’re still kind of navigating that territory of what to do in a situation like this when we don’t know how long this is gonna last, we don’t know how long it’s going to be before we actually get back out on the road. So I think we’re gonna really sink our teeth into our new stuff, but kind of leave it up to destiny — how we’re gonna release it, whether it’s gonna be singles. I personally really love this whole single thing — I think it gives us something to look forward to. It’s kind of like watching your new favorite TV show. You can watch ’em all back to back, or you can wait for the new episode to come out every Friday, which I’ve been doing that with [the Disney+ American television series] ‘WandaVision’, and it’s been nice not to binge something; it’s been nice to have something to look forward to. So I kind of like this right now, especially [since] I think that everyone in the world needs something to look forward to.”

“One thing I do love about releasing singles is we really put so much time and energy into every single one of these songs. There’s not a lyric in one song that wasn’t triple thought, and we worked really hard together on it. And I think that it has been beautiful to give each of these songs the life that they deserve. And I wish that we could have done that with ‘Lilith’. There’s some songs on our last album, and I’m, like, ‘Oh, that deserved a music video. That deserved a little bit more.’ But we’re doing it now. And we do have a ton of stuff recorded. We recorded, actually, in May of 2019, so these songs are old to us. And we are also going back in the studio and recording more. So we’ll see how it comes out. But, as Carla stated, we’re having fun kind of the way it is at the moment. These all will be on an album together, but we don’t have all that info just yet.”

Scour‘s Derek Engemann and John Jarvis recently recruited 99 musicians, including members of Pantera, Trivium, Mastodon, Arch Enemy, Exodus, Testament, Butcher Babies, etc., to guest on a special “99 Bottles“ benefit single. That track has since been released and can be streamed below. Proceeds from it will be donated to Old Dog Haven in an effort to help out senior dogs. You can still contribute to the campaign via GoFundMe.

“In conjunction with our friends at Old Dog Haven and The World Famous BOOZEHOUNDZ (Derek & I’s satirical overly drunk punk band) we present the “99 Bottles” out on International Dog Day!!!”

“This has been an epically fun project involving the entire Metal scene, and even a few Ska bands! This project originally began back in 2013, but was brought back to life once we discovered Old Dog Haven. The “99 Bottles” has truly shown the good side of humanity during these wild times that we are in. I was amazed at all of the people who were eager to sign up for a verse. Winston, Clementine, Tasha, and The Boozehoundz thank everyone involved, and thank you to everyone who takes the time to give this insane track a spin!”

During a recent interview for Syfy Wire’s “Metal Crush,” Heidi Shepherd confirmed that Butcher Babies are planning to release a new single in September. The singer also talked a bit about the band’s upcoming album:

“It differs a lot. You still have the classic Butcher Babies metal behind us, but I found myself wanting to sing more. When I first started Butcher Babies, I was an angry young girl, and I had a lot to scream about. I’m a happy 35-year-old woman now, so I have a lot that I wanna sing about.” 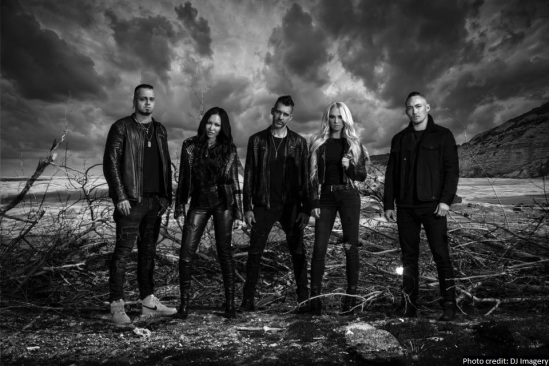 Scour‘s Derek Engemann and John Jarvis have recruited 99 musicians, including members of Pantera, Trivium, Mastodon, Arch Enemy, Exodus, Testament, Butcher Babies, etc., to contribute to a special “99 Bottles“ benefit single. The song will be released on August 26 and proceeds from it will be donated to Old Dog Haven in an effort to help out senior dogs.

“In conjunction with our friends at Old Dog Haven and The World Famous BOOZEHOUNDZ (Derek & I’s satirical overly drunk punk band) we present the “99 Bottles” out on International Dog Day!!!”

“This has been an epically fun project involving the entire Metal scene, and even a few Ska bands! This project originally began back in 2013, but was brought back to life once we discovered Old Dog Haven. The “99 Bottles” has truly shown the good side of humanity during these wild times that we are in. I was amazed at all of the people who were eager to sign up for a verse. Winston, Clementine, Tasha, and The Boozehoundz thank everyone involved, and thank you to everyone who takes the time to give this insane track a spin!”

You can donate via GoFundMe and find the full list of guests below:

Syfy have announced a special “Metal Crush Monday” series. Starting August 3, the channel will be airing sci-fi, fantasy, and horror films, while also sharing interviews that Whitney Moore conducted with members of Slipknot, Korn, Anthrax, GWAR, and more, who share a love for the aforementioned genres. Fans will also be able to find more in-depth interviews with the artists via Syfy Wire’s YouTube page and as part of a new limited series podcast.

“We know there’s a natural connection between fans of metal and genre. Syfy is bringing both together in a way that may seem surprising to some, but makes perfect sense to us.”